I Run For Integrity 15k: It's All Mental

My target time for this race was 1:33 which would give me a 2 min PR. I settled in nicely from the gun start as we made our way to Buendia. I told myself to limit my pace in this part since I still have a lot to go heading back to hilly BGC. Unfortunately, I gave in to the descent of Buendia Avenue towards the railroad crossing as I logged in about 6:00-ish/km laps.

I still felt ok as I made the Buendia turnaround. Took my GU inside km8 which digested just in time for the challenging incline of the Buendia flyover back route. I was able to run this part but pace slowed down. Still, it was a feat (or was it a relief?) for not having to walk this part of the race.

My K-Swiss K-Ruuz performed well especially when I doused myself with the ice-cold water as it was able to drain away the water through its outsole holes. However, I lost about 30 seconds when one of my shoe laces got loose (argghhh!!!). The other problem was that my left sock felt loose when it became wet, with a 1cm sized blister under my foot as a reminder. I'll probably go sockless with these shoes (and secure the laces) next time.

I could say that the hardest part of the race route was the long climb of the Buendia flyover up to BGC and the whole climb along 26th street. This was where I fought all the urge to walk and tried to keep myself in control. "Mental folders," as 2010 Kona Ironman champ @Maccanow said it in his book. Yup, I'm glad I read that part.

By the last 2km I calculated that I have a very tight window of beating 1:35. I gave it my all up to the finish but I was only able to manage 1:35:46 (Garmin time). I missed my PR by a mere 19secs! Much of the blame I think could be on that part where I had to tie my shoelaces (sigh).

But I was glad to nearly replicate my 15k PR. It was still a good race. I learned from this one that I can still maintain a good pace if I have my mind (and shoelaces, hehehe) set on it. 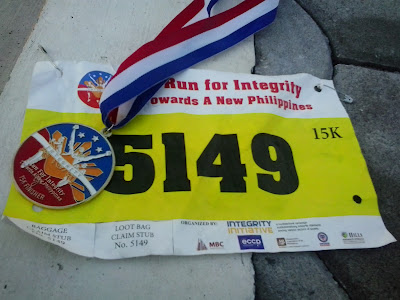