I think our young (at-heart) runner-bloggers (a.k.a. Reinier, Rene, and Jovie) can attest to the existence of this (since I doubt my folks attended one when I was young): 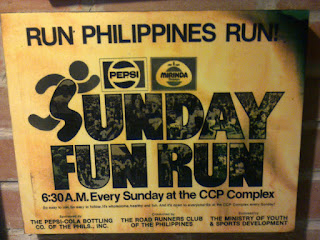 Found it while having dinner at Red Crab, T. Morato last night, among a collage of laminated posters from the past. Think Champoy, OG must be crazy, etc.

"She credits therapy and long runs with helping her deal with the last nine months, and she also kept a journal of her thoughts and emotions."
---Associated Press interview on Elin Nordegren
Posted by daytripper1021 at Thursday, August 26, 2010 5 comments: 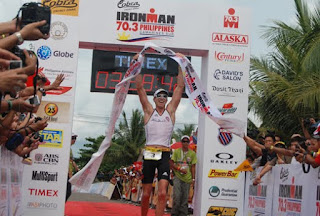 Congrats to all who joined yesterday's Camsur 70.3! You are all awesome!

Btw, you can check out the race results here.

Yeah, I'm jealous of these ironmen/women. Triathlon seems to be a hard sport since you need to learn 3 disciplines. Training must be more intense than for a marathon?

As I crept back to bed from playing with my 1-yr old, my wife asked why I didn't run this morning. According to the Excel makeshift calendar I made, today was my rest day.

I made my own calendar to control my weekly mileage increase (something I've never done) to prevent me from reinjuring my left knee. I'm only allowed to increase my total weekly mileage to 10% as many have prescribed over the 'net. Although I did some VMO exercises this morning for my knees, today was a welcome break from running.

Absence makes the heart grow fonder as they'd say. I guess it goes the same for running.

The video below captures Ryan Hall (in his nyort-nyorts, hehe) in super slow-mo when he ran the 2010 Boston Marathon. It's amazing how elite runners like him could come up with such a perfect running gait/stride. When you think that he'll be heel-striking, at the last second he strikes the ground midfoot first, and cycles his foot back, way way up to complete the gait cycle. His lean is perfect as well, a straight line from the ankles to his head throughout.


Well I'll never run like that. But maybe, with the proper training, yes. For now, I'll be contented with watching this video I recorded one morning last week. With my trusty digicam and tripod on the other side of the street, I proceeded with recording my running gait using my new Newtons. A few clicks here and there with Windows Movie Maker, I am pleased to present, my current running gait:

I have to admit, watching myself run has been mind-opening. All this time I thought I was running "by the book," but the video tells otherwise. It has helped me create my "need to improve" list. Based on what I've been reading and watching all over the Internet, the following are my observations:

- The Newtons had helped me run midfoot-strike, although my feet are still landing slightly before my hip (must be under according to Chi running).

- My arms are swinging too close to my body's midline. I've a really bad arm swing.

- Need to work on that lean (especially downhill)

I encourage you guys to take a video of yourself running as well. Just don't do it with too many people around or you might get confused as an actor/actress filming the latest takbo.ph commercial. Hehehe...

I've just read an article at runningtimes.com. It's a good read, especially for those like me struggling to find an efficient, injury-free running form. Click here for the article.
Further, here's a helpful video from Danny Dreyer, author of Chi Running, discussing how to avoid heel-striking.

Well, if all else fails, just remember to watch little children as they run. Most often, they have perfect form.

Rexona Run: Just About There

When in usual races I'm already inside the starting corral stretched and warmed-up, I found myself at a different area.....

.....I was at the last traffic light just before reaching MOA. Waiting for it to turn green was taking so long that I resorted to changing to my Adidas yellow singlet, attach my 305 and HRM, and take in a pack of Hammer Gel, all while in the car.

I was able to find parking space just across San Mig Avenue near Manila Bay. I jumped right out of the car and ran toward the starting arc. Man, whatever dreams of finishing sub-30 are gone now, I thought, as I reached the arc and started my 305. I couldn't decipher which time among the top of the arc was for the 5k'ers since I noticed that I was just about the end of the race pack.


And so the race begins

Well I was definitely late. Any dream of finishing sub-30 gun-time wise would be impossible at this point.....

....but not D-TAG wise. I could still do it. Although a sub-30 D-TAG finish time would not be posted in my blog's "my races" column, it will still be a good confidence booster especially now that I'm hoping to do "subs" in my future races (as is everyone's goal is).

I felt that I was definitely zooming since I was squeezing in and out the 5k runners/walkers. My pace was sub-6:00/km as I tried to claw my way to the front and hopefully reach the sub-30 runners. I was passing everyone from km1-3. Everything was going well until km3.....

...The 3km runners/walkers had intersected with the 5km route.

I had to double my effort in passing thru the other runners. By km4 I only saw a few 5km runners left but still a whole lot of 3k'ers. My 305 read 20mins. With less than 2k to go, sub-30 might just be there (D-TAG wise).

With about 300meters left, I resorted to going back to my normal pre-Newton gait to see if I can sprint it. Big mistake as I somehow slowed down (km5 would register 6:02 in my 305). I was doing well with midfoot striking but felt that I wasn't going that fast (although I WAS fast). Big mistake really as it probably chewed up 10secs from my finish time. Should've sticked to midfoot-strike.

5k fun runs seem to be that: fun. That should what makes this sport feel in the first place. The full-mary training that I had was very demanding so much so that it zapped the fun out of it, which made my Milo 42k pre-race anthem to be to "just get it over with" which, in post-mortem, seemed to be a bad way to psych oneself from starting his very first full marathon.

5k's are all about fun but at the same time getting serious with speed. It was a big ego-boost as I calculated I finished among the top 8% of the 5k runners (#248 out of 2867). I couldn't believe that all those people I passed accounted for some 92% of the whole batch. Further, being in front of the crowd to get all the freebies was good as well as I went back to the car to exit MOA fast before the other cars start rolling home.

A big plus as well was that I got to spend more mornings with my family (my 1-yr old wakes up at 5am while my 4-yr old wakes up at 6-7am, making long runs impossible and with a guilty feeling of neglecting daddy-duties). 5k training need not be serious distance-wise but more on speed. So I got to balance my time with my sons better the past few weeks.

Yup, most definitely another 5k race this month.

Thanks RunRio for a well-organized race!
Posted by daytripper1021 at Monday, August 02, 2010 2 comments: