Trainingpeaks TSS was at 6+, which meant that the 1 week cram for taper may somehow work. I was able to put in a tempo and speedwork session 2 weeks prior to race day so hopefully that will carry me here. Plan was to pace Run1 at 6:30/km, Bike at 27-28kmh, and Run2 at 6:00/km. Gels must be taken every 30mins as prescribed. My standing PR for a 4-25-4 duathlon is 1:47 (2014). I am not aiming for that (yet), but finishing somewhere in that vicinity, at my current shape, would be a good boost for the season.

The delay in gun start proved one thing was for sure: by the time I start Run2, it'll be very hot. Thus, I went to the water station near the starting area and gulped as much as I can.

By 7am, we were off running.

Run1 was supposed to be 6:30/km but my Garmin (and my adrenalin) had other plans: 6:00/km. I was feeling somewhere between ok and great so I kept it at that pace, thinking that it's only 4km anyway and that I will just hydrate and recover as much as I can on the bike. Run1 finished at 25:20 with 6:06/km average pace. Took a gel after km1.

The bike was next and I was all too familiar with the Nuvali loop already, probably being my 3rd or 4th time here. I managed to do well, IMO, as I pushed the long low-grade climbs and short high-grade ones on the way to a 26.0kph average for the 27.6km ride. Slacked off probably on the downhill mainly to recover for Run2. Maybe I should've pedaled more then. Took a gel 20mins into the ride and another one just before reaching T2.

Run2 will show how much I am prepared (or not) for this race. My last duathlon, the one in Porac, saw me bonking and walking Run2. It showed that I wasn't able to pace myself during Run1 and the Bike that I had nothing left for Run2. An unforgettable experience for me. 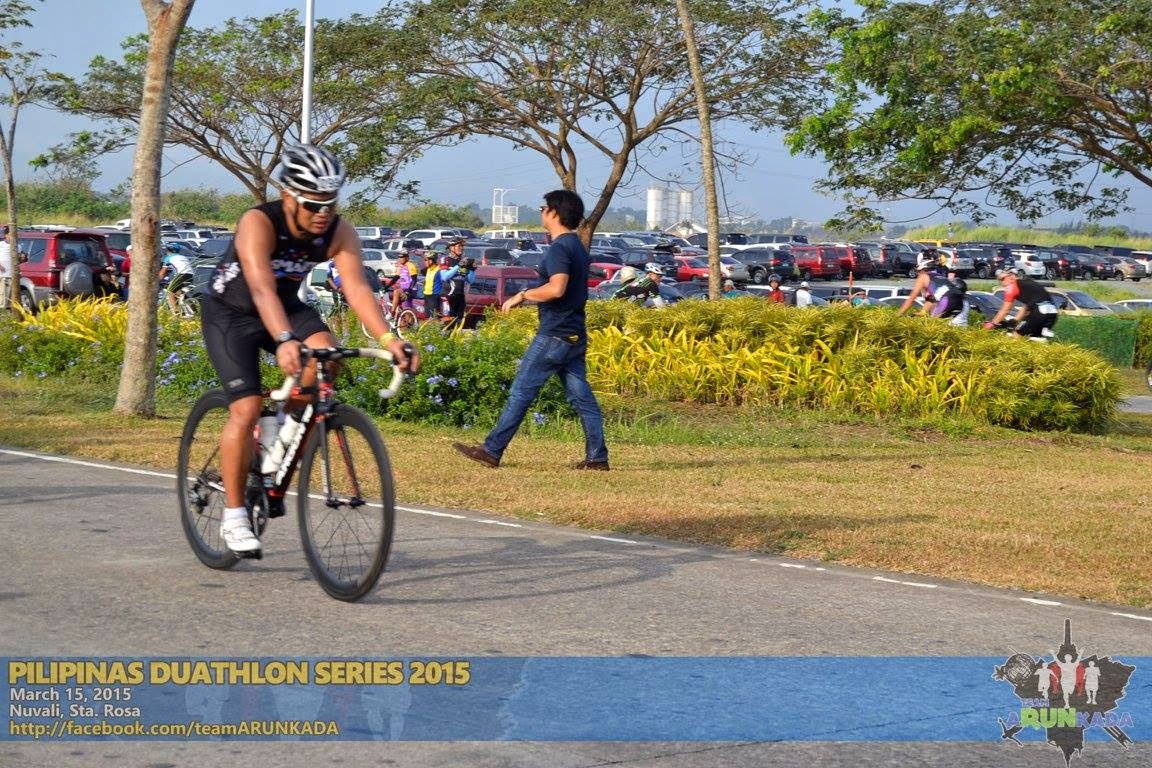 This time, I was able to pace myself well, running the 4.7km course in 6:09/km pace. I was running constantly and fully concentrated on the effort. I doused myself with water in the hydration stops so that helped, even if I think that the weather then was sunny but not that hot. I wasn't even mindful of the exceeded distance (0.77km) as I was running smoothly, IMO.

What worried me in Run2 was that average HR was at 161, with peak HR at 176. Run1 ave HR was only at 151. I may need to find out how to improve on this for the next race. Probably more bike-run brick workouts next time?

I finished the race in 2:04. Because of the added distance, if I calculate the average paces I raced with the 4-25-4 distance plus estimations on the T1 and T2 time, I may have finished at 1:55. That's pretty acceptable for me.

Definitely with a big room for improvement.

Oh well, there's always the next race to look forward to. :)


After a month since my last post, overall TP CTL value is still at 46. I hoped to reach 50 by now but family commitments during the weekends suspended most of my scheduled long rides. Maybe March will be kind to help me reach my goal.

My running TP CTL has been progressing nicely while my cycling CTL has been stagnant due to as mentioned above.

On races, a conflict in scheduling forced me not to race in last month's planned 10k in BGC. Good thing there's an upcoming duathlon next week in Nuvali: 4k-25k-4k which should be able to help me gauge as to where I am fitness wise. I hope to do well by then.

Yup, I'll report the results after the Mar15 duathlon ---which I hope to be positive.