After 2 attempts in the early part of the week to run, the left part of my groin was still hurting (see the 2k and 1k above). It was good that I had the bike to keep working out, but I needed the run.

Last Sunday afternoon (18k) I was able to make progress (finally!) by being able to execute a bike-run brick. Although the run was only for 4.7km and at a pedestrian pace (by my standards), I was happy to be running again.

Race day is coming up this weekend in Subic, the National Dua Championships. No, I'm not vying for a national team slot, hehe, but this is the same race last year (Asian Dua C'ships) that started my love for duathlons. With a great race venue that is Subic, it was automatic for me to sign up.

What's going for me coming into this race is that I've improved my bike setup and riding level (I was still a newbie cyclist last year). A new groupset (Ultegra 6800), 50mm carbon wheels, and clip-on aerobars should make me ride better at the Runway course this year. Of course, it's not (all) about the bike, so hopefully my 1-year riding riding experience will help me get a better bike split. Found out that the bike course will be the same as last year. This is gonna be F-U-N!

What worries me is my run. As I've just started recovering from a nasty groin injury, I might surrender to running the pace at easy effort. No use in forcing it but I'll see how it is by Run2. If all's well, then I will just have to make up for the time I lost during Run1.

Biking's been a lot of fun for me lately so much so that running has taken a backseat. It's a different kind of high as man and machine conquer the urban roads of the metro with varying speeds and elevation, with the wind in your face and, at times, cars by your side.

The BGC Cycle Philippines event was a celebration of the cycling lifestyle that many of us have adapted to. There were events slated for young and old, newbie or experienced. It was a weekend wherein the roads were exclusively opened for cyclists only.

I joined the 40k Challenge event and it was more than I expected.

First, the registration process was smooth and the freebies that came with it (RPJ shades, bike bag, and a nice event bike jersey) was sulit enough for P1,500.00 early-bird race fee.

Who would've known that the race itself would be great as well.

The race would start in BGC at 6am and the course took us to C5, BGC, Buendia all the way to Roxas Blvd, around Quirino Grandstand and back to BGC via Roxas and Buendia. It was great to be pedaling along the route with no concern of cars since the marshals did a pretty good job. A special thanks to the police on motor bikes that escorted us on most parts of the course ---even though we were not the lead pack.

The course, unfortunately, was about 36km only, short of the 40k target. I'm assuming that the loop behind BGC (University area) would've been a concern for the church goers nearby as it may have caused heavy traffic. But no big deal as I still enjoyed the race. 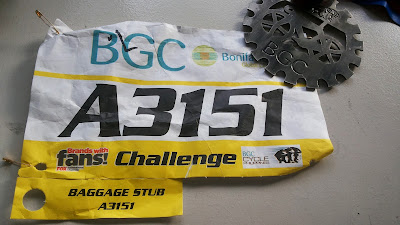 My left inner thigh complained as I started off my run, letting me grimace in pain trying to run it for 200m ---and failed. I had no other choice but turn back and walk to the house ---I was done.

I first noticed a slight pain in the same area when I started my 10k run last Saturday but it subsided. It started to increase in magnitude after my 6x400m speedwork last Tuesday morning. Ahhghh...

Searching the 'net revealed that I have groin pain. Pain in the inner left thigh....check! Pain when doing lateral movement...check! Sigh....

"Prudence is the better part of valor," I heard once before. Thus, with an ache in my heart I sadly sold my Sat Nuvali Dua racekit to a nice fella who lives in Laguna. Hope he has a good race.

The estimated recovery time of 2-4 weeks was very disappointing as I have another race on Dec.1. Yes, the National Dua C'ships in Subic which is one my A-races for duathlon (the other being the SCTEX Dua which I did last Sept).

I still have another race this weekend, the BGC Cycling event, with officemate @roadiemanila. As the groin pain doesn't appear during my recent rides, I'll still join this one (the 40k challenge) on Sunday morning. Should the pain want to show its ugly head, I'll take it easy as the bike momentum won't take much effort as compared to running.

Ugh, it sucks to be injured. The last time I had a serious injury was on my left knee when I was still a newbie with a persistent heel strike.

For now, I will be having recovery sessions with my friends Alaxan, Salonpas and Omega. ;)

I was able to work out for 6 of the 7 days last week which hopefully brings me back to full training mode.

Of note would be the Wed tempo wherein I clocked 6.17, 6.17, 6.16 on the tempo kms. The pace, or lack thereof, shows that I still have a lot to go in terms of coming back to full form. The 5lbs gained from my racing weight needs to be gone to help improve as well.

Saturday's 10k was at 1hr 27mins. The slow pace only meant that I'm back to Maffetone runs again. At age 40, this means that I cannot exceed 140 HR. But since it was my first, I opted to run at HR between 140-150. Still it was a challenge as I succumbed to walks whenever I was nearing 150, especially on the climbs. When I ran Maffetone-style last year, I was able to keep my HR less than 140 at 7.30/km or so pace. Last Sat's run just showed how aerobically-challenged my body is right now. Hopefully, with more Maffetone runs, I'll improve over time.

As I have registered for another duathlon on December 1st, I'll be taking this Sat's dua between easy and tempo effort. With the climbs at Nuvali waiting for me, it'll be better to approach this race prudently and just get acquainted with the standard dua distance in time for Dec 1. Sunday's 40k ride will be treated the same, as this'll be my first ever bike race. It'll be nice to be going around the metro with the roads open/secured for roadies like me.

This morning I took the rare chance of biking in the province of Rizal since the family stayed overnight at Thunderbird Resort (which was quite a nice place). The plan was to drive from the resort down to the main road and park the car somewhere safe before I ride. I left the car at a Petron gas station which thankfully was ok with the staff there.

The ride was supposed to be from where I parked up to Pisong Kape and head back. This also comes with a time constraint to finish at 8am in time for breakfast wth the family.

The Manila East road was smooth and even bike friendly as some of parts had bike lanes on it. Angono, my start point, to Binangonan was ok. It was as if this first 8-9kms was prepping me up for something...

I have to admit that when I saw the Morong diversion road climb, I just had to get off my bike and walk it up. It was about 100m and the climb/grade was just too much for me. By the time I got on top, it was all descent back to Manila East Road. It was only when I uploaded my Garmin logs did I find out that THAT was the highest climb of the day ---and I had to walk it (ugh!).

The road was flat again as I went through Morong and then Tanay. It was still about 10km to Pillilia, my turn around point, when my Garmin told me that I was already at the 20km mark, and it was near 8am. Unfortunately, I had to turn back to my start point. Bugarin will come, hopefully next time.

As I headed back I chose to take the Cardona Town Proper route since the Morong Diversion Road will require a longer climb back. The town road still had a long climb but not as inclined as the earlier mentioned one above. It was still a challenge though as I tread to maintain good/full effort going up which I think I did pretty well for the whole 700m stretch.

I reached the car to end my ride after 41kms in 1:55. It was 8.30am so I hurried back to the resort for the breakfast buffet/reward (hehe).

Bugarin? Well every cyclist here says one must do it, and I think I will in the future. That Pisong Kape is still something to strive for.