The day after the Rexona Run when I ran 21k after a long long while, I woke up to aches all over my body.

It was coupled with fever that reached 38C+. It was not a good day to have fever and body aches as it was my birthday that Monday.

It was a time spent with Mr. DOMS.

First time to have experienced this. Primary cause based on my training logs is the lack of conditioning prior to my 21k race. The longest I ran weeks prior was 14.7km only. For a half-marathon, long runs of 16 to 18km are most ideal.

It took me several days before I could exercise again: bike. I only started running today with a measly 3km on the treadmill.

I've definitely learned my lesson here so I'll slowly build up my runs from hereon and not force myself to race longer than 10k if the training logs prove insufficient.

Lesson learned.
Posted by daytripper1021 at Wednesday, October 30, 2013 No comments:

But as I was packing my race gear, I decided to pick up my racing flats for this race. F*ck it, I said, I'm gonna race this one.

At the starting line corral I found myself at the middle of the crowd, with Pat of Running Shield just a few inches away. He can finish this one at sub-2:00, I thought, so there's no way that I'll be able to stick by him on this one.

The crowd was split in two waves, and as this race was going to be musically funded, out came Sandwich with Raimund Marasigan egging the 21k runners with a familiar tune. I was in the second wave which was released 5 minutes after the first.

The surprise 800m from the start that Coach Rio whispered to Pat was extraordinary. It was a 100m or so tunnel that had fantastic laser/club lights that bolted the senses to run further. So this was the reason why the gun start was at 3am (which Coach Rio mentioned to me as well when I claimed my race kit the night before). Too bad that this was the only tunnel that we're going thru for the race.

I was doing well, effort-wise. Unlike in my other races, I was not being controlled by my Garmin. I was only relying on it for pace feedback based on the effort that I last put in, not to adjust because the pace was this or that. I was letting my effort do all the control.

I was surprised by my effort in the first half of the race, managing paces between 6:30-6:40. The flyovers were climbed with ease. Probably because of the adrenalin that I was getting from the music playing all over the race course.

By the 12th km my effort was still good overall, but began to wonder if my Garmin was right. Pace feedback was at 6:50-7:00. I was doing well, I thought, but how come my Garmin was saying otherwise? Oh well, I just continued on with my race strategy and not mind the Garmin.

By km18 onwards I was still feeling alright, stopping the water stations with the usual 1 gatorade + 2 water cups mix. I found myself a target guy to beat in those last 3 kms, changing leads until I was egged on by Rico Blanco's song to go all out and beat him in the end.

Wow, I couldn't be surprised by that performance. It was a great race (Runrio as usual) and I was just running on pure adrenalin all throughout. But I do believe that long runs of 14km is not enough for a half marathon race. You need a 16 or an 18 to get your body used to the distance, or else it'll fail you the next day. 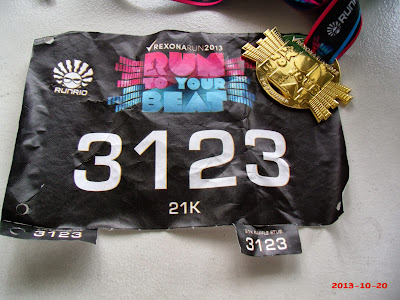 Panic at the Disco?

The Rexona Run is coming up this Sunday and it'll be my first 21k for 2013. Having preoccupied with cycling and duathlons, I reduced my road races and shied away from anything longer than 10k since January.

I forced myself to reg weeks ago for this race, as I felt the need to run longer ---something that I've been missing for quite some time now. For the past 3 weekends I managed to run longer, but probably not enough:

The recent change of office location and occasional nightshift work have reduced my morning workouts by a big deal. So much that I'm afraid that my goal this Sunday would be to simply finish. Any plan to speed up might result in hitting the wall in the latter part of this disco/rock laden race (which I'm excited for!).

I am far from being in PR-beating shape. With 6lbs gained, I really need to get the workouts (and the diet plan) back in! Hopefully Sunday's race would inject some endurance-junkie-juice back to my routine.

I hope to start by lining up a lot of races before the 2013 season ends. Apart from possibly joining the QCIM and Milo Finals 21k events, I signed up for a double-header next month (Nov16 Standard Duathlon and Nov17 a 40km challenge cycling event) and another duathlon if the Subic Dua by TRAP pushes through on December 01.

Hopefully all the training needed for all those races above will get me back into shape.

Going back to the Rexona Run, it's quite weird for RunRio to start the 21k event at 3am, which is usually reserved for full marathons. It's gonna be an early wake up call. This would mean that I need to get quality rest by Friday night.

Back-to-back races, is it (excitingly) possible? :-)

This weekend was good as I able to ride and run long (by my standards). I'm especially proud of this morning's long run, which was 2.2km longer than last weekend. As the Rexona Run is in two weeks, I just need one more long run next weekend, probably 16-18km, to boost my confidence going into the race.

Rather disappointed at myself that it took an upcoming half-marathon to force me to run long again. I really missed these "more than an hour" runs. I may have to register for more pikermis before I could finally motivate myself to run long without any race in mind. On the other hand, these upcoming races could surely wet my appetite for pikermis again:

On the bike, I am slowly getting the hang of riding long without an achy left elbow to worry. I am learning to relax my arms as I lightly grip the handlebars so much so that my clip-on aero bars have not been used as much of late. Probably I'll use them if I get another chance to ride at MoA.

I REALLY love the sound that my new aero carbon wheels make, like it's slicing through the wind as I pedal hard. Btw, I still have that 40km challenge ride coming up in mid November in BGC. That's definitely something that I can look forward to as well.

Hope you had a good training weekend too!