Training has been moving as scheduled for my next race, the Pinoy Fitness Sub1 10k on March 25. Run volume progression has been rather flat per week (long runs have been at 10k at the most lately) so my Trainingpeaks CTL chart reflected the same non-growth. Pace, however, has been improving (I think so, hehe) as reflected in my speedwork and tempo workouts, logging in with modest sub-6mpk repeatedly as much as I can. As the race is less than 2mos away I may have to dwell longer at this mad pace to be able to do a sub1 hour 10k in time for race day (which is riding on a bet with an officemate, hehe) and, of course, longer long runs to up the weekly volume.

I will be missing the Feb25 Phildua Leg1 in Clark due to family commitments so possibly no duathlons for the 1st quarter of this year. However, my bike sessions via Trainerroad have been improving for these past 3 weeks (a 13 watt increase since I started last Nov with the Low Volume Base Plan Phase 1! YEHEY!) and it's been reflected as well in my form/fitness chart in TrainingPeaks. Hopefully this progress continues as I try to balance my preparations for the above mentioned 10k race vs improving my bike FTP.

Weight, well, is still a problem. I'm still at 172lbs (as of this am's weigh in) and it's been really hard to keep away from snacking and eating like I thought I ran a full marathon. I really (REALLY!) need to start controling this so that all that run and bike training don't go to waste.

I will set my goals differently this year such that I will also include fitness/training goals aside from my target races to join in.

And so, in no particular order, here they are: 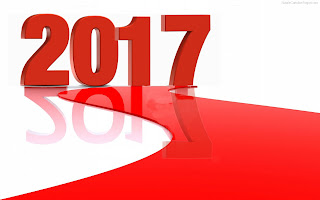 I was under trained (long run wise) and gained about 2-3lbs coming into this race. The only thing going for me here is that the race was (almost) entirely flat as it was held in a big recreational park in Taipei. The Dajia Recreational Park is a great venue for runners, bikers, and any other past time that you would like to do. It's about 2-3 (or maybe even 4?) times longer than our Rizal Park as we were able to run 21k in one loop.

Onto the race, it was great to know that Dennis (owner of Running Fatboy blog) was able to race alongside me as well. Per, his wife, was also there for support.

I was planning to improve on my last 21k (2:27:15 at Nutrilife last Oct15) but it was going to be difficult due to the lack of conditioning as mentioned above.

But the mind is a very (very!) powerful thing.

As the gun went off for the 21k runners to start, I eased right into target pace in the first 3kms (about 6:50-ish per km). The plan would be to mimic my Oct 21k strategy by pacing myself in the first 16k then going for it on the last 5.

But my eagerness had other plans, especially after I took my first gel as early as km3 (first aid station). Other gels were taken at the km9 and km16 aid stations.

I improved pace, playing between 6:45-6:50 which was a far cry from my 7:00-ish pace last Oct for the first half of the race. By km13, I saw Dennis whiz pass by me (as expected based on the race times he posted from his HM races). It was good that I didn't give chase and opted to keep myself at bay with the pace range that I was at for fear of bonking in the latter kms.

By km16 my heart rate eventually crept up in the 150s but I was still doing good pace wise. I knew I didn't have the long run preparation but I also knew that I had done 21k races many many times (although way wayyy in the past). My last 21k last Oct showed that I can still finish sub-2:30 if I willed it.

This was the driving force that I kept telling myself (along with the hope that I can catch Dennis, but, for naught) as I drove home in the last 6kms of the race. The legs started to show a little bit of weakness but I was still able to keep pace, overtaking struggling 21k runners as I closed out the remaining kms.

"This is your last race for the year," I said to myself, "Make it count! Come on!"

It was a battle to keep pace, although never in my mind did I think of stopping or walking. I was just hoping for a glimpse of the finish arc to keep my moral up but to no avail. Nevertheless, I kept my pace.

My Garmin beeped as I reached the 21st km. Still no sight of the finish arc.

The race was supposedly for 21.3km so the thought that this may exceed further than that (22? 23 kms?) worried me. Still, I pushed on as I hoped that the organizers missed it only by a bit.

Alas, after 200 meters or so, I finally saw the arc. I made a sprint for it, overtaking another runner for good measure, with my Garmin stopped at 21.6kms upon crossing the line ---my longest run for the year (and possibly for the last 2 or 3 years!).

This could've been a bigger improvement had I followed the long run training sked religiously and, more importantly, had I controlled myself from a lot of eating since October. Yup, lesson learned, but I will cherish this victory for now as a great year ender. :) 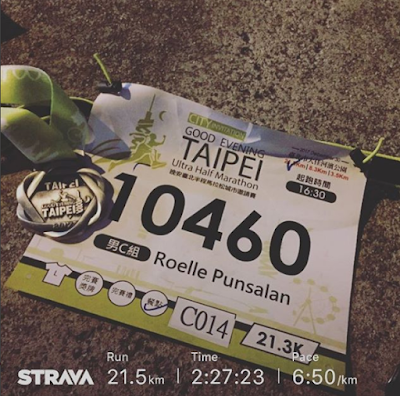