No Milo for me this year


Yup, I (lazily) made up my decision not to reg for Milo 21k in Metro Manila which is happening this Sunday (July 30). The medical certificate requirement to register became rather tedious for me as our company clinic will only issue one if I pass an ECG and XRAY exam ---which I need to take in another clinic on another company building. Sigh.

I know I know. Should've been something that I could've done if I really wanted to race but, then, adding to a lot of things to do at work (and just being plain lazy to walk 600 meters away) made me decide to skip this race....for now.

In the meantime I've been training as much as I could for my A-race (BikeKing Duathlon) happening on Aug 20. Traningpeaks CTL is near the 60s so that's a good sign.

My runs have been doing well endurance-wise but I need to inject more of those tempo/speedwork sessions in the weekdays (long runs since my Maxicare 16k have been good pace-wise ---10k and 12k). Probably add more hill repeats too will be vital ---especially on the Run2 4k on race day.

My rides have been declining mileage/hours wise but I've been compensating it by doing a lot of high intensity short bike sessions on the weekdays (Sufferfest, and mostly GCN 40-minute sessions). I hope to cover more ground bike-wise in the coming weeks. Fingers crossed.

Oh, lastly, I've been doing some yoga at home for my back pain. The one with Adriene has helped relieve the soreness of my back IMMENSELY so I'm sharing the video here which I hope you'll try as well. I will probably do more yoga (once or twice a week) to keep my back (and probably my whole body in the long run) in tip top flexible shape. :)

I was able to meet my target for this race which was to pace at or near 7:00/km throughout. I never felt the need to speed up (except for the last 2k which I'll explain later) as I never thought of "really racing" this one as this would be my longest run (16k) after quite a while which would really be an achievement in itself. The plan was simply to control the pace throughout and see how I hold up towards the latter kms. This also served as my gauge if I will ever be ready for the upcoming Milo 21k on July30 (which I haven't signed up yet) ---pace wise so that I am within the 2:30 cutoff.

I got a little worried about the 2 week taper that I did before Sunday but in retrospect, it worked out well for my benefit. The body was fresh for 16kms of sub-tempo running although the high HR is something I need to work on (jumped to 155 as early as km5). Perhaps adding a lot more Zone 2 running (or longer tempo runs) should do the job?

So onto the race. I was coasting for sub-7:00/km from the start until km11 and I thought, "Hey, maybe I can speed up a little" and so I did, running about 6:50/km for the next 3 kms. Btw, the Kalayaan flyover on the way back to BGC was still hell as ever as I pushed hard while I recorded my highest HR for the race (170).

By the time I was back in BGC there was this guy with specs and wearing wireless earphones using me as a marker (I was wearing the classic bright yellow Adidas singlet from years back) as I was easily noticeable among the blue singlets around. He would run past me then stop to walk. By the time I would pass him for a couple of meters he would do the same all over again. I knew he meant no disrespect but I guess it was just a way for him to motivate himself to finish. 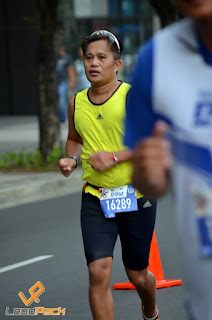 I, on the other hand, got irritated. My competitive me took control of my race pace plan and just said, "F*ck it, we're leaving this dude!"

All in all this was a good race for me even though no PR was broken. I felt really good after that race as I *think* I'm back on the groove again in terms of my running. Hopefully I could keep the weekly volume up and, just maybe, help the weight go down.

Milo 21k is coming up in 3 weeks but I'm still undecided. The race org requires a med certificate to register (plus a bought Milo pack receipt) so that is keeping me from finalizing my plan to race this one or not.

But it's Milo, right?


So Sunday's the Maxicare 16k race in BGC and I *think* I'm ready for it. I was able to peak my long run at 14.7km the other week and I am tapering nicely in time for Sunday. Just need to make sure that I keep the runs short but intense for the next couple of days (around 2 runs only) before Sunday's 4:30am early start.

As to the race strategy, I'll probably do somewhere around 7:00/km average which is a safe bet based on where I am now in terms of performance. Pushing it to 6:45/km will be excellent but let's see how my body and overall feeling responds by gun time. As always, finishing a race will be fulfilling in itself as I haven't done a 10 miler in quite a long loooong while.

Meeting my weekend long ride targets have been a challenge as I am only averaging below 40km on my weekend rides. Largely due to family commitments (my boys were enrolled to a basketball clinic on Saturday mornings), this leaves my weekend ride to the indoor trainer for 1-1.5hrs only. I just try to make up for it by upping the intensity either thru Sufferfest videos or taking the intense ones from GCN, or just coming up with my own set (Z2 and Z3 alternates, for example) to hopefully keep my bike CTL up.

I just hope that I'll be able to log in more longer rides before my A-race duathlon on Aug20 (which requires a 60km ride segment).

Body weight is still hovering between 168-169 lbs on weekdays and going back up to 170-171 lbs after the weekend binge ---this is even after 5-7hrs of training per week. I guess cutting back on the food intake is what I need to do (carbs mostly) since it seems that exercise alone is not helping. Yeah, I read about that 80-diet 20-exercise thing (sadly) so I just have to be conscious, especially during weekends. Tsk, this is hard.