High, higher than the sun
You shoot me from a gun
I need you to elevate me here
At the corner of your lips
As the orbit of your hips
Eclipse
You elevate my soul

It was probably less than 20 degrees Celsius as I woke up at 4am last Sunday to get ready. I looked at the missus and my youngest son, still in a deep slumber under the comforter on a king size bed at the hotel that we were checked-in.

SIGH, it would've been better to have dozed off instead.

Nevertheless, running amidst pine trees and under cool (as in ginaaaaaw) temperatures is a refreshing change from someone like me who regularly races in Manila wherein the smell of carbon monoxide and hot temperatures are the norm.

From the race map that I got when I registered, I knew immediately that this was going to be a knee-breaking race. Why does one sign-up for such outrageous challenges? Baguio is a place to relax, smell the pine trees, eat at Star Cafe, ride a boat at Burnham Park, take a picture with one of the locals at the Botanical Gardens, etc etc. It's not a place for someone to loose one's breath and run the risk of reinjury, right?

The answer could be very simple: because it's there.

So off we go

The starting line was at Lake Drive, Burnham Park. I estimated the total participants to be around less than 400. Gun time was supposed to be 5:30am for the 21k event but it went off at about 5:45-5:50am (I saw Roselle the RunningDiva btw joining the half marathon event). I think there were about less than 100 warriors who ran 21km that day. Man, running all the way up to MinesView is no joke! Botak finisher medals for these runners is definitely a great prize for such an enduring run.

An interesting note btw. The guest-of-honor, after wishing all the runners good luck, briefly made his election campaign ("I howp you bot por mih!"). Ayus manong! :)

Up next was me and about a hundred other runners in the 10k event which will be joined in by the 5k runners. I took a sachet of HammerGel a few minutes after the 21k runners sped off. The 5k/10k gun went off at about 6:14am. Unlike in the Manila races, take note that I'm not complaining of the late gun time here. Idling one's time away at a cool place such as Burnham Park while being kissed by the morning sun is a pleasant welcome. The gun would've went off at 8am and I still would not have cared.

There was only about 600 meters of flat road for the entire 10k course: 300meters from the starting line and then 300meters when you're on the way back to the finish line (which is where you actually started). Needless to say, this was not for the faint of heart (and knees).

Stupidly enough, I zoomed at the first 300 meters and ended up looking dazed after a 20 meter climb which I estimate to be about the same incline as the bottom of McKinley Hill. This 20m incline sort of acted as a first-pass filter, if you will, to separate unprepared runners. It was a preview of things to come.

The next 4.68 kilometers would be hill, hill, hill, and more hills. My km lap times attested to this:

Even before the start of the race, looking at the race route, beating my 1:04 PR would be laughingly impossible. I recalled that again by the 5km turnaround point, totalling 34:51 for the first half of the race.

It's true: whatever goes up, must come down. By the 5km turnaround everything was downhill. I took advantage of it, spiraling down like an avalanche. Forget the brakes! Hehehe...

I compared the elevation gain of the hill-run I made the previous week in Taguig versus this race and they came up exactly the same (353 meters). But what made these two routes different was the elevation itself. The hill-run was -48 to 91 meters while Botak Baguio measured 1447 to 1559 meters! That could've been the reason why I was always gasping for air even though my pace didn't seem all out. I guess that's why elite runners (like Ryan Hall, Josh Cox, Team Baldrunner, and Rio dela Cruz) train at high elevations to condition their lungs so that when they come down flatland for the races, it seems like it's a piece of cake to them. But that's just me over-analyzing.

The race organizers did a good job. Kilometer-markers were accurate, race marshals were there at every intersection, on-the-dot water/Gatorade stations, and of course, a superb Botak singlet. I have 3 Botak singlets, all of them made with good quality. A local brand such as Botak, should they want to launch internationally, could give Adidas and Nike a run for their money (pun intended).

There was no showbiz personality nor fireworks for this race. But I guess any race organized in Baguio is something special. I highly recommend any running enthusiast who hasn't gone racing in Baguio to do so in their lifetime. You'll definitely look differently at a pine tree (and your car's first gear) after running there. 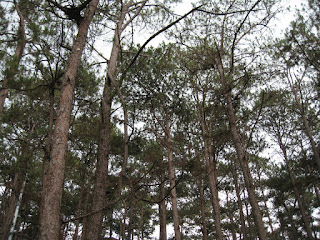 Garmin 305 stats can be seen by clicking here.