If there's one part of running that I find challenging, it has to be hills. It's so difficult to climb coz it takes a lot of effort, and it wastes a lot of precious time coz it slows down my pace ---not exactly helpful if you're in search of a new PR.

But like all challenges, I have to get over them somehow, literally and figuratively. So, a few weeks ago I've decided to sign up for Botak Baguio 10k, an obviously hilly route with merciless elevation changes.

"Pare, ibang animal ang Baguio!" was what my officemate/triathlete PC said when I told him of my next race. Though scary was his description, the guy didn't seem to listen to himself as he's planning to do a 23km Baguio long run on the same Palm Sunday race day this week. I know, he's crazy. Hehe.

This morning was a good time for my scheduled long run which I've plotted out in advance. It called for revisiting two famous running hills in Taguig: Mckinley Hill a.k.a. Magneto, and Lawton-Bayani, both of which I've inserted neatly into the planned route. 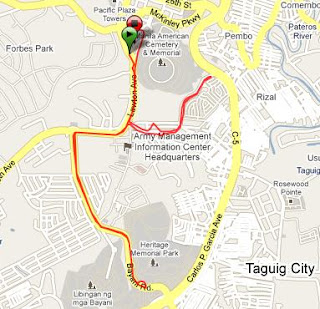 As a matter of courtesy to these paying registered runners, I didn't take a cup at any of the water stations. It was my hydration belt that served as my water source. 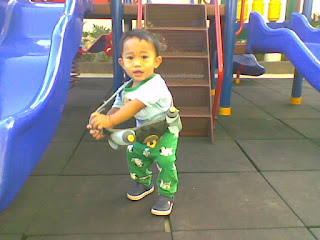 Planned pace was 7:42 mpk easy since the objective of this run was to prepare my legs to run through a hilly route.

The whole run was relaxing as I passed by some of the Globe runners that were familiar to me already by face and even by name. For once, I wasn't aiming to reach a certain time at any point of my run. I was, well, relaxed. Surprisingly, as I tackled McKinley Hill down to C5 and up by my lonesome I was still composed. It was probably because there was no pressure to run fast since this wasn't a race.

So will I be ready for Botak Baguio this coming Sunday? Hill-wise, probably yes. Change in elevation, I wouldn't exactly be sure. Mas manipis ang hangin dun, as what many might say. Like what PC said, Baguio's a very different animal.