As per my weekly training logs, for the past 3-4 weeks I've been completing only 50% of the week's scheduled workouts, with the other half completed by about 50-70% of the required volume. I will probably have the same result this week as my wife and I are set for a vacation in Japan. Sigh...

This is not good, especially that I'm less than a month away from my next duathlon in Nuvali (June 1).

Hopefully I do better in the coming weeks so I'm prepared come race day.

I didn't prepare specifically for this one since I registered for it at a request of a friend coming from Japan to race locally. Good thing there was a race conveniently scheduled here in BGC at the time of his vacation.

The 10k distance was just right since I was supposed to run a 12k tempo as per my training program. The strategy for this one was to run hard, targeting a sub-60 finish (although I wasn't really praying for one as I just wanted to get these legs a good workout).

The race started promptly at 5:30am with a good crowd joining the 10k leg. As I started from the end, I had to zigzag my way as I looked for space to run on. Eventually, the crowd thinned out by the 2nd km. The route is all too familiar of my past 10k races: 1st half downhill while the 2nd half would be a hard charge of climbs to the finish. I reminded myself of this as I past by 5th avenue, running towards the Kalayaan flyover. 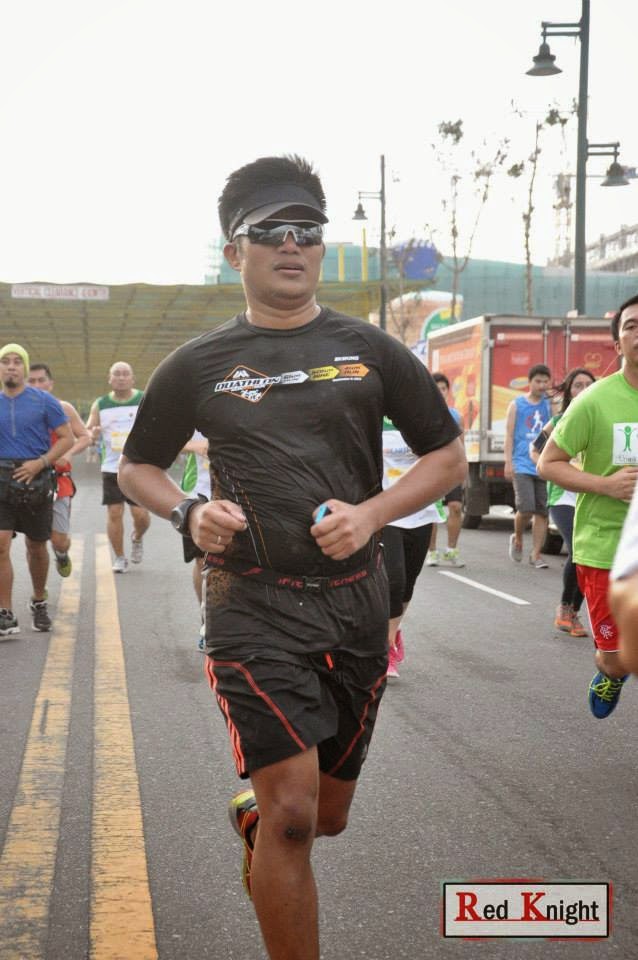 The Kalayaan flyover, as always, welcomed me with open arms as I went up towards Buendia but wanted to spit me out as I came back from the turnaround point. That climb back to the finish was very HARD. But fortunately I was able to cope with the steep long incline, albeit not at a pace that I wanted. There was another long climb at the 2nd half of Rizal Avenue, then that looooong climb at 26th. Ran very hard at the last 300-400 meters, finishing at 58:54 (Garmin time).


The celebration of finishing sub-60 may be half-hearted, as the total distance logged by my Garmin was only at 9.74km, giving me an average pace of 6:03/km ---not a sub-60 10k. The result overall, was ok for me as I only registered for this race on a whim, without really training for it. Nevertheless, it's a good checkpoint for me to remind myself that I still have lots to go, training-wise.

A friend is coming to Manila this week and is raring to race. Good thing there's one scheduled in BGC this weekend:

Quite cheap at P500.00 for a 10k racekit although it doesn't have RF-timing nor a finisher's medal. Well, I guess that's the reg fee pricing nowadays. No biggie as my friends and I will still try to have a good time. See how us 40 year olds can run this one.

And yeah, a secret goal of a sub-60 is playing in my head. Let's see if I'm up to it this Saturday morning.


I arrived at the race venue with 10 minutes to spare before the start time (whew!). I immediately put on my running shoes, locked the front wheel on my bike, and hurried to the transition area to rack my bike and other stuff.

Found myself near the end of the starting corral as 6am, gun time, arrived. Like any other dua, the pace was fast and furious for the racers as we started Run1. I saw my pace hovering at 5:15/km (too fast!!!!) so I tried to control the pace as originally intended it to be between 6:00-6:30/km. Eventually, Run1 ended at slightly below 6:00/km average.

On the bike, I was surprised with the lack of bike pace as I left the transition. I even thought that I had a flat tire so I kept looking at my rear wheel (the usual culprit). As it turned out, I was traversing a false flat (similar to how I started last year's Unilab Dua). The bike route was going to be a 50% uphill and 50% downhill loop done 4 times. I managed to keep my effort at around 6-7/10 on the uphills, then compensated on the downhills. Bike pace averaged 26.5kph based on my Cateye.

On Run2, it was a struggle starting it off as I thought that I won't be able to keep my pace on target, a result of my adrenalin rush of pace in Run1. Fortunately, I was still able to keep the pace good, this time a little ABOVE 6:00/km.

I remembered my Coach's tip, "on the last 2-3km, run on empty." Believe me, I ran my heart out on the last 2km. Red-lining on my heart rate, if I wore it that day.

Having been coached since start of Feb, this race result may not be indicative of the new training method that I'm in ---yet. Too early to confirm. But it would be interesting to know how I ranked in my age group, hmmm.

I will probably get a better gauge on how this coaching has improved once the duathlon season comes into full bloom by May, with special focus on my A-races (Unilab Dua in Sept, and Nat'l Dua in Nov).

Yup, Leg2 is on end of May. A lot of time to improve my race plan, and to continually train.