I read this short article and I could only nod in agreement as how my sports activities can affect my work and life aspects positively. In my view, this part is very true:

"...that cycling [or any sport for that matter --me] is something that keeps you happy, fit and focused.   Besides keeping us healthy, it provides us with a great deal of emotional capital that leads to increased productivity.  Many studies have shown that happy people are more creative, solve problems better and more quickly, are more self confident, and enjoy higher levels of leadership influence.  In other words, people who have passions outside of work (i.e. cycling in our case) are happier and perform better on the job.  Passionate people spend a great amount of time thinking about what they’ve accomplished, how achievable the task ahead is, and how capable they are of achieving it.  If people have one passion, it’s likely that they’ll be strongly driven in other areas of their lives as well."


It was great to see myself wearing a race bib again. My 2nd duathlon after my maiden one last Nov 2012, I didn't specifically train for Duaman other than my usual runs, rides, weights, and weekly spinning class to keep me conditioned for the challenges that this race will present.

The organizer, @swimbikerunph, did not disappoint.

The race was held in Nuvali, Santa Rosa, Laguna ---a place where I haven't done any training nor race. Based on the info I got days before the race, the route will have no tree cover and that the bike route will be challenging (which I will later find out to be both true).

By April 21, 6:30am, 600+ Duaman participants were sent off by no less than swimbikerun.ph's head honcho Carlos De Guzman who did the hosting tasks as well.

Run1 (3km) was completed just below 18mins. It was rather slow than my target 16:30 but was happy to have left some energy for the bike and run2.

The bike leg (20km) was the hard part. It consisted of a few killer climbs and rolling hills. I didn't falter on this part but finishing it in about 45-46mins proved that I still have a lot to learn on the pedals. The aerobars worked well on the flats and descents but the climbs, although doable, were a task for me. You may say my effort level here was at 8-9 out of 10. Still, it wasn't enough for this short but killer route.

Run2 (3km) was were I caught up with most of the athletes struggling (from probably giving their all on the bike). I have to admit that I have this "hidden smile" across my face while passing them one by one as I found myself very much in control of my pace. I finished this leg in probably 19mins.


I finished the race in 1:26, well within my 1:30 target. I was worried that I might lose time during T1 and T2 but I was fortunate to have practiced disengaging my feet from the cleats before bike dismount (I ran barefoot to my transition area) which saved a minute or two. Now if only I bought Yankz or that other brand  to save time on lacing up my shoes, that could've saved another minute or so.

Further, I was happy with my time since I was able to race throughout with a still recovering knee injury from my football stint several weeks ago. 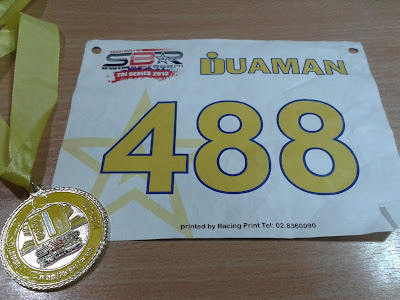 With my current condition (still with some knee injury and no long runs to my credit), I may have to postpone Marathon #5 for now. Honestly, I just find the run-bike-run gig exciting. Pacing strategy really plays a lot here since you'll find most of them who didn't pace themselves suffer in Run2. You should give your all in Run1 and Bike, but you need to leave a little something for Run2. Determining how much of that "little something" is the one that makes duathlons very interesting and exciting for me.

But don't get me wrong. I'm still a runner so I will have to convince myself to either target a sub-2:00 half mary or run another full later this year (probably the RunRio one in October).

For now, the plan is to run another duathlon. But based on the race calendar it seems that I will have to wait until June.

I first tried them out in this morning's brick workout (bike-run). Actually, it's my final workout before this Sunday's duathlon. I enjoyed it so much that I can't wait to use 'em ---in the race. 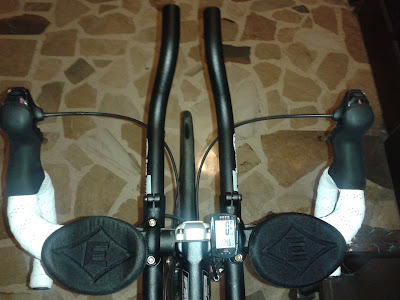 In the words of @runblogger, it was like my family was attacked.

My prayers go out to all those affected by this terrible tragedy.
Posted by daytripper1021 at Tuesday, April 16, 2013 No comments:

I ran 7k yesterday without a Garmin. For a tech geek like me, it was renewing to just run without that beep sound telling me my pace. I didn't know my time by the run's end, but I think that my pace was somewhere between moderate and hard effort.

Weird, but I felt great running by feel.


Reading this RW post has now tempted me to run marathon #5 in July without a Garmin or watch.

I was able to do better last week, with the Duaman distance simulation completed nicely last Saturday (3k run, 20k bike, 3k run). I lost pace on the 2nd run leg, probably due to a combination of having run 10k (at marathon pace) the previous day and wasn't able to replenish my calories during the bike leg (forgot to bring my energy bar). Yup, I definitely learned something that day.

I'm headed for a good start this week as I ran 10x400m this morning (Monday). Hopefully I've gotten my running mojo back in time for the start of marathon training next week.