In the course of a year and 3 months, I have managed to upgrade my road bike part by part:

The overall cost of the bike, less the money earned from selling the "old" parts, could be almost twice the price I bought for the bike when I first got it. The itch, a.k.a. upgraditis, is so much to blame. Interestingly, upgraditis appears in the urban dictionary (see Urban Dictionary: upgraditis).


It's addictive really, especially for someone as OC as me. I would look at my bike for 5-10 minutes and almost every time I would think that it'll look/perform better if this part or that part is upgraded. Once I get that part replaced, then I would see another part of the bike to upgrade, sometimes just for cosmetic reasons. Thus, an endless cycle ensues.

The peak of my upgraditis may have been late last month, after I got the company bonus. With the money I got, I thought that it was time to either upgrade the bike frame or buy a tri bike for my duathlons. Both options were pricey, right up there in the "how can I spend this much money?!" range. Should I take the tri bike route, I will get it with stock parts and that'll lead to another round of upgrades again. That'll mean more money coming out of my pocket.

I decided to wait and wait further until the itch subsided, and opted to look into getting a coach. I thought that I should upgrade myself first, bike second. A new frame or tri bike will have no effect if the way I train/race remains the same. I feel that this 40-yr old body still has much left in the endurance/speed tank and I just need someone, a coach, to tell me how to do it properly.

In my first meet up with my coach, I asked him if I should get a tri bike. I thought that if he says yes, then that's a good enough reason for me to buy one (and thus scratching my itch to ugprade). He paused for a few seconds and said NO. What he said was like an antibiotic that virtually erased my upgraditis. He simply said that I should just train hard and make it a motivation to beat those in good looking aero/tri bikes during races.

It was like I was doused with cold water. True, I would often get dropped by older looking bikes, just like that 64-yr old cyclist that I encountered in the Valle Verde Loop. His bike could've been used during Eddie Mercxx's or Greg Lemond's hey days, when carbon, Di2, or even aero was still something that was never thought of. The last time I rode along side him (or tried to ride alongside him), he wasn't able to set up his gearing so he rode in one gear combination. He was pacing at probably 110+ cadence as he flew ahead of me...with his old looking bike....again.

I'm not saying that I won't upgrade ever. But I would like to "earn" that next upgrade, be it just a bar tape, my next pair of pedals, or that N+1 "requirement" of having a second/tri bike. Hopefully what I've just started will take me there: an upgrade that I truly deserve to get, not just because I want to.

Overall condition getting better last week as I reduced the rest days to 2. The week started off well with a good tempo run (4k in between warmup and cooldown) on Tuesday, then followed by the maiden ride of the indoor trainer that I bought second hand on Thursday. My body will be tested fully by it this week, as the program requires 2 indoor workouts featuring Sufferfest videos that I need to follow.

Last weekend was getting my baseline ride and run TT performance which I hope to improve on monthly. The program is slowly coming into bloom now, with this week having only one rest day.

Hopefully all the waking up early despite the biting cold will be worth it by the time racing season begins.

With the Unilab and Natl Dua races not yet in the list, an exciting racing season awaits!
Posted by daytripper1021 at Monday, January 27, 2014 No comments:

Too many rest days last week. I'll probably back out from the company football team as it is disrupting my morning run/bike workouts. Further, I need to wake up earlier than usual since I'll be working in our Makati office most of the time as this requires an additional 30mins driving time.

That Maf run last Sunday felt good, as average pace improved to 7:32/km. Recorded my 3rd best time in the ULTRA hill on that Saturday ride so things are getting better, albeit slowly, in the cycling department.

I have added TrainingPeaks.com in my daily logging as this is a requirement of my coach.

Yes, I hired a coach last Sunday to help improve my race times. I expect training volume to increase by next month, i.e. from 4-5 hrs a week to a daunting 10-12hrs a week(!). Hopefully I'm up for it. He says we'll build on my cycling volume/strength for the first 2 months, targeting to probably complete my first century ride before the 1st half of 2014 ends (!). By the time the SCTEX Dua and Nat'l Dua C'ships arrive, I hope to be in my best racing shape ever. The key, according to coach, is to follow the program that he'll provide. The company football club tryouts started last week so no quality run/bike workouts last week (except for the long ride). I wanted to be in the team but I also wanted out as I hoped to concentrate on duathlons. The muscle pains that I experienced the morning after the football practices showed that this 40-yr old body may not be suitable for contact sports anymore. Although I passed the tryout's 1st cut, there will be another one in several weeks. I'll probably get cut off by then anyway so I'll just enjoy the crossfit-like training that I'm getting every Tues and Thurs evenings.

Of note last week would be last Sunday's Maffetone run wherein average pace improved from 8:19/km the previous week to 7:40/km. Average HR (134) was somewhat the same so this was a good result in terms of aerobic improvement.

This week will be interesting as I might hire a coach to improve my run/bike pace. Yup, after several years of being self-coached, I may surrender to hiring someone to get a better look at how I train. Self-coaching is good but it could get you only up to a certain level that only you see. It may be better to get an extra pair of eyes to check if what I'm doing is right. I'll meet up with him this Thurs evening so let's see how that turns out. 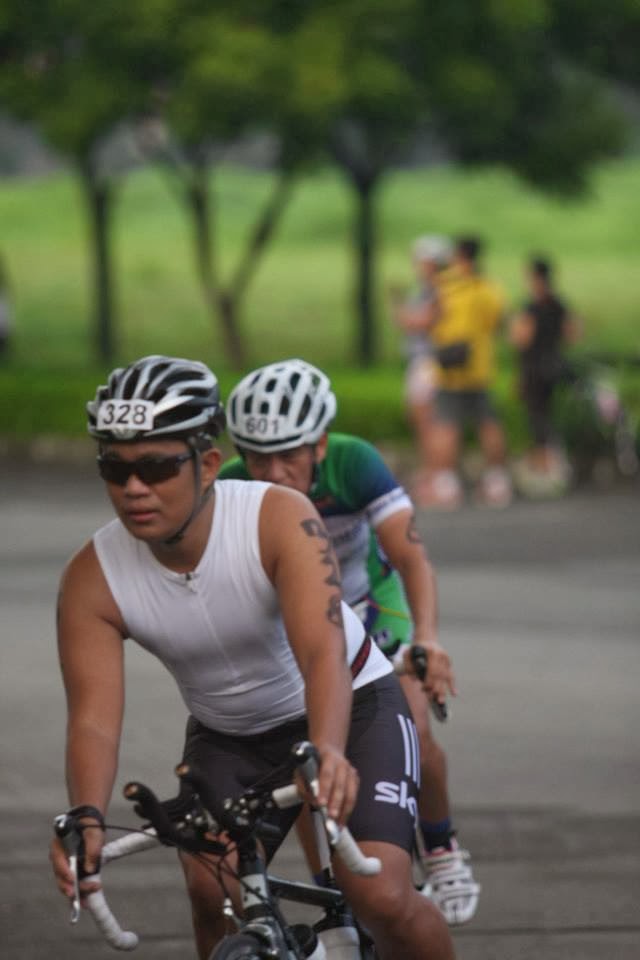 Mon and Tues were rest days as I was in KL at the time vacationing with the family. By Wed morning in Manila, I was back into training mode kicking things off with a bike-run brick. What a way to start the year ey? Good to note that I was able to focus on the run, refusing to walk on that final km climb. The pain threshold needs to be extended further in order to get better pace results.

Bringing back my Maffetone runs now as seen in the 8k run last Friday. Just need to trust the HRM and keep the HR below 140 as recommended by Maffetone. The 8:19/km average pace for that run showed how I lack aerobic fitness. More Maffetone runs needed for this Duadaddy.

Saturday morning was a long ride from Home to Valle Verde loop, my new playground. Just loved how that 2km+ loop is long and continuous with a handful of riders trying to keep up with the peloton. Met a 64 yr old cyclist as I rode and got good tips from the aged warrior who can still make good pace (and outride me!) just before I decided to cap the ride with one climb at that dreaded ULTRA hill. Now THAT'S a hill!

I ended the week with a long tempo in BGC last Sunday. As I would always do a long slow run in BGC in the past, it was good to shift pace as I set off that workout. Pace was wanting by the end so a lot needs to be improved there as well.

Need to cutoff on the food binging as my weight is REALLY way way up from my record of 155lbs from 2012. Calorie counting should be back in the program this week.

The morning of January 1, 2014 was similar to previous years. The air was still filled with firecracker smoke/residue from the evening revelry. It was a bit chilly and it was quiet with cars on a street you can only count with fingers in one hand.

In the midst of the quiet, smoky background, there I was huffing and puffing on the last kilometer of my first workout for 2014. It was a bike-run brick. Already done with a 31km ride around the metro, I was fighting the urge to stop 3/4 way at that 5km run. It wasn't race pace as I was just a tad below 7:00/km. That 5km is on my regular route, with the last km a continuous long climb to the finish.

The temptation to stop was all too familiar. It's alright to walk since there'll be more workouts coming, I said to myself. But then I recalled how I slowed to a walk in my last duathlon in Subic, succumbing to a slow 38mins on that 5km run2. This thought changed the plan to drop this morning's run.

I became determined to finish the 5k run without walking. I concentrated on my breathing, inhaling as much oxygen from the mouth and exhaling thru my nose while I kept my stride in check, however slow my pace was (6:55/km).

At the end of 34+ minutes, the 5k run of the brick ended. It wasn't a PR obviously, but what I took from that workout is that I STILL have the will to fight off walking if I set my mind to it.

Build a solid base.

Don't register for races unless you're absolutely ready.

And, lastly, race like my life dependent on it.