RunRio3 32k was right smack in the middle of my training for Feb 2011's Condura 42k. Thus, it was only fitting for me to sign-up and see how effective (or not) the mileage build-up and addition of new workouts (200-400m intervals, stricter adherence to long runs) from last August to present is helping.

The plan was to stick to 7:00/km as close as possible ---my target full-marathon pace--- throughout the race. I managed to be slightly ahead of said pace at the 10k (1:08) and 21km mark (2:24). I was feeling good at this point, stopping at almost all the water stations and eating a pack of GU gel every hour. I was attentive to sensing my form as well, adjusting in time to stop that left knee from acting up (you really gottta try midfoot running, it works!).

And then, after grimacing through that final incline just moments after leaving the Heritage Park turnaround, it came.

On the upside, the persistent training (long runs, in particular) that I've been doing had managed to push the WALL from km16 (experienced during my full-mary debut in Milo last July) to km25. I GOT to be happy with that. From hereon, I need to continue on religiously doing my weekly long run to hopefully push the wall further before Feb6.

Congrats again to RunRio for conducting a well-organized race! You guys rock!!! 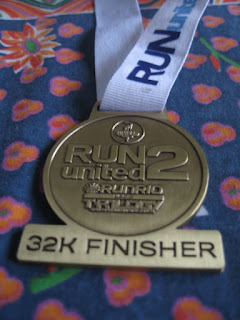