Company Sportsfest Closing Ceremonies
15k, The Fort
I did the same race earlier this year, finishing 1:37:20 (PR since it was my 1st 15k). I hope to do better this Saturday, with Goal A at 1:30 and Goal B at 1:35. Aside from that, this race will serve as my checkpoint on how effective my current training is, which by the way, I have cooked up personally by including easy runs, long runs, tempo runs, and lately, intervals.
Should my race performance here be below par, I will try to look at it positively by going back to the drawing board and adjusting my training.

Unilab RunRio3
32k, The Fort
I have never done Rio's "The Afro-Man distance" before. I hope to finish well here since this will determine the course of my training for Condura 42k 2011. Again, adjustments to my training would have to be made if this race falls below my expectation.

QCIM 2
21k, QC Circle
I did 10k in the 1st edition of QCIM, finishing at 1:04 which stood quite long before I broke it to 1:00:57 in Mizuno earlier this year. I'm stepping it up a notch by hoping to conquer the 21k event. This'll be just right since long runs will be required.

Milo Finals
21k, Manila
This will hold a special meaning for me since I'll be tackling the distance the late Remus Fuentes succumbed to last July. I'll treat this one as a special tribute to Remus since I discovered we had many in common. We were both the same age, we each had a loving wife and 2 children, and we love the sport of running. I will probably stop at km19.9 and say a short prayer for the repose of his soul during this race (I hope you do so too!).

Condura 2011
42k, Skyway
As early as now I'm announcing my plan to race my second full marathon in Condura, the race that started it all for me. 5:53 is the time to beat. I hope all the training and above races will condition me well into meeting a sub-5 finish (Goal A), or a 5:30 finish (Goal B), or simply, to finish (Goal C). 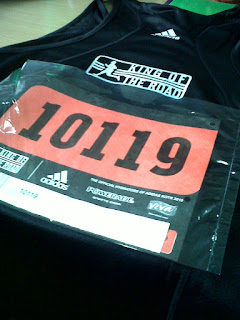 Click here to get race info on registration and maps.

What is a Finishing Kick?

In case you don't know what these terms mean, check out Nick Symmonds in this outstanding 800m USA Olympic Trial finals last 2008.

Btw, he did the same this year.

Makes you wanna go out and do speedwork, right?

As a gift to myself for finishing my first full marathon, a week after July 4 I bought a pair of the much talked about Newton Distancia Racers for P7,000.00 (approx. USD 159.00). I was sold to buying such an expensive shoe (average running shoes costs around P3,500-5,000.00) since I've made it my mission to adapt to midfoot/barefoot running after reading Born To Run and Chi Running.

I was also sold to the numerous articles/books I've read that changing from heel-striking to midfoot-striking could make my runs injury-free, particularly on my left knee. Much of the "blame" would also be on my running buddy and triathlete/officemate @paopedal who swears by the product's technology.

In RUNNR BHS, I was able to test it on the store's treadmill. It was good to know that my barefoot running tests showed that I've improved my gait to near-midfoot after my first try at RUNNR almost a year ago. With the Newtons, the storeguy said that it seemed that I've easily adapted to the shoe compared to most first-time wearers.

Needless to say, I've considered all angles before I bought the shoe.

On my first run (1km), the shoe felt very light (244 grams) compared to others I wore previously (my Adidas tResponse Stability weighed 360 grams while the Asics Gel Foundation 8 I'm still using weighs at a hefty 390 grams!). Newton recommends to just double the distance-increase during break-in period but I overdid the 2nd run (3-4km). I ended up with extremely painful calves for the next few days.

After the soreness of my calves had healed, I must say that the next runs with the Newtons were really great. The patented lugs were forcibly correcting me to strike midfoot. It also made me conscious of preventing heel strike although the soles of the shoe indicate that I still heel-strike a little on my right foot.

I've logged about 90-100km already with this pair. Aside from using it for my tempos (5-8kms), a few short easy days, a couple of long runs (14km last Sunday) and a speedwork session last Saturday (10x200m), I've used the Newtons for two 5k races as well: Rexona Run and St. Lukes QC. In both races I finished sub-30 (although the latter, St. Lukes QC, was short of 800m), which is a marked improvement, probably due as well to the continous training/running since my last 5k race (April, or was it May 2009?).

THE PAIN (OF ALTERNATING SHOES?)
The previous pain on my left knee is slowly degressing since I started running with the Newtons. So whatever pain I have there now was brought about by the remnants of previously running heel-strike. So there's definitely a marked improvement with the change of running gait that the Newton is forcing me to do.
The problem with the Newtons is that when I heel strike (when fatigue sets in on long distances), there is no support to cradle your fall at the heel since the design is primarily for midfoot strike. The result is pain on my left heel. You really have to be conscious to midfoot-strike all the time with this shoe or else it will let your heel suffer.
Further, I think that when I switch between the Newtons and my Asics (which are of the motion-control class, i.e. heavy) the heel-support that the latter provided made me relax a bit on midfoot-strike, thus triggering heel strike. And pain.

SUMMARY
The Newton Distancia Racer is a good buy since it teaches you midfoot strike ---a definite way to reduce injuries. It is very light that makes running smooth and effortless. It needs a couple of break-in runs before you get the feel of midfoot strike. Rushing it will cause you calf tenderness (i.e. pain!). You just need to be conscious of your gait all the time since if you heel-strike, there is not much support on the shoe to absorb the impact from the ground to the heel.
I will continue to use this shoe for training (speedwork, tempo, and short-easy runs) and racing (5k for sure, 10k probably, but currently in doubt if I'll wear them for 15k up to a full marathon). Maybe if I get more used to midfoot-strike, I'll be more confident to wear them for longer race distances.
Posted by daytripper1021 at Monday, September 13, 2010 4 comments:

Missed Coffee, but went to a Hospital

The bedside clock displayed 5:35am as I woke up Saturday morning.

Ugh! I woke up late!

The previous night's race preparations for Saturday's Figaro 10k went all for naught as I overslept, due to the long drive from QC to Nasugbu and back to attend the wake of my officemate's Dad there. I had no driver-reliever so I drove 3hrs to Nasugbu, then 5 hours back (because of the traffic and stopovers).

It might've been good as well since my body was obviously not conditioned to race that Saturday. Still dead tired and groggy, I went back to sleep.

I found out later in the day thru my batchmate that the 5km loop of the race only measured 4.44km according to his miCoach. Tsk tsk...

***
Thanks to takbo.ph's List of Races, I was able to find a race for the next day: The St. Luke's Hospital QC Urology Alumni 3k/5k for P300.00. Knowing the pros and cons of a cheap reg-fee, I still decided to sign up since these legs were aching to race (my last race was the Aug.1 Rexona Run 5k). A sub-30 5k dream must be achieved. Further, this race was just a 5-minute drive from home so even if I wake up at 5:35am, I can still make it to the the 6:10am gun-time.

Sunday morning I was relaxed as I arrived in St. Luke's QC. I felt that sub-30 was imminent, despite being awestruck by the presence of the mighty Kenyans warming up (yes, even for a small race such as this, they were THERE!).

The attendance was around less than 300 combined for the 3k and 5k runners. The gun went off a few minutes late, but that was ok.

By the middle of the 2nd kilometer I felt that sub-30 was going to be impossible at this point due to two reasons. One, the race course was laid with calf-killers: hills. It was like Botak Baguio without the cool breeze and elevation. I started with 5:30 on km1 and succumbed to 6:20 by km4. Hill-training is still my achilles' heel (hehe).

The second reason was that the race distance, similar to Figaro Run the day before, was short. My 305 measured it at a measly 4.21km. Despite my finish time of 25:33, the 6:05/km average pace made me conclude that even if the race was exactly 5km, I won't be able to reach sub-30.

Yup, I'll have to make hill-training mandatory in my training from here on in.

***
So what's up with these two races (Figaro and St. Lukes) and their route-distances (4.44km and 4.21km), right? I feel that it's an essential part of each race that the distance should be damn accurate. Be it a P550.00 or P300.00 registration fee, the distance MUST be accurate.

Am I right or am I right?

So please do better next time and, for my part, I will do better with the hills, too.