Happy...but not until August 7th

Glad to have stumbled upon this on FB this evening:

Needless to say that I'll be stalking the Bike King website like a hawk come August 7th, 12NN!

Imagine my disappointment when I tried registering for the Unilab Duathlon last week. The website, like any bad news, was straight to the point: 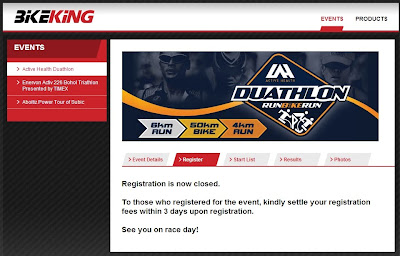 I heard that the registration for this sold like pancakes that it closed within a day or so. I guess duathlons are the in thing now, especially for non-swimmers like me.

I read in the swimbikerun.ph forums that they *might* reopen registration since some have either duplicated their online entries or some haven't paid after the 3-day cutoff. Hopefully I'll be able to register if that happens.

Barely a week after my last duathlon (which btw the organizers have YET to release the full race results, ATTN: Adrenaline Race Org), I was able to find this announcement on the Unilab Active Health website linked from the swimbikerun.ph forum pages:

I was surprised with the 50km bike since I initially thought it was going to be 40k only. The longest that I rode in a duathlon was 40k from my first dua last Nov 2012.

But there's always a first time for everything: a 50k bike in a dua AND possibly riding along the SCTEX!!!

My target for this race was to finish below 2:10, just in time to drive back to the house for the usual family Sunday breakfast at Pancake House at McKinley Hill. That would mean finishing before 8:10am (if the race started 6am), with probably 56mins total run time, another 55mins on the bike, and 9mins transition buffer for T1 and T2 (worse case).

There was some confusion among the male runners when the starting gun was fired, since the announcement said that we'll be released in waves according to age group. It turns out that there was going to be only TWO wave starts: the first one for elites plus males aged up to 44, then the second wave for the female and the rest of the men.

Anyhow, seeing all the guys running made me start my race as well. :-)

I saw my pace hitting 5:30/km in the first 500m so I drew myself back, letting it settle to just a tad below 6:00/km as I was anticipating a dreaded climb at the Palms area. True enough, I passed it ---twice since we had to do two loops. By the 5th km I was excited to get onto the bike leg but I still had about 10mins to go before transition. I got myself ready by taking my only Hammer Gel for the race as I neared T1.

The bike course was about 70% flat and 30% hills which made me happy about my decision to keep my aerobars clamped in. As there were a lot of participants in this race, you really had to be conscious when overtaking AND when being overtaken. The turns are pretty tight, especially on that one turn with a muddy section wherein unfortunately I read in the SBR.ph forums that one participant crashed. Hope he's ok.

I managed to get my speed up here, surprisingly enjoyed it as I took the flats with impunity, seeing >30kph at times on my Cateye. The Cateye proved helpful in monitoring my number of loops (we had to do 6) so I never lost count since I just needed to look at the distance on the screen. It was probably short of 1km but I think I did well, finishing at 27.5kmh average pace as per the Cateye. It was +1kmh faster than my first duathlon in Subic last Nov 2012 so I was really happy with the improvement going into T2.

I entered the dismount area with my cleats disengaged (surprised that I'm able to pull my cleats off while on the bike even with a bulging belly, hehehe). I found myself a little tired as I walked to my station to park my bike and was slow to put back my running shoes. Good thing I installed my Lock Laces for this race to save on time.

It was going to be another loop before hitting the finish. My leg turnover was good coming off from the bike but pace was slow (6:15) than planned (sub 6:00). I tried to get in some more pace but I was probably too tired from the bike that I couldn't dial in my target pace. I just told myself to maintain 6:15 current pace and not slow down.

But there was the Palms climb again. It was difficult to get the pace better to 6:00 so I had to content myself with 6:15. I was actually getting slower, reaching up to 6:25 in the last turn to the finish. I sprinted the last 100m, telling myself, "last na 'to!!!" so I had to give my all. 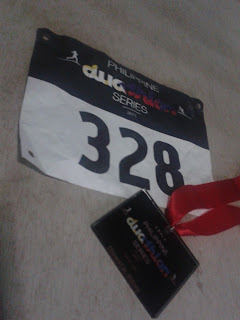 I think I should've taken another gel about 5km before T2. It could've been a game changer going into Run2, instead of me believing all my stored fat would carry me in 6:00 pace in those last 3km of running. That's something that I may need to practice later on.

Or, I may have to slow down(?) a bit on the bike to leave some energy for Run2. Btw, as it is only my 3rd duathlon I need to practice on road etiquette while biking, i.e. staying on the right and ONLY moving to the left when passing.

Bringing Back my Running Mojo

I'm happy to update that my running mileage has been increasing, albeit slowly, over the past 3 months.

My tempo and interval runs have been injected back, though not as heavy as when I was training for Marathon #4 last July 2012, but I'll take it. If it's a tempo run scheduled this week, it's intervals the next. I've also introduced regular easy runs without a Garmin nor watch, which puts no pressure on my run which I most often look forward to.

I still have a lot to go in terms of long runs. My longest so far this year has been a 14km last March. I'm slowly getting there as I ran 13k last Sunday (from an originally planned 10) and felt that I could do more.

Of course, I still have my 2-3 times a week of biking, with Saturdays at either MOA or Camp Aguinaldo between 30-40km per ride.

I'm racing again this Sunday. It's a 6k-30k-3k event. I think I did better this time in terms of training compared to my last duathlon (Duaman @ Nuvali) so I hope to do better here pace wise. The bike course is a rolling one so I'm still undecided if I'll remove the aerobars from my bike. T2 will be faster I think since the Lock Laces that I bought and tested will save a lot of time as I transition from bike to run2.

I hope I learned my lesson from my last race when I woke up late. Registration fee is P1,400.00 so I BETTER wake up in time! Hahaha...