The year 2012 has been very kind to me as I was able to break several PRs:

The one that I'm most proud of is the FM (42.195km) PR wherein I chopped off 12 minutes, proof that when you do the work (16 weeks of smart training), you are rewarded handsomely. 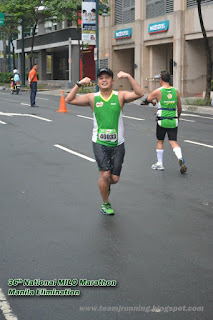 2012 will be known for me as the year I started cross-training: spinning and strength-training. These tools that were made available to me by signing up in a gym has helped greatly in injury prevention and overall race performance. That is, activating those muscles that I never use before has now helped me perform better in my runs, especially during the last part of the run/race where stronger muscles keep my form intact to be able to dig in for more.

Except for the last 4 days of food binging in Singapore, 2012 has allowed me to lose 10lbs which I previously wasn't able to do since losing my first 10lbs last 2009. Calorie counting helped via myfitnesspal as I held on to keeping myself below 1,400 calories (as much as possible when without exercise) to lose the unwanted weight. The 10lbs that I lost was also a reason for me to break PRs this year.

2012 marks the year that I started cycling and joined a duathlon standard distance. The ASTC Duathlon that I joined last November has thought me a lot, that I have a lot to improve on especially on the bike ---a new sport that I have come to love and crave for in the mornings.

I hope to continue this upward 2012 trend in 2013. As I mentioned a few posts ago, I will aim for a new 21km PR. I would like to join more duathlons. I would like to lose another 10lbs. And, of course, the unfinished business of aiming for a sub-5 full marathon is still there.

I hope you, my (few) readers, have enjoyed my blogging this year. I hope to continue to share with you my running and duathlon experience in 2013. I don't mind if you spread the word out about my blog btw. ;-)

No rest even in Singapore

The family and I will be heading off to Singapore for a well-deserved vacation starting tomorrow until Sunday. In case you're wondering, I used to work there from 2001-2002 on a brief contract stint. So, yup, I really miss the place (and the food!!!) so going there will bring back lots of memories working as an expat.

As this blogpost says, I hope to have some workouts there especially now that I've confirmed that the hotel that we're staying in has a gym complete with cardio and strength training equipment. Thank God!

I hope to run around the city as well at dawn. See if my lungs are capable to withstand the humidity that Singapore is known for especially during the Standard Chartered marathon.

At least I'm still able to burn some calories after my tastebuds revisit the delicious chicken rice, satay, hofun, teh ais, teh tarik ais, etc. etc.

I guess I'm qualified as a triathlete:

When you love running in a particular shoe, you worry if the succeeding versions of the shoe will live up to the performance of its predecessor. Tinkering too much or too little might make the upgraded version a downgrade in effect, similar to how movie sequels failed in beating box-office expectations of the previous film. But then, there are rare movie sequels that satisfy the audience thinking that the sequel is oh so much better than the first one.

The K-Swiss K-Ruuz 1.5 racing flat is such a sequel.

After 409 kms on my K-Ruuz 1.0, it was time for me to buy a new racing flat. The upper, in particular where the pinky toe resides, have worn out due to the numerous runs and races that this pair has joined in.

Fortunately, during the Tripalooza at the Piazza Mall in McKinley months ago, I was able to acquire at a very good discount the K-Ruuz 1.5 version.

The 1.5 sports a fiery red and yellow look and, compared to its 1.0 predecessor's 9mm heel to toe lift, this one has a 10mm lift as per the runningwarehouse.com web site. The 1.0mm difference is very unnoticeable, unless you're the Princess of the Pea.

Once you get out for a run in this shoe, the noticeable difference between the 1.0 and this one is the more comfortable feel of the improved upper. The outsole markings remain the same so you'll still have the small stones getting into the drainage holes from time to time which was the same experience for the 1.0.

Still, the lightness of this shoe (at 6.0 oz) makes you run fast with quick turnover due to its lightness, as expected in every racing flat such as this.

I have a small issue though on the sock liners since the drainage holes in it are a little bigger compared to the 1.0 version. The result of which, during and after a sockless run, is some mild pain under the foot since the   holes have marked heavily there. I was able to fix this by swapping the 1.5 sockliner with the 1.0's so my sockless runs have been comfortable since then.

After 146 kms so far, this shoe has helped me this year in my tempo and speedwork training runs which has resulted in improved performances in my 10k, 21k races and in last November's maiden duathlon (where I saw that it was being worn by about 3 out of every 10 duathletes there).

Definitely, this is a serious racing flat for serious runners that want to achieve PRs.

Of course, I'm hoping that the next installment (the 2.0?) will live up to the hype to complete the K-Swiss K-Ruuz (successful) trilogy.

It's been 3 days since my last workout (a 5km run). Quite odd for me to be idle for 3 days. The reason is that I caught the flu and I've been nursing it since early this week through a barrage of medicines and drinking lots of liquids.


I think my body is complaining since I've been working out 6 times a week for the last couple of weeks. Coupled with little sleep, night parties and weekend family duties, I guess my body has reached its limit.

So here I am recovering with a water bottle on one hand and a medicine bag in another. Hopefully I get better later this week to get the miles moving.

Saved by "Nasu: Summer of Andalusia"

"Come in your best Anime costume!"

That was the invitation I received about 2-3 weeks ago for a Thanksgiving party to be held at our boss' residence in time for the Holidays.

Fast-forward to 24 hours before tonight's party, the only "costume" I could manage was a Naruto T-shirt which I hope could suffice. But a colleague said most of the attendees to the annual costume party go "all out" with the theme. For example, the 2011 edition required everyone to be in a Greek costume so a lot of 'em wore branches on their heads and robes. Quite stupid-looking, I know, but pakikisama dictates that you play the part.

In panic, this morning I prayed, nay, implored that Google would reply for a positive result for my "cycling anime" search. Wearing my cycling outfit would be my last resort in getting a full costume since the Naruto wig supplier at sulit.com.ph had no stock of the yellow spiky hairdo.

"Nasu: Summer of Andalusia" is a 2003 Japanese anime film (about less than 50mins long) according to Wikipedia.

An anime costume without spending a single cent.

I thought about renaming my blog since (1) my running passion is now shared with cycling, my new found (rediscovered) joy, (2) "DuaDaddy" is more applicable for me, a father and endurance freak, and (3) "DuaDaddy" has a better name recall, hehe.

The URL will remain the same but the title and content will now focus on not only my running but on my (would be) duathlon/cycling exploits as well. 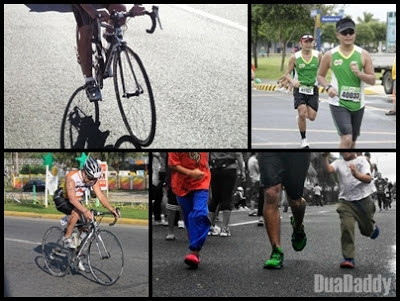 Now go back to training.
Posted by daytripper1021 at Wednesday, December 05, 2012 No comments:

I think it's time to set another goal PR. The 42k PR I achieved last July (5:11) was the result of weeks and weeks of hard and long training. I may have not reached my sub-5 main goal, but running that race with a mission and at the same time with confidence that I CAN run at my target pace without worrying of bonking (heavily) was a delight to play back in my head over and over again.

I have to say that it was really those 16 weeks of training seriously that made me ready for race day.

After watching the video below this morning, I may have been inspired again to start training seriously for a race.

As I have not improved on that PR for 2 years since, I believe it's high time for me to get the training cycle rolling again to beat that time. That would mean digging deeper into a race pace that is much faster and possibly, more painful than that last one.

No pain, no gain.