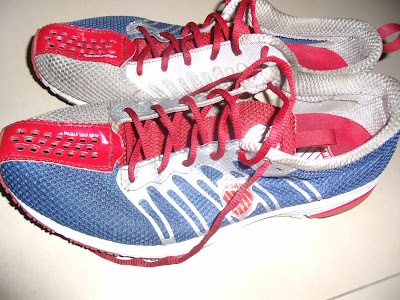 I'm posting pics of my ever reliable K-Ruuz 1.0. I bought this earlier this year and, after 377 kilometers or roughly 235 miles, it has served (and continous to serve!) me well. 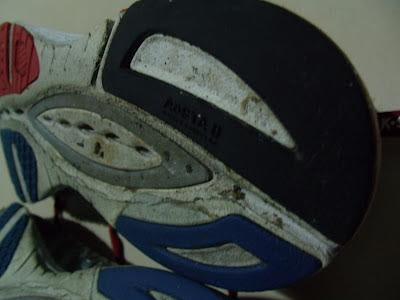 This racing flat is very light.  It encourages you for a quick leg turnover, thus I've used it mostly for my speedwork/tempo training days and also for all my 21k and lower distance races this year. It is very responsive especially when you wear it sockless.

The only thing that I don't like about it is that tiny particles can still pass through the water holes from the outsole to the inside of the foot. This is very irritating as that teeny tiny pebble(?) less than a millimeter thick irritates my feet with every step. Thus there's no choice but to slow down, step aside, untie the laces, and remove the shoe so that the particle can be expelled. I saw that the 1.5 version of this shoe still has the same vents so probably there will still be the same irritating experience (especially in races!).

﻿ ﻿ ﻿
Overall, the shoe is a great racing flat great for those days when you just have to rub that itch for speed. It's light and the upper is well ventilated. The holes on the outsole and socklining should be addressed to block small particles from reaching the foot.

As I have not met my main goal of finishing sub-5hours in last month's Milo Marathon, I need to find out where I need to improve. Of course, there is also the need to give credit on where I did well which led me to finish the race with a 12 minute PR (5:11 chip time). Get the good and throw out the bad as they'd say.

A STRUCTURED PROGRAM. The 16-week program I used was a mix of the tempo and speedwork of the FIRST Train Less, Run Faster program combined with the Sat/Sun runs from the Brooks-Hanson program. I was able to put in more quality workouts (1 tempo, long run, and speedwork per week) instead of just putting in the miles per week. It's better to have a program to follow instead of having no training plan at all ---especially for a big race such as a 42k.

MORE MILES PER WEEK. Hands-down, personally, having more miles per week will lead to a better performance on race day. I can easily conclude this based on the performance of my last 3 marathons, particularly the average km per week from week 1 to 15:

If I can increase my weekly target to 50km for my next marathon plan, then it could help me get closer to my sub5 goal.

LESS WEIGHT = FASTER. At the start of the year I have been calorie counting in order to lose weight. I was able to shed 10lbs. Obviously, less weight to carry for 42km would mean better performance on race day as I've experienced. As I've gained 5lbs due to the lull of resting for the past 2 weeks, it's high time for me to get back into running mode again to lose the unwanted weight!

CUSHIONING. For Condura2011 and QCIM2011, I used racing flats for my 42km race (Adizero Adios and Brooks Green Silence, respectively). This has not helped in the latter kilometers after 21k since my feet would start to get fatigued and painful beyond that point. My body weight and the impact that it does to my foot is not (yet) ready to just wear racing flats for 5 or so hours. For Milo2012, I still used a low heel-to-toe ratio minimalist shoe but with a little more cushioning (the Brooks Pureflow). This really helped in getting me through (between km21-33 in particular) as I was still running comfortably at this point.


WHAT NEEDS TO BE IMPROVED (FOR A SUB5)

INCREASE AEROBIC CAPACITY. The problem with the FIRST training program is that only the key workouts (tempo, speedwork, and long) are in there. I believe there's still a need to pepper each week with easy/relax paced runs between 5-10k per run in order to keep my aerobic fitness in check ---preferably within Maffetone heart rate limits. I read somewhere that the marathon is 99% aerobic. I obviously experienced this during Milo2012, particularly from km33-42 when I probably depleted all my carb/glycogen reserves. With only fat as my energy resource and that I didn't train enough for these types of situations, I ran out of gas and succumbed to run-walking those last 10kms. I need to run more fat-burning paced workouts.

LOSE MORE WEIGHT. I raced Milo at 155lbs ---my lightest weight in years! I would probably need to lose some more, probably 150lbs by the time I race for marathon #5. 150lbs is good not only for my racing goals but for my health goals as well since that weight would put me right smack in the middle of the ideal BMI for my height. Hopefully, my cholesterol levels would follow suit. But first, I'm now at 159lbs so I better start running and calorie-counting again!

FASTER 21k RACES. The 3 half-marathons that I joined this year were all sub-2:20 ---a great personal improvement from past years. Still, that wasn't enough. Since I'm not yet ready for another 16 week training for my next marathon, I will concentrate on short term goals first by hopefully trimming my 21k times to sub-2:15 or hey, a sub-2:00. I can dream, right? :-)

I signed up for a Gold's gym membership which helps me get in small amounts of mileage whenever I can squeeze a workout during lunch time,whether using the treadmill or the stationary bike. It helps, especially now that it's been raining very often. I hope the weights/strength training that I'm doing will help me too.

My left knee still needs a lot of care so I'm trying to manage my run paces a bit, except for yesterday's 3x1km workout since I itched the NEED for speed. Probably the dumbell squats and patellar tendinitis exercises that I'm doing will help my knee get back on track.

Next race will probably be the annual company sportsfest next month. I signed up for the 10k event which I hope to finish below 60 minutes. It's been a while since I raced a 10k so it'll be interesting how I'll perform by then.

I'll be in Baguio on the last long weekend of August with my family.

I'm already excited to do a long run there ---with the hills, the challenging altitude, and the cold temps.

Yup, it's gonna be another HTFU run! 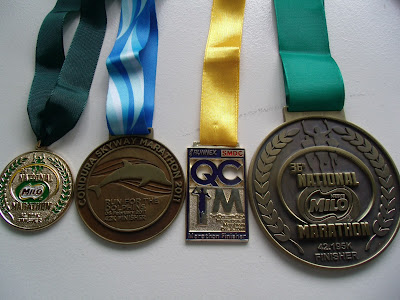 All four of my full marathon medals. Man, that 4.3-inch medal from last Sunday's race is huuuge! It represents all the hard work that I've done for the last 16 weeks prior to the race. This one will definitely have a special place in my planned medal picture frame (probably after a few more marathons, hehe...).

No wonder I heard stories of desperate runners cheating their way throughout the race route (making their own U-turns) or handing their racebibs (since the chip is attached) to a faster runner just to get a hand of one of these (oversized) babies.

Tsk tsk, whoever you guys (or gals) are, I hope you find it in your heart to dig a hole in the ground and bury yourself with that medal that you so shamelessly took by cheating. You have done a grave sacrilege on the Milo Marathon and the sport of running as a whole.

I bet Mang Felix can even overtake you in a 5k race any day.