If I knew earlier that this race would be organized by Rudy B, I would not have relaxed my walk from the house to the starting line. The sole yellow digital-clock placed on the starting arc with 11-minutes plus ticking (even though it was still around 15minutes before the published guntime) was undoubtedly telling me two obvious things:

I passed thru the hoard of 3k runners up to the starting arc, and pressed "Start" on my stopwatch. Late or not, I'm still going to gun for a sub-60.

The route was going to be a simple BHS-BuendiaFlyover-BuendiaAvenue out-and-back. I have done this route many times, but not at the crazy pace that I was planning to do for 10 kilometers: sub-6:00/km.

By the 5km turnaround my stopwatch showed 28:14. I was on target. The remainder of the course will be mostly inclines exclamated by the notorious Buendia Flyover. With my heart noticeably pounding and me breathing hard, I used my 1:46 buffer to take brief walk breaks (5-10secs) and hoping for the best. I was consciously egging myself, "RACE this. Don't jog. RACE PACE! Come on!"

I walked the Buendia Flyover for about 10 secs and just kept pushing myself to race on. I was able to catch up when I descended the flyover and turned right to Rizal Avenue, where the 1st half would be downhill. The second half all the way to 32nd avenue would be all uphill but with a slight grade. I was still in pace, but the 1:46 buffer had shrunk precariously to 1 minute.

I just needed to hold on a little more, I told myself. I glanced left and saw the finish arc waiting for me. As I made the two last turns, I was greeted by the welcome sight of the finish arc.

Just a little bit more. I was looking straight ahead but at the same time feeling the stop-button on my watch to get ready to stop the timer.

And then, as I crossed the line, there it was. 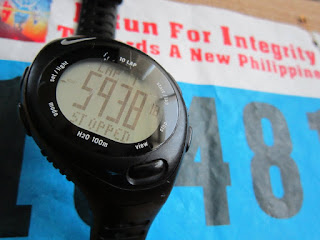 The most beautiful set of numbers that I ever saw that day.

How sweet it is.