Waking up Monday morning with an icebag on my back isn't my typical day-after-the-race condition. I've ran several half-marys and I was able to wake up the next day without so much pain. But the race I joined July 4th was entirely different for it was my time to tackle the full-marathon, a.k.a. the urban Everest.

I came to the starting line with 12 weeks of under-mileaged training (a "measly" 29k was my longest long run), an incompletely-healed left knee, and a slight stinging pain on my right forefoot.

Paolo, my triathlete-officemate who celebrated his birthday on the 4th of July (debuting in the full-mary as well), couldn't have prepared our mindset more clearly:

He was right. I was having palpitations around a week and a half prior to the race, an indication that I was worried sick of this new challenge.

I had slight thoughts on backing-out of Milo but when I recalled what Paolo said, it was definitely the right thing to do. Getting this (in the most sissy voice you could imagine) "Oooooh I don't know if I can finish 42k" thought out of my system was just something that I needed to do and yes, get it out of the way. "If you want to make God laugh, tell him your plans." ---Folk Proverb

I carbo-crammed the night before the race (Chinese food at Shaolin Tea House) and ordered McDo Spaghetti for take-out as my breakfast (which I barely finished that morning). Nutrition during the race would be served by 4 sachets of Hammer Gel (I tried GU the weekend prior but it seemed that GU doesn't like me). I was confident that there would be bananas and gels to be handed out on the race course so I didn't bring much food.

Probably due to my last RudyB race (21k Freedom Run) wherein one water station ran out of cups, I decided to bring along my Nathan 1.5 hydration belt. As luck would have it, this was a good decision (again).

I ran out of Body-Glide so I resorted to the cheaper alternative: Petroleum Jelly. I can safely attest that after the race, I'm a PJ-convert from hereon!

I was 3mins off-target by km10 (1:13). The pace just fell considerably after that. It could be a combination of the increasing pain on my right forefoot coupled with the panic that I might run out of energy in the latter kilometers, that I resorted to run-walk as early as km18. At the halfway mark, my 305 read 2:37 ---way way (way!) off the 2:27 target. Paolo was way ahead by that time, probably 3kms ahead.

Summer wanted to make a last hurrah that day as the sun was starting to rise ---with impunity. It was so hot that all was lacking was the sand, sea, and especially the sea breeze. I would refill my hydration bottles at the water stations to be used periodically to cool my face, neck, and arms from the searing heat while I sip a few ounces from the available cups.

At that point, I knew that I had to kiss my sub-5hour wish goodbye. To put things mildly, I was in survival-mode.

I will run/jog but only for about 200-300meters then walk as much as possible. The bananas handed out by the Milo van and by the takbo.ph aid station (thanks guys!) proved that bananas REALLY ARE ENERGY BOOSTERS.

With a little over 7kms to go, I was at Roxas Blvd going southbound for the last turnaround point. Boy, was it hot! Almost every 42k runner that I saw at that point was either walking or at a very slow jogging pace (special mention to Roselle, Jet, Jayson, JP, and yes, even Paolo, who I met at that point). To be honest, I didn't really get negative thoughts of DNF-ing this race. I was slow but my spirits were still high for the following reasons:

So for the next 7kms, I was mentally calculating my current pace to a predicted sub-6 finish time. As long as I kept my pace under 10:00 mpk (yes, I was THAT slow), I will have enough time to finish under 6hours.

It turned out to be the longest 7kms of my life. Every water station had packed up except for that volunteer aid station with the blue Coleman after one of the flyovers (thanks a lot guys!). There was even this water station wherein only a pitcher of ice cubes were left. I was so desperate for water that I squeezed in a few ice cubes into my hydration bottle and just shook and shook until the ice melted. Voila, ice water! :D

At 2kms left, I came upon this runner who mentioned that he usually finishes a 21k under 2hours but was unfortunately affected by cramps. He could hardly make a jog but I still encouraged him to go (even though I myself, couldn't believe that 2km was such a loooong way to go).

By the time I reached the corner of the US embassy and Quirino Grandstand, I still had a healthy 10mins before cutoff as per my 305. However, this race marshal told me and another runner that there were only 7mins left. With about 800meters(?) to go, I just decided to go for it and ran as fast as I could.

I was relieved that the timer above the race-vehicle was sync'ed with my 305. I looked around the area and found them: my (moral) support crew. I immediately went for Lucas, my 4yr old, and we ran the last 10 meters to the finish.

I escaped the cutoff time by the skin of my teeth. 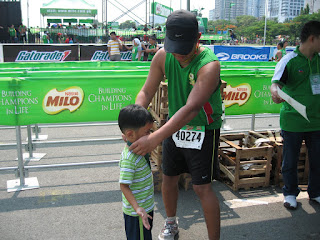 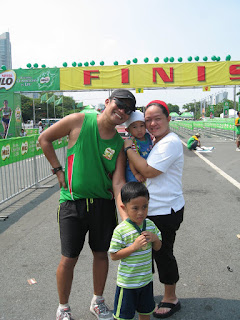 I'm still glad that I came out of this race alive. There are lessons to be learned, particularly in the training and race-pace strategy. Will I ever race 42k again? Yes, of course! But maybe not as often as I would do for a 10k/21k race. I've learned that training for the full-mary is very demanding. If you're body is not ready for the required weekly mileage, it is prudent that you beg off from joining a 42k race. I might keep my 42k races at a minimum, probably once a year. Doing it twice a year could be too much for me already. But we'll see....

But I have to admit, becoming a real marathoner has its benefits. My FB status of my marathon finish had more comments and likes compared to when I had my birthday. The comments, congrats that I'm getting here too at the office has somehow made me feel like a rockstar (there are only 4 of us in the entire 1,000+ employees who've finished a full mary).

Yup, I guess you can say that. 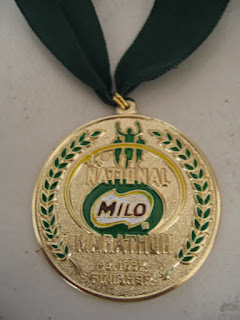