Recently, I've been inspired to take up a beginner's half-marathon program I downloaded from coolrunnings.com after I saw that a finisher's medal, not a shirt, is given to half-mary finishers in most races. For someone who didn't really excel in school or sports, I was still able to get my fair share of medals, among which:

2. bronze medal for technical excellence in high school (which was given to me AFTER graduation since the teachers realized they made a mistake in calculating my grades. sinabitan ako ng medalya in the principal's office with my dad as the lone witness)

3. a gold medal from my department's volleyball team last year (even though all I did was go there to cheer the team every game ---I didn't play volleyball)

I think those were the only medals that I could think of, all of which didn't really have a lasting impact since there was no real effort involved (especially #1 which I think should be given to my parents for working hard to get me through school).

It was in the Botak Paa-Tibayan last May when I was resting near the finish line after my 1st 10k race when I saw a 21k (or was it a 42k?) runner arriving at the finish, approached by one of the officials being donned a finisher's medal. Oh man, I think that whole part played super slow motion when I saw it. I could only imagine what that runner felt while he received the medal and as he was walking past the finisher's corral to be seen by the other runners who'd be envy of him, like me. All his training to finish 21k/42k paid off.

I gotta got me one of those.

But then that Botak medal moment played slow-motion on my mind again. Haaay....

So about two weeks ago nakahanap na ako ng half-mary beginner program that I think would suit me. This is my 2nd week into the 12-week program and so far I've been following it faithfully (ran a 5-mile "easy run" this morning). To be more faithful to it, I promised myself not to join any races until the 10k-race scheduled on week9 of the program.

But then I felt the itch to join a race (even though I just finished our company sportsfest last Sunday). Yup, such is the dilemma of an addicted runner.

I then scoured the Races section of takbo.ph yesterday when I remembered the Botak 5mile/10mile had been rescheduled to Aug 23. Then I thought, "Hmmm, merong 10-mile akong nakita sa isang Sunday ng half-mary program ko ah?!"

Then I checked the program and counted the weeks against my desk calendar..... 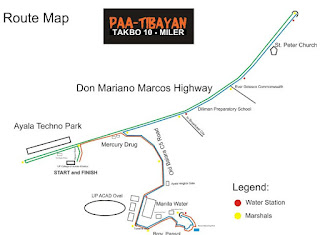 It's like the starts have connived! I hope I could still register for it though since the Aug23 race is a rescheduled date. Sana pwede pa.

But even if I don't get to run there, I'd still be following the program (which I hope works). The end of the 12-week program will not fall into any 21k race based on takbo.ph's race sked so I'll have to repeat the last 2-3 weeks of the program in time for the QC International Marathon. I hope there'll be a finisher's medal there. If there is, then wow.

That slow-motion medal moment that will play over and over in my head will include me as the runner.