The road from Nasugbu town proper to Punta Fuego Peninsula was all up and down as me and my officemates traveled for a kick-off seminar there. The running gang have agreed the previous day that running will be part of the agenda on Friday morning so I packed my running gear with my vacation ah este kick-off meeting clothes.

Friday, 5:45am. My phone alarm woke me up after a drunken stupor of red wine which our vendor generously provided (although most of us expected beer which came only after the wine bottles went empty). I walked up from my Casita to the road where BE, AQ, and DR were supposed to start. From my car's odometer the measurement from the Casita to the Punta Fuego entrance was roughly 2kms. So 1 loop would be 4kms. I was hoping to run the usual 10kms so if I felt that if I could still run after 8k, then I'll make 1 more loop. That'll be more than sufficient since it'll total 12k ---my longest since I've been hooked on running.

So we started off (without AQ who couldn't/wouldn't wake up) and I hit off at around 5:45-6:00/km as indicated by the Nokia Tracker which btw was placed in my newly-bought Case Logic armband that I bought at the Megamall branch at P503.00. If I won't like the fit or the running-experience, this'll be P503.00 down the drain, I thought.

By the turn-around point (2kms passed) we opted to take a new route heading back via the lower/upper beach house road. The word "incline" cannot do justice for this part of the run ---it was damn difficult! I think it was about 45 degrees incline when BE and I started attacking the incline...all the way. Believe me, the Buendia-Kalayaan flyover return-route to Fort was NOTHING compared to this 100-150meter killer incline along upper/lower beach road. I think it was the Kalayaan-Buendia flyover's dad, hehe.

After 1 loop (4kms), BE had enough. Hanggang 4kms na lang daw sya. The killer incline had drained both of our strengths that BE, who had not been running since July5, was done for the day. I was pacing at 7mins/km after I reached the top of upper/lower beach road. Sobrang ubos ang lakas talaga that the tought of finishing at 4kms as well passed my mind......

So I drank 3/4 of the water bottle that I took from the hotel room that I laid on the Casita welcome sign grass and headed off for another loop to face the upper/lower beach road incline. I was pacing at about 6:45-7:15/km when I started the 2nd loop. I was more cautious this time since the incline had earned my respect after loop 1. As I reached 6kms and started to attack the incline, thoughts were racing through my head:

"I should've been sleeping instead!"

At the end of the ascent, I was pacing at 10:00+mins/km. Sobrang drained na talaga that I wanted to walk the remaining 500meters of the loop. But still, I couldn't. Konti na lang, I thought. Just keep running and it'll be over soon.

As I reached the end of the 2nd loop, my Nokia Tracker stats showed:

Not a good performance in terms of pace/time. But I have to say that going through the killer incline TWICE could've equaled the effort I would take to run 10kms or probably more. Yup, I think I need to do more hill training. I'll try to put that in my half-marathon program next week.


The new armband went well btw. I'll most probably use it on my next runs.

My reward for this run? No finisher's shirt. No medal. No giveaway loot-bag. 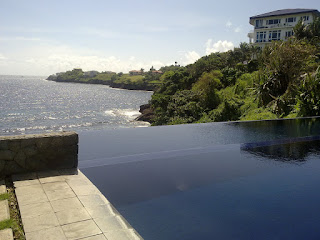