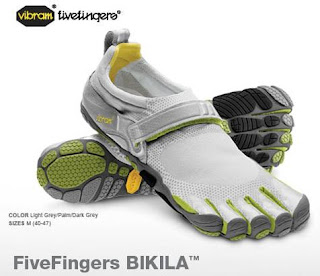 This was my reward shoe for finishing Condura 2011 42k. As a convert of natural (i.e. Newtons) and minimalist running (or shall I say near-minimalist since the true minimalist shoes have yet to arrive in full blast in Manila), I decided to go all the way, so to speak: barefoot running.

However, since my runs are on the road and you get to step on nasty stuff (like broken glass, nails, thumbtacks, dog poo, etc) I opted to get a pair of Vibrams to have at least some protection for my feet. As to the model to chose, it was a no-brainer that I should be getting the Bikila, specifically made for runners.

I started wearing them for short walks (yes, including malls so I'd often get that weird look when people see them). My kids had coined them as "gorilla feet" since they may have seen some similarities with the characters they see on Nickelodeon or Cartoon Network, hehe. I eventually started running on them 4 weeks ago. Below is a timeline of my runs with them:

Running with the Bikilas was quite a new experience. My feet were in close contact with the ground so every bit of road info was fed back instantly ---including lonely pebbles on the road (OUCH!!!). It was quite a lot of feedback so much so that when I woke up the next day after my March16 8km night run in Meralco, there was pain on my right foot (highly recognized when I try to move it in a overpronating motion). It may have been due to a pebble that I stepped on on that run. It was really painful that I had to stop running for 2 days.

Prior to that March16 run was an interval workout (10x400m) using my Adizero Adios. It was my first time to do intervals after a long while so maybe my feet needed more support because of the 2week layoff post-Condura. The 8km run that I had two days after the intervals (with minimal support from the Bikila) may have aggravated that pain on my right foot. I tried the Bikilas again on that treadmill 5k tempo the following week but the pain was emanating again from my right foot the next day. I may have to stop using my new Bikilas (or reduce the mileage when I run on it, probably 2-3k only) to help heal my right foot (running in the Newton Distancia Racers, with better ankle support, has made my runs less pain free for now). I hope to eventually use the Bikilas regularly (i.e. once or twice a week, and probably on easy runs only) once my right foot fully heals.

Add to that are blisters that I've noticed on the balls of my feet since I was using the Bikilas sockless. It might take sometime before my feet gets a little more acquainted with the sockless manner when I run with these babies.

Overall, despite that painful experience (too much, too soon), the Bikilas are still a good pair to run in. They really want to make you run faster, as evidenced by last week's 5:40/km tempo (man, that was the fastest 3k that I've ever ran!). I was even hoping of using them for my upcoming 10k race in Baguio on Apr10 but I may have to be conservative and wear my trusty Newtons. The Bikilas may have solved my recurring right shin splint and left-foot plantar fasciitis during the above runs so I'm really hoping to run in them again soon.

I was quite inspired by Din Cordero's 4:53 result on his maiden marathon (TBRDM 2011) wearing Bikilas for the race. I hope to do the same in one of my future marathons since the Bikilas deserve to be thoroughly tested in longer distances.