World Vision 21km: In the bag!


I treated this race as another long tempo run since I wasn't able to do my scheduled tempo run earlier in the week. Of course, finishing sub-2:20 was a must as part of my marathon program for July 29th. Pre-race meal: 1 Burger Mcdo.

The hot temperature the previous day followed suit on race day as the sun was there as an extra challenge. I was able to compensate by dousing  myself with ice cold water (as in almost taking a shower) as I went through almost every water station. It was definitely refreshing that, probably, I should bring soap next time. Hahaha. Seriously, the cool water helped lower my body temperature (like a coolant to a car's engine probably) as I was able to keep pace.

I took my Hammergel along km6 and 12. I didn't need to take a 3rd gel since I was sustained by the whole banana (almost the same calorie count as 1 Hammergel) that I took along Rizal Avenue coming from Buendia (which was surprisingly quiet as I didn't hear the usual irate drivers honking their horns in disgust).

The effort throughout the race was "comfortably hard," the way one should feel during tempo runs. I was focused on not getting my average pace slower than 6:30/km and studying the route as well, i.e. holding my pace since there are several long climbs in BGC really helped.

Finish time: 2:15:56 (official from runningmate.ph). It was a great run as I was able to log my fastest 21k when under the BGC-Buendia route, and 2nd fastest 21k of all time!

I have to mention that I had a pleasure of joining a race with runner #4026 (Mark Casidsid as per the runningmate.ph website). As I was a little over 1km when the race started, I heard a guy announce "Excuse me, blind runner" as he and a group of Soleus-shirt runners went through. I looked carefully and found Mark in the middle of the group, running at about sub-6:00/km holding a looped rope together with his guide runner. The guide runner (different from the pic below) was barefoot btw.

Their pace was too much for me so I had to let them go. By the Buendia turnaround I saw Mark and his group still going at it. By km17, near Market Market, I caught sight of them again but this time they were walking. I'm suspecting a blow up in the pace strategy or probably the heat may have been too much for Mark. Either way, I clapped my hands and said "Good job! Good job!" as I passed them. 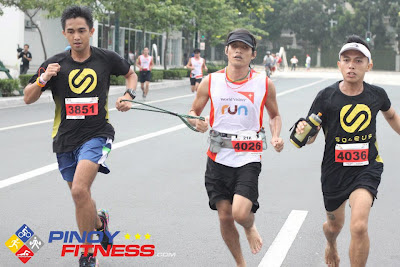 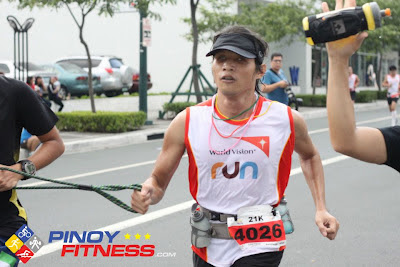 As per the results website, Mark finished a very respectable 2:32:20 (barefoot! Shouldn't this be a Guiness world record?!). I hope to see more of him in the coming races.