I was aiming for 2 goals yesterday, Oct 23. The primary goal was to complete 32km as part of my build-up for QCIM3. The second was to aim a sub-2:20 finish at the KOTR 21km race.

To cut the long story short, I failed on both.

After the effects of a shot of GU taken 35 minutes into the race spread thru my system, I gave into the idea of hitting the gas full throttle as I cruised along Buendia Avenue. I was pacing remarkably well, even logging a 5:50/km on one lap. Blame it as well on the Kenyan 16.8km racers passing us mid-pack runners several kms into the race. It was as if I wanted to run like them too. But, as fate would have it, I lost steam and succumbed to a nasty right side stitch from km15 onwards (there was still some pain the rest of the afternoon which I assume to be caused by my trying to diffuse the pain by pressing hard on it during the race). I was taking a lot of walk breaks than usual, even walking the return-path of the Buendia flyover and the final upward turnaround point at 5th avenue. A second shot of GU at the 1:35 mark didn’t help my cause. By the last 200 meters, I was sorry sight, walking my way across the finish arc as my 305 read 2:22:40.

Now, there is still a chance that I’ve finished sub-2:20 (teeny weeny chance), chip-time wise, since it took me almost (or more than) 2 minutes to cross the start arc due to the 4,000-strong participants of the 21km event. The official race results will provide the answer to that. Nevertheless, this race was a lesson (yet again) that proper and controlled pacing should be considered during races. Oh well, at least the finisher medal was very nice! 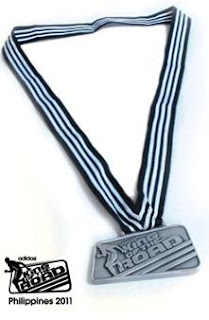 The second goal, 32km total distance for the day, was missed on account of the heat and extreme fatigue after that failed race. I was supposed to run 10km more after the race, but I was jogging at a pedestrian 10:00/km. The morning sun’s heat was terribly early that day so much that I decided to turn back and call it a day.

I’ve yet to run the mandatory 20-mile long run prior to my third full marathon.

I’m hoping that it will come soon before taper period comes.
Posted by daytripper1021 at Monday, October 24, 2011