It's no doubt that RunRio singlets are very nice. But my running-form just produces painful chaffing just below my shoulders near my armpits when I tried it on a 10mile run the weekend before. I finally decided the day before race day to wear the Adidas 2009 singlet instead.

I had a longer time deciding if I needed to wear my hydration belt. Prior to RunRio1, I've been wearing it whenever I run 21k. Knowing that this was a RunRio race, I entrusted my faith in the organizers that sufficient water stations will be available. Hence, I decided not to wear the belt.

For nutrition, I brought along the usual Milo wafer bar and 2 instead of my normal 1 Hammer Gel.

I arrived around 4:40am at BHS (a 1-2km walk from the house made good for a warmup). I jogged for about 400m back and forth at the tailend of the starting gate. Note to self: I really have to do a light jog warmup before races to, well, get me warmed-up.

One can't fail to notice 2 things on the way to the starting corral: the big crowd and the fantastic start/finish arc. Unlike the 5k and 10k events, the half-marathon hosted the least number of participants (around 1,000+) so overcrowding at the start and along the route would not be a problem. I was able to meet and greet Sir Jovie and Anton who were both running 21k as well.

We were off running. Except for some areas of pitch darkness, the first 8kms were fine (I saw Roselle from km2-6 btw). My average speed at this point was at a surprising 6:22 mpk. It could've been partly due to the 1st Hammer Gel that I took along km2. I wanted to slow down but my over eager self who's watched Josh Cox tempo-run videos over-and-over again didn't want to. My 305 recorded 31:26 for the 1st 5k, well under the target time of my set 32mins cutoff. Km4 was recorded at a "halimaw-ish" 6:03?!?!?!!!!

If this was a 10k race, I would've achieved a PR since I clocked in at 1:03:38 (my PR is at 1:04:55) approaching Mckinley Hills. Still under the 1:05 cutoff time for my sub-2:20. As I passed by Magneto, I was glad we won't be passing those damn hills that day. Amazingly btw, you have to admire RunRio since the distance markers (almost per km I think) was very precise when compared to my Garmin (good work Coach!).

Things started to go wrong going into km15 after leaving Heritage Park, i.e. I started to fade in pace. It was most probably due to the inclined part of the course going back up to Lawton. I felt several runners, probably the negative-splitters, caught up with me passing left and right. Runpix stats would later confirm this as it showed 61 runners passed me from km14.7 to the finish line.

Still, I was able to set my second "PR" of the day for a 10-miler: 1:43:51 (my PR is at 1:49). A big confidence-booster that made my way back towards Lawton to the Trion Towers turnaround. Btw, it's good to mention that Hammer Gels (yes you read that right) were given away by marshals inside Heritage Park (nice!). The other reason for my slowing-down could've probably been my overconfidence seeing the 6:23 average mpk on my 305, I thought that the sub-2:20 was already in the bag. What was required of me was to conserve my energy for the last 5km.

But still, pace was going from bad to worse:

After the Trion Towers turnaround, I decided to pick up speed. For just above 500meters from there, a brief respite awaited: it was my wife and two sons waiting for me in front of the condo with my leftover Gatorade. I waved gladly as I was about 100m from them, with my wife pointing my kids towards the direction of their dad. In all my races since I started March 2009, this was the very first time I saw someone who really cheered for me. It was a sight for sore eyes.

I took a sip of the Gatorade (since I had a lot to drink already thanks to RunRio's ampfully-placed water stations ---with ICE COLD water pa!), kissed her and my 2 kids and went on my way to turn right to 5th avenue.

It was a good break from all the running.

It was the final left turn when I saw the finish arc. It was a very welcome sight. With all the energy left that I could muster, I went for it and sprinted to the finish amidst the throngs of people who were making their way around BHS and back to their cars to go home. Suddenly, I felt a strong cramp acting up on my right calf. It was starting to get painful but I was only about 20-30 meters from the finish.

I decided to ignore it and sprinted my way to the finish arc and mat. Km21 would later go down in my book as my fastest race kilometer (so far). It was a mind-blowing 5:11.

This was the 7th half-marathon that I've finished in less than a year since I started running. In all my races, I have never shed a tear when I reached the finish line. But seeing all that training and motivation to a desired goal AND achieve it was just overwhelming for me. This race was special coz it was perfect (in my terms). I was slightly teary-eyed (you won't see it coz of the shades I was wearing) as I looked at my 305 to confirm what I saw seconds ago at the finish arc:

It was, for all terms and purposes, mission accomplished. It was a perfect race. I was able to break 3 PRs (10k, 10miles, and 21k). A big big THANKS goes out to RunRio and their partners for coming up with a well-organized race. Accurate race-markers, ice-cold water at the water stations served by "inspirational" female Superbods, accurate and fast race results, organized marshals, loot bags (which I often miss out on when I run half-marathons), photovendo, a nice finisher's shirt, and, last but definitely not the least, the RunRio finisher's medal. 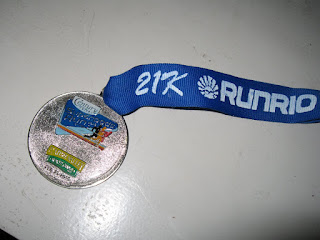 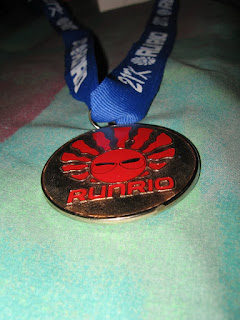 Well it's Thursday already as I'm ending this post and I've yet to see LA. He knows about my finish time already via FB and he replied, "Good job!" I believe he's egging himself now to "unretire" himself to try to beat my new PR. Honestly, I don't think he ever will. ;-)

I'm still basking in the glory of my new PR so I'll be relaxing from running and racing from now until end-March. Running is something I love to do and since Lent calls for sacrificing something you love, I would like to see if I can control the urge to run this Lent. Further, my left knee has been acting up again (runner's knee?) so the rest period is a good welcome. I'll probably do swimming while I let it heal.

My next race will be the Mizuno 10k which I've already registered for. My 2009 was a 1:08 so I have a good feeling that I could beat that in this year's Infinity Run. After that, it will be my planned 13-weeks of training.

The urban everest awaits.
Posted by daytripper1021 at Thursday, February 25, 2010