Just having finished the NB 21k the other weekend, I was excited to drive back home from BHS. The reason? Owa, my mother-in-law, just arrived back from the US. Apart from the Kobe Bryant 2008-2009 season championship jersey that I asked my sis-in-law there to buy me from Staples, I was about to get my first hold of this:

Yup, the Garmin Forerunner 305. I was able to find one via amazon.com and asked my sis-in-law there to buy on my behalf for US149.00 (or about P7,500.00). The price is about 25% cheaper than the rates being sold here so I was glad to finally get hold of one at a bargain.
Why did I decide to buy one when prior to this I was an avid Nokia Sports Tracker Beta (NSTB) user? There were two main points actually:
1. I've outgrown the NSTB such that I was looking for more in terms of features. Nokia has still labeled this current version as their beta version ---a sign that plans to release an improved FINAL version is not in the near future. Comparing it against what I've read with Garmin/Polar users, the NSTB application doesn't have a Pace Alert function. Yes, knowing one's current pace by looking at the phone is good. But you can't be looking at the phone ALL the time during your run, would you? It would be good if the NSTB would alert/beep if you were ahead or behind your intended pace.
2. Working for a telco company and being issued test phones is a great bonus. Since I've discovered running and the NSTB, I was able to malfunction (by accident, mind you!) two of our Nokia test phones namely the N85 and the E52 ---both good high-end phones. Whenever I ran with these NSTB-enabled Nokia phones, I would usually have them inserted on an armband that fits snuggly on my arm. However, my long sweaty runs would somehow find the phone covered in sweat. This caused the sweat to find its way to the phones' circuits (through the buttons or speaker screen) and short-circuit it. Seeing the NSTB conk-out during my NB run even when I was just at 1.46kms of my half-mary was the last straw.
Since Nov29 I've been tinkering on my new toy and employing it on my morning runs. So far I was able to use the pace-alert, heartrate training zones with my tempo runs, speed zones, and this morning the virtual partner which I beat in a mock 6km race by about 20meters ("You win!" said the Garmin). Uploading my runs to the laptop using the free Garmin Connect software is a breeze as well. I think there are still a lot of features I haven't discovered yet so it'll take sometime before I get to discover its full capabilities.
My Garmin's Race Debut
Dec5, Saturday. It was the closing ceremonies of our company's sportsfest. Our CEO, an avid runner, has staged again another 2.5/5/10k event at Heritage Park ---the same event and venue held last July for the opening ceremonies in which I clocked in at 1:08 in the 10k event. It will be organized again by Coach Rio's team so I was confident that it will be well-organized so much so that I didn't even bother to bring my hydration-belt.
Since the day before race day I was up and about thinking on what to program in my Garmin for the race. Going sub-60 is still a dream right now so I opted to at least improve on my 1:04:55 10k PR set at QCIM. After much deliberation, I setup a workout program in my Garmin for the race as follows:
Km0-1. 6:30-7:00 mpk
Km1-5. 5:00-6:00 mpk (Yeah I know. 5:00 mpk. I couldn't believe I can run that fast now)
Km5-6. 6:30-7:00 mpk
Km6-10. 5:00-6:00 mpk
Km10-11. 4:00-5:00 mpk (pangarap lang yung 4:00 mpk. Malay mo, di ba? Hehehe)
The program was set in such a way that I have at least a time to warm-up at the 1st km, run like hell from kms2-5, rest again between kms5-6, then a final push from km6 to the finish line.
Assuming that the course was exactly 10kms and that I never exceeded the max set paces above, I predicted a 1:02 finish. I added the Km10-11 pace above just in case GPS variances would cause the race distance to exceed 10k.
Race was supposed to start 5:30am but since most of the bosses (and feeling bosses) arrived late, the gun start for 10k fired at around 5:50am. There'll be 4 loops for the 10k runners since 1 loop was about 2.5kms based on Rio's map.
So off I went with my Garmin. Needless to say that I was able to follow the workout I've setup to the letter. Although the beep to speed-up or slow-down was irritating (especially nung super-bagal na ako, i.e. behind my planned pace), I find the pace-alert function to be a great aid. I was not mindful of getting fatigued on the latter kms (thanks as well to a serving of Hammer Gel that I consumed partially between Km5 and 7.5) and concentrated myself on meeting the pace that the Garmin commanded me to follow with its constant beeping.
I reached the finish line at 1:05:05 ---just 10secs slower than my 10k PR but more importantly, it was a big improvement versus the same race/route last July: exactly 3mins and 18secs better. My Garmin recorded a distance of 10.61kms (buti na yung sobra kesa kulang).
I find the Garmin 305 to be a great training tool for runners like me who'd like to improve their time. I highly recommend any runner to get one. If I may quote the RunningDiva when I was able to meet her after the NB 21k run, "[the Garmin305]......it is a basic necessity [for us runners]..." 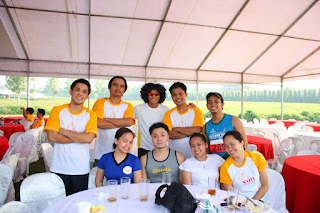 A quick pic with idol CoachRio and my peeps (that's me to Rio's left)
Posted by daytripper1021 at Tuesday, December 08, 2009