I was lucky to have that 10x200m hill-repeat session 3 weeks ago and a hilly 10km Subic long-run the weekend prior to this race in BGC because once I saw the route days before the race, I only felt a tinge of fear (usually, it's a heap of fear) upon seeing the Lawton-Bayani-McKinleyHill leg of the route. It’s like Mr.Bean’s classmate who was happy to see that the questionnaire for their exam was for Trigonometry, the one that he studied for.

The only question left was as to what pace should I run this one. After a manageable short tempo run the other week (5km averaged 6:35/km), I decided to settle for an even-paced run at 6:30-6:40/km effort.

The race started on time (5:30am for 16km) and we were off. I decided to take it easy in the first km (even doing a #1 just before the 1km marker, hihihi). I was feeling good at this point, deciding on banking on good km-splits early on since I know I could be in trouble pace-wise on the uphills later on.

I managed to go thru Bayani Road’s return uphill climb. The difficult part, as expected and as recounted by many, is the McKinley climb from C5. Everyone was either on a slow-jog or walking ---I was partly both. When I reached the top back to Lawton, it was time to recover my bearings and just go for it.

By the last km I was pushing hard, even with a side stitch. “Pain is temporary,” I thought, as my GF305 passed my 1:45 target time. My 2009 1:49 PR seemed to be there, teasing me that I won’t be able to beat it. I even resorted to daring myself to beat this guy in a black compression shirt and Garmin310XT, but failed. The shoelaces on my left Brooks Green Silence got loose (time to buy Yankz?) but I resorted to run. 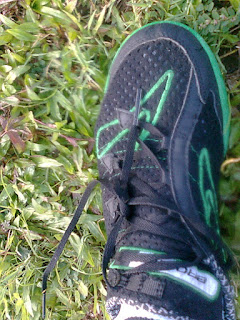 I ran as fast as I could though and, as I made that last turn, glanced at my 305, I rejoiced and raised my left arm in a victory fist as I approached the finish arc:

3rd PR-breaking race in a row. 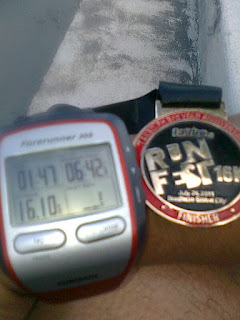 I got my medal and rested by the sidewalk which was at the last 200m of the race. As I saw fellow running-bloggers passed by (Sir Amado, Roselle, and Sir Jovie), I could only thank takbo.ph for helping me discover their blogs and keeping me inspired thru their posts. I’m thankful as well for takbo.ph for the “race schedule” updates that they post, keeping me on my toes as to when’s the next race that I would like to join in. 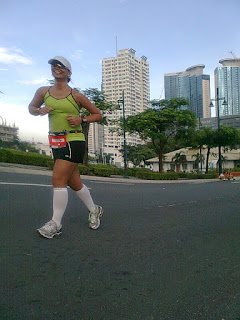 Giving back to takbo.ph, via this recently concluded Runfest, was definitely a good choice. Thanks Jinoe and Queenie for a giving us a great race!
Posted by daytripper1021 at Monday, July 25, 2011