The Milo Finals lived up to the grandeur and prestige that has made it known for the past 33 yrs. Patches of green everywhere as I entered the 21k starting corral at kilometer 0. A stage was at the right where opening ceremonies were held. People from all walks of life arriving and getting ready to run. With race organizers Rudy B and Rio at the helm, I was confident that the race will have a smooth ride. But will I be able to endure my 2nd half-marathon after EcoDash?

The starting gun blew a little before 5:30am and we were off. My strategy for this race was to try to employ the 8-8-5km which I failed to do at EcoDash: 8kms easy, 8kms fast, and 5kms all-out (or RTYP). I ended km1 at 6:20/km which was too fast for me so I adjusted my pace to 6:45/km, zeroing-out all temptations to speed up as runners overtook me left and right. I just told myself, “Mamaya I’ll get you!” An exception to this was Bull Runner whom I saw charging and overtaking me as early as km4 at a fast, comfortable pace. She’s one tough/seasoned runner, I thought.

6:45/km was my pace all throughout Roxas Blvd. I noticed my Nokia GPS was about 100m off compared to the race markers so I only referred to it for my average pace while I would look at my stopwatch for my per km pace. As long as it was less than 7:00/km, that’s good enough for an easy pace. The Buendia and EDSA flyovers were a synch since they were not as long as the Kalayaan flyover near The Fort that I got used to.

By km10 going towards Buendia, I was 1:07 based on my clock. Good. This would definitely bring me within the 2:30 cutoff time I thought. Along Buendia, I was amazed at how the organizers/police/MAPSA were able to control vehicular traffic for the runners. By the time I reached Makati, Buendia was fully closed to motorists. Congrats guys for a superb job!

Right after Quirino Hway, I started to get hungry in spite of the Sport Beans that I was carrying. Call it right timing, a few meters away I saw my scheduled food stop: the Reinier-Pacific, Takbo.ph aid station. It was time for a banana break. I was able to grab a cup of banana from one of the guys there. Incidentally, I also saw Sam of RunningNinja.

I revised (again) my 8-8-5 strategy such that I’ve kept my pace at 6:45/km until the final turning point at PS Bank. After which, I’ll increase my pace.

And improved on it I did. Passing by the aid-station one more time (and one more cup of banana), I saw Queenie and Jinoe and said hi. I was invigorated to go boost my pace such that I clocked in at 5:22 and 5:24 at km15 and 16, respectively. I’ve never done a negative split race before and this could probably be it. A chance to beat my 2:24 EcoDash 21k PR.

Then, the unforgiveable, regrettable happened. From km17-21, my pace dropped to 7:37/km down to a miserable, regrettable 8:26/km. I recall making my last turn towards Roxas Blvd and seeing the “KM3” marker and, well, couldn’t pick up my pace anymore. I tried (really tried) but my legs can only run at a very slow pace so much so that I did something that I’ve never done for a long time in previous races: taking walk breaks. It was like that towards the last 3kms of the race. By the time I reached Padre Faura I already knew that I will miss the 2:30 cutoff based on my estimates. Finish the race, I said to myself. A DNF is totally out of the question. It was getting hot and the cars at the other side of Roxas started growing and contributing to the morning pollution which didn’t help my cause. I was even hoping that the race route would turn left right after the US Embassy to ease my woes but, obviously, it didn’t. It was a difficult one last gasp to reach the finish as I passed by km0 with one of the race-hosts shouting my name on the microphone and saying, “Kaya mo yan!”

Yeah right. I’d like to see you do a 21k and beat 2:30. Yup, it was all negative thoughts by then and I just wanted to reach the finish line. Almost every 21k and 42k runner was overtaking me left and right. Even my mp3 playlist couldn’t help inspire me to run faster. I was a pitiful site.

I crossed the finish line at 2hrs 41mins (unofficial). For a 7:05/km average pace, I found my performance to be very disappointing. Before the race started, I was very confident that I would finish faster than 2:24. Why why why why???? WHY?!?!?!?!

By km19 I was already thinking of all possible “excuses” for this regrettable finish. Like how my bosses in the office would require post-mortem reports on why system outages occurred, I HAD to make one for this race. Here they are:

1. My long-run training mileage only logged two 15km weekend runs (or a total of 30kms) prior to Milo. The rest were either 5 or 10kms. This could be one main suspect why fatigue overwhelmed me right after km16 of the race. I didn’t retrain my body to go near the 21km distance. Maybe one 19km long run would’ve been sufficient. Incidentally, I logged a lot of long-runs prior to EcoDash (16, 18, 19kms before tapering off) so I think this was a major factor for my poor finish.

2. On my last turn to Roxas Blvd at the “KM 3” road marker, I started feeling pain on the ball area of my right foot. It felt like a hundred sharp thumbtacks were hitting it as I made every step that it caused me to take walk breaks. Could it be fatigue-related (I'm still feeling the pain until now)? Could it be shoe-related since I was still wearing the wrong shoe-type (my Adidas Response Stability shoe will only make its race debut by Oct 25’s Adidas KOTR 21k)? But I never felt this at EcoDash so this couldn’t be a good reason (yet a very painful experience). 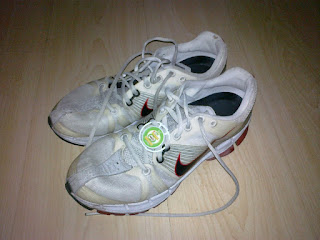 3. Weather. EcoDash weather was cloudy, rainy at the time so many PRs were set including my 21k debut. Could the hot sun by km17 onwards and the pollution at the Buendia area contributed to my deteriorated race pace? It’s highly possible but you can’t have an ideal race weather everytime.

Either way, my Milo race debut is something that I would need to improve on. It was supposed to be easy but turned out to be something I would like to forget. It might’ve been a case of overconfidence, taking the the 21km distance, nay, taking the MILO 21k very lightly. I may have totally underestimated it.

Still, it was another 21km race finished in my book. Still, a great achievement.

For now, it’s back to training for me as another half-marathon looms in two weeks: the Adidas KOTR. I hope to do better then, readjusting my training in time for that race.

Again, my heartfelt congratulations to the Milo Finals organizers who did a superb job. Everything was managed very well. Thanks for a lot of giveaways too!

My thanks as well to Reinier-Pacific and Takbo.ph volunteers for the aid station at Buendia near Pasong Tamo. You were all great!

To the MILO 21k race route and 2:30 cutoff time: you have earned my respect. I’ll get you next year. 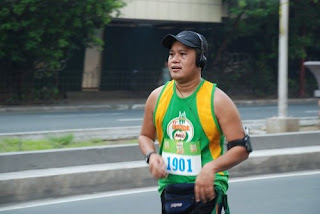