That was GS, a vendor to our company whom I chanced upon at RUNNR Store BHS last Saturday morning when I decided to have my foot analyzed. He has the knack of making up stories (with yabang) every now and then so he telling me he was running for an hour is an obvious fairy tale since I know he really doesn't run.

I've been wanting to have a gait analysis since I've been reading takbo.ph posts on such that were available only at RUNNR and Second Wind shops ---stores specific for runners. That was why when the missus and I were at The Fort area I made it a point to finally drop by at RUNNR. Further, I have an uneasy feeling that the Nike Victory shoes that I bought since this whole running addiction started last March may not exactly be built for my feet.

I was ahead of GS on the queue although wala pa namang masyadong tao since it was only about an hour after the store had opened. The saleslady had pointed me to that foot-type analyzing plate (sorry I don't really know the exact name for that) for me to step onto. As I lifted my feet, there was a weird look on her face.

My feet appear to fall under the Normal arch category but the left seems to be more neutral than the right. So magkaibang shoes dapat per foot? Ahehe.

Next, I was asked to run barefoot on the treadmill for no more than a minute. Results of the run showed that my left foot is running normal but my right is severely overpronated by about 7 degrees off. The slowmo replay of my barefoot run clearly showed my right knee seemed to be heading outward right as my right foot touched the ground. Angle showed 186.9 degrees.

The verdict? I need a stability shoe.

My current running pair of Nike Victory is classified as for neutral foot runners.

NGEH!!!! So THAT's why my right foot (mid outside area) seems to be aching a little everytime I run! Hay, sayang naman yung nabili ko.


The saleslady showed me the stability shoes (she offered me the Nikes, Adidas, and NBs) that they got but one thing that I noticed is hmmm...parang di ko type. I would've wanted a Mizuno but she said the stability shoes of Mizuno are only good for short distances since the firm part (that gray area on the inside part of the sole that identifies if a shoe is for stability) is only of a short length. Parang di ata ako naniwala sa explanation nyang yun. Baka salestalk na yun gaya ni GS pag may binebenta sakin. Hehe.

Still, the gait analysis at RUNNR was really insightful (and free, hehe). 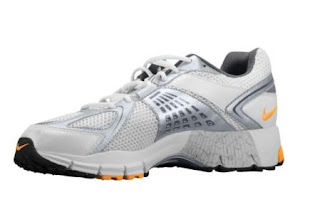 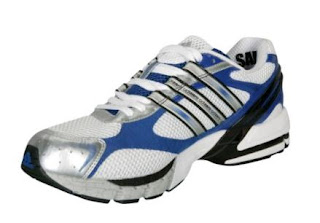 I have a few questions that you might know the answer to:

1. Can my overpronation be corrected by buying the right shoe? if YES, can I later on move to a different shoe type once it's been corrected or nakatali na ako sa shoe foot-type na yun?
2. Is the Adidas Adizero Aegis for runners that require a stability shoe?
3. Pano na yung Nike Victory ko? Can I still use it kahit for recovery/short runs? Sayang kasi eh.
4. What other stability shoe do you recommend? Mizuno sana gusto ko.

It's very likely that I'll buy the Nike Airspan 6+ since I can use my accumulated Citibank Rewards Points to claim a P2,000 Nike Park voucher so parang P1,300 na lang cash out ko. This is an obvious choice since money is rather tight for me nowadays.
Posted by daytripper1021 at Tuesday, August 11, 2009