I was coming into this race not specifically trained and not in shape (blame it on the Speculoos spread, hehe). With my last bike-run brick days before going into bonk city, I had to surrender that I won't have the optimal run pace for this event. Thus, the overall strategy was to put no pressure at all and just run at tempo effort. For the bike, I planned to gain lost time from the runs and enjoy(!!) what the SCTEX will have to offer.

Run1 went smoothly with no issues as I lapped between 6:10-6:30/km based on my Garmin. I did pretty well, effort wise, as I controlled myself from speeding so I have enough for Run2.

It was off to T1 for the bike leg.

The transition area was quite long, probably close to 300 meters. As my bike was towards the end, it was a long run before I reached the bike.

I started the bike leg, well, not as smooth as I hoped it would be. I was pedaling hard as I could see that the road was flat but my cyclo computer showed I was on the lower 20s kph range.

Thus, my introduction to false flats.

false flat. 1. A surprisingly difficult section of road that looks flat but is actually slightly uphill. Usually, no matter how hard you pedal you go way slower than you think you should be going. 2. A stretch on a long hill that looks flat and tricks you into thinking you've reached the top when there's still more climbing to come.


It was a long gradual climb all the way to the turn around. But once you get there, it was pure heaven of biking downhill with speeds up to 52kph(!).

The word ENJOY may not be enough to describe how I felt on that part of bike leg. My new 50mm aero wheels couldn't agree more (wink wink). Towards the end of the downhill was the turnaround, and yes, back up again to those false flats and climbs. It was agonizing to see myself being overtaken going up, but it was enjoyable on the downhill (weeeee!!!! hehehe). Unfortunately I lost a lot of time no thanks to my poor climbing skills so it was up to Run2 for me to gain ground. I had a 2:30 finish time to catch.

Approaching T2 I was able to unclip my cleats and ran barefoot with the bike towards my station. Unfortunately, I was stopped by a race marshal as I unclipped my helmet without reaching my station yet, so I had to clip it on again loosing a couple of seconds. Lesson learned.

I reached my station, hung the bike, changed gear and was off for the last 4k run.

I was still feeling good during Run2 so I ran better but didn't really force it as I was afraid of bonking. I was lapping at probably 6:05--6:15/km, with my last km to the finish at about 5:57/km.

Another lesson handed to me by the uphills. My bike climbing skills require a LOT of improvement.

On a positive note, it was a good race effort for me overall. Run1 was controlled and Run2 felt great effort and pace-wise. I need to train more to get back that optimal race speed again.

Yes, I will gladly sign up for this event next year! 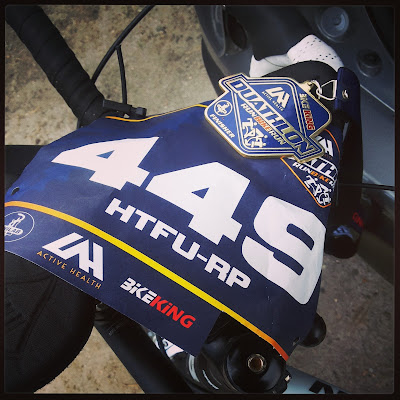