My performance in last Sunday's Race for Rage 16k, similar to my discovery of Foster The People's "Pumped Up Kicks," could be, personally, one of my most unforgettable performance to date.

I came into the race armed with 2 months of Maffetone-paced training, running at least a 16k long run once week, 2 or 3 tempo runs, and 2 interval sessions. The race was meant to measure how effective the 2 month Maffetone slow-paced, HR-based training was to my running, and obviously, to open my racing season for 2012.

I only finalized my strategy for the race probably the night before. The plan was to treat this as a long tempo run, starting the 1st kilometer at a comfortable easy pace, then try to keep at a constant 6:30/km effort up to the finish line. This would bring me, hopefully, below my 1:47 PR.

The race attendance was estimated to be at around 3,000 according to the race host, with many of them joining the 16k race although not as big as your usual big races like Run United or Condura.

The 1st km went off alright but in retrospect, I think I started a few seconds too fast (6:53/km). I was expecting to clock in at 7-7:30/km but I think the adrenalin rush pulled me to run faster than my target.

It would become evident by the 1st aid station that there'll be no sports drink for this race, only water. Thus it was good that I brought along a pack of GU which I consumed inside km5. I was hoping to reserve it at the 1hr mark but since my last meal was Saturday night (dinner at Chocolate Kiss in UP which is very good I might say) I had to take it early. It was a gamble since I wouldn't know if it'll last up to the finish line (thankfully it did!).

Kilometer 2-13 was where I became fully appreciative of that 2 month Maffetone training and my tempo runs. Not only was I cruising at an average of 6:25-6:30 lap after lap, but I was doing it at a very comfortable, easy effort. I could hear the other runners that I pass breathing heavily at a slightly slower pace so I was amazed at how effortless 6:30/km seemed to be for me. I was at PR pace and passing everyone left and right (including that fella who ran barefoot wearing a straight jacket, hehe).

By km14 my plantar fasciitis (PF) flared up, making every step of my right foot hurtful. I was struggling, but still on pace. This happened after the Buendia U-turn on the way back to BGC which had a slight uphill degree. Climbing the infamous flyover was an effort but not as heavy as my past races involving trudges up and down the Buendia monster. The PF was still there so by the time the flyover flattened I had to walk it off a bit, probably losing about 20-30 seconds. I had to numb the pain mentally and just push myself to finish the remaining 2 kilometers.

Thankfully, after Rizal Avenue it was all the way up to 32nd street towards the finish. I sprinted the last 200meters (amazed that I still had more left in the tank), lapping the final kilometer at sub-6:00.

Whether it was Maffetone, my "nilalaban ang katamaran" long runs, tempo runs, or the mix of all three, I am very thankful that I was well-prepared for this race. I think training exclusively for a few races and not racing week after week suits me best based on this race performance so I think I will stick to this scheme for now.

Now if I could only replicate this performance to a full marathon....hmmm.... 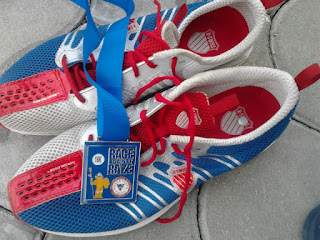