I'm starting to dislike running/race expos. The matter of claiming your singlet/racekit should be simple and fast. Adidas KOTR 2009 was such an example. For those of you who were there at SM Megamall Megatrade, it was mayhem just to claim the racekit. The following year, KOTR 2010 scrapped the expo altogether and just gave the racekit upon registration.

I thought that was the last of that.

Well, Mizuno Infinity Run 2011 seemed to have followed suit. I heard that the first day of claiming (Jun2) was mayhem as well so I decided to claim the next day.

From my office in Ortigas, I left lunchtime and drove all the way to Mizuno Magallanes only to be approached by this sign at the lobby: 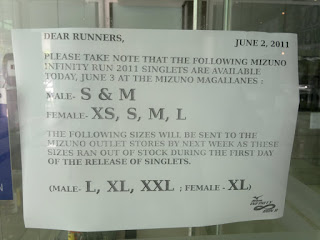 I tried on the M-size but I felt like a suman (not really a sight to behold if you'll see me race on a singlet of that size).