Condura Preparations: How am I doing?

Preparations for my 2nd full-mary on Feb6 began as early as August last year with the conscious effort of racking up the weekly mileage with the recommended 10% weekly increase. This was a lesson learned from my 1st full (Milo Manila elims) wherein I tried to do the impossible of squeezing a 12-week training program from F.I.R.S.T. which I can conclude, on personal experience, that it’s not recommended for virgin marathoners. The result then? Plantar fasciitis on my left foot, left knee patellar tendinitis, dipped in disappointment sauce. Thus, the need for building up my mileage from zero-mileage post-Milo (since I needed to recover physically and mentally) starting from August was a must in order to have a good mileage base and be injury-free prior to the actual 16-week training phase. 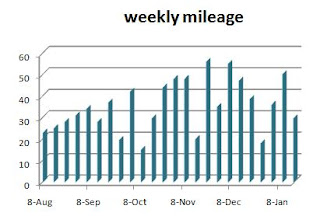 The mileage increase went well from August to Sept (peaked at 42km on the last week of Sept) but then skidded in the 1st half of October due to a bout with the flu. Fortunately, the half-marathon season was into full swing so I was able to get the needed mileage by the time the 16-week training started (Adidas KOTR 21km).

It was generally all rosy from there (did my longest training run via RunRio3 32km as a highlight) until post Milo Finals (mid-December) when the weekly mileage dropped again. The culprit was an injury I sustained on my right knee after playing basketball with old college friends. This resulted into two weeks of no weekend long run. I recovered during the 1st week of Jan 2011 (highlighted by a 12km easy run I did while on vacation in Subic which was a welcome respite from my city runs) but then got sidelined again since last Sunday when I scrapped my planned last long run (32km on my sked) due to stomach issues. I’ll spare you the details of that worst run of my life (resulting only to 11km) but let’s just say that I painted Lawton Avenue with the food I ate from the night before. Yup, chalk that one to gluttony.

I’ve been recovering these past few days since that Sunday run, opting to do VMO strengthening exercises for my knees and stretching as well. I’ve managed a measly 5k this week, so I hope to redeem myself by reattempting that lost 20-miler this coming weekend. After that, it’s only two weeks until Feb6 so I hope it’s still enough time to taper.

Overall, I’m better off in my training this time around compared to Milo. If I compare that 12-week training for Milo versus the 1st 12 weeks of training for Condura, I have more mileage under my belt this time (495km now versus 401km for Milo 2010). Further, I’ve learned to ease off when I don’t feel good after a run, not minding the extra recovery day since I’ve learned that it’s part of the training as well.

The weather throughout the duration of this training has been cool overall versus the time I was training for Milo which was the summer months (April to June). This allowed me to finish my long runs with less walking in the end.

Speedwork, particularly intervals, have been put into my training this time to complement tempo and long runs. The discovery as well of quick leg turnover, or QLT, has helped me a lot too although based on the 180 steps/minute recommendations I’m about 16 steps short ---still not that bad. Another discovery of wearing lighter shoes, particularly gateway minimalist shoes like the Newtons and Adidias Adios, has helped me refrain from heel-striking which I believe has improved my running gait ---that and a lot of reading to be specific.

My short-term goal now is to be able to complete that 20-miler this weekend. It’ll help me gauge my overall condition (and goal) entering Condura. Long term, a sub-5:00 is a hopeful goal but if I were to assess my current fitness level, a 5:20-5:30 finish is more realistic. A 5:45 finish, for me, would be disastrous (unless the race runs out of water like last time in Milo) since I’d feel that a 5:45 time is not deserved will all the hard work I’ve put in since August.

Well, let’s just see how it all plays out come Feb6.