Postponed for several weeks, finally, the NB Power Run had its way yesterday morning. I have to say that this was a very organized race so this post begins with a big “CONGRATULATIONS!!!” to the race organizers for doing a terrific job.
The Training
My training for this race (courtesy of RunnersWorld’s Smart Coach) consisted of 6 weeks of easy short/long runs, tempo runs, and speedwork. I wasn’t able to do the latter since, well, I was too lazy to do it (parang complicated naman yung 1600m sukatin tapos may 400m jogs pa, hehe). I modified the easy runs such that the 1st half of it were in easy pace while the latter half would be RTYP (run til you puke) pace.
The 21k race route will be done entirely inside Taguig so the dreaded Kalayaan Flyover will not take part. However, the last leg of the route, McKinley Hills, would prove decisive for any half-marathoner who participated that day ---including myself. Although my weekend long run included the Horseshoe Village hills, it was NOTHING compared to McKinley which I last trekked during the Autoreview 10k months ago.
Even with the knowledge of Mckinley Hills in the route, I still didn’t have enough hill-training for those 6 weeks. Eventually, all that training (and non-training) will show come race day.
The Plan
The plan was to treat this as any other weekend long run: 1st half easy, 2nd half all-out. I was egging myself to beat my 2:26 PR on my maiden half-mary at EcoDash. Seeing that I’ve improved on my training and in-race nutrition habits, I was hoping I would beat it this time around.
The Race
I warmed up with an easy jog for about 400-500meters around BHS and did some stretching when I got into the corral ---somehow a 1st for me for 21k (I wished I did it more often, hmmm. Dapat pala maaga dumating lagi, hehe). Before I entered the corral I managed to see Men’s Health Mag’s model Pio warming up. Yup, he’s running 5k again. I was able to see some of my office friends and known bloggers Pojie and Bull Runner waiting inside the 21k corral as I checked in. Btw, I ate ½ of the Milo bar just before the race.
The race started at exactly 5.30am with the usual gun-start. Too bad there was no 10-second countdown so my stopwatch and Nokia GPS tracker weren’t in sync with the official time. It was probably off by about 10seconds.
The first 10k went well as planned. For nutrition, I ate ¼ of the Milo Bar at km6, then ¾ serving of Hammer Gel in the middle of km9. Well, if easy pace was supposed to be at 7:00mpk, I did more than well as I clocked 1:05 after 10k (my 10k PR is 1:04 so this really WAS good). Surprisingly, at this pace I was feeling good, no pains whatsoever. The only downside at this point was that my Nokia GPS tracker conked out as early as km1.46 (ahhhhggghhhh!!!!). I had to rely on the km-markers to calculate my current pace. Well at least it helped my brain get busy with all that subtraction, multiplication and division.
At the 10.5km mark, I shifted up a bit as planned and still felt good. Looking at my pace around km13 as I left Bayani Road towards Lawton, I was 4minutes ahead of the 2:27 total time, averaging about a little less than 7:00mpk. It was very tight, but I felt good that a new 21k PR was on sight. Or so I thought.
The Hills Have Eyes

I would like to christen Mckinley Hills with a new name: Magneto. It grabs you in, and you won’t be able to get out of it with the same energy as you came in. It will suck out every ill-prepared runner of his/her running strength just before you leave it.
At this mind-bending, strength-zapping part of the race, I have to admit, the Buendia-Kalayaan flyover is ‘peanuts’ compared to Magneto. I’ve seen many of the runners succumbed to walking, even stopping for a while.
Fortunately for me, I didn’t walk. But on that last leg, that final incline that even my 45x45 or 30x60 high school drafting triangles won’t be able to measure, I was running so slowly that the walkers next to me seemed to be at the same pace. It was VERRRRY tempting to walk (I saw and greeted Sam who walked just before he left Bayani around km12 so this added to the temptation. He walked, so why can’t I? I also saw and greeted Pojie inside Mckinley Hills just before the descent to the Japanese embassy and he was walking too) but I just psyched myself to keep on running. It was killing my thighs but not my mind. I left Magneto alive and hopped on back at Lawton avenue with a lot of precious time eaten up. Could that 2:26 PR be beaten today, I thought?
It was probably km19 when I left Magneto so my mind was all go-go-go. I ate the ¼ remaining Hammer Gel and cooled my head with water. I wanted to run harder but my thighs were still tired from all that hill-climbing. It took quite a long while, probably upon seeing the km20 marker, that I just threw everything out of the window and ran as fast as I could. Seeing my stopwatch at 2:20 and with an assumed calculated pace of a little under 7:00mpk, I just went for it.
I ran the last 100meters like there was no tomorrow but, as early as I made that final turn, I knew that the 2:26 PR would not be beaten this time.
My time: 2:27:40 (unofficial).
Ahhggghh, missed it. But still, it was a great time since I managed to beat my Adidas KOTR time of 2:29:55. It was STILL a big improvement, moreover that this route included Magneto. Maybe if Mckinley Hills were not part of the route, maybe I finished at 2:20 (naaaaks, sobrang bilib ba sa sarili? Hehehe). Probably yes, but still, it was a great finish time.
I decided to let go of my PR-failed thoughts when I ran to a lady-organizer who hanged this over my head: 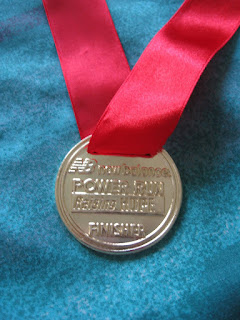 My 1st ever finisher’s medal. Wow. After just having started running last March, this was just precious. It encapsulated all that training in the early mornings, all the money invested into my running gear, and that 12lbs (and counting) weight loss. The feeling was just…..beautiful. I’ll probably have all my 2009 race bibs put into one glass frame with this medal in the middle. Yup, bragging rights. ;-)
What I learned from this race was that I must train based on the race route. I should've done hill-training since I had prior knowledge of meeting Magneto. Kumbaga kay Coach Freddie Roach, I should've studied the tapes (in this case, the race route) and trained accordingly. Yup, there'll be another bout with Magneto in future races pero wag muna ngayon as my thighs are still aching, hehe.
What’s next?
It’ll be the closing ceremonies of our company sportsfest this Saturday at Heritage Park. Along with it is the fun run where I’m joining 10k. Four 2.5km rounds around Heritage Park as how Coach Rio’s group organized it last July. I finished it at 1:08 so I hope to improve on it this weekend. Hopefully, improve on my 1:04 10k PR as well.
Plus, between now and Saturday, I’ll find out how to use the contents of this box that had just arrived Sunday morning. 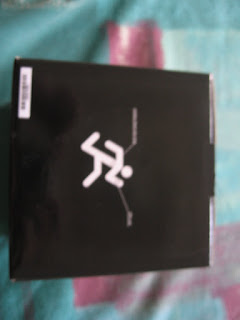