Drove from QC to Clark for this one in the early morning, arriving an hour before gun time which was sufficient time to claim my race kit and setup my bike and other gear.

The number of participants totaled 400+ as per the race emcee, which made for an "intimate" setup compared to other races I've been to. The race venue had a "local, close knit" feel to it which made the whole race very comfortable for me (in terms of non-grandeur). I didn't feel a tinge of race nervousness as I've done this lots of times (although my last Standard Dua was last 2016), and add to the fact that I put my trust on the weeks of training that I did coming into this one.

"You've Got This" was going to be my mantra for this one, I thought. 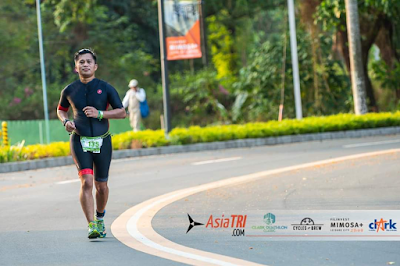 This was good, I thought, as I went into the transition to get my bike. As mentioned on my last post, I'll be racing with my new BMC TMR02 frame which will have to prove itself on this semi-technical, "wall" laden course.

Left the transition after 2.5min transition and pedaled off to the bike course. The TMR02 made its aero-ness felt on the flats and descents, letting me cruise above 30kmh with little to medium effort. Surprised that I was at this rate up to the U-turn which started the trek up to the dreaded "Wall" which I estimated to be 4-5kms of gradual to semi-steep gradient.

This was where I had to recall all my indoor rides which I suffered. I just buried my head, embraced the suffering, and pedaled sub-FTP effort. It was one of the longest (10-15mins probably?) moments in the race that I wanted to end. The climb subsided to a descent and then flat to complete the loop...

Yup suffered again on that long climb, and just saying my mantra all over in my head:

After 1 hour and 26mins, I was back in the transition area for Run2. Gel taken at 17mins and 1hr 10mins during the ride.

One question did enter my mind as I was changing to my run shoes: "Did I push too hard sa bike? Do I still have enough for Run2?"

I opted not to take a gel prior Run2. A gamble on my part, yes, but I learned that any gel taken at the time, for a 5k run, will not be "cooked" in time for my energy consumption. I will just have to run this with all the fat stores remaining ---which for my overweight self would be aplenty. Hahaha...

Onto Run2, I suffered as expected but not as worse as my previous duas since I was pacing somewhat well at 7:00/km (I usually expected it to drop as low as 7:30 to even 7:40 on previous races). I was able to analyze why this was after I looked into my bike numbers: lower watts, higher cadence but at the same speed as my 2016 races. I was in a better condition coming into Run2 (di kasing pagod as previous). I guess the TMR02 (and my Trainerroad training sessions including bricks) have helped me a lot. Hehe.

I was taking short 5-10 sec walks (especially at the hydration stations) to recover but just willed it to run amidst aching thighs. Looking for other races up front (and those chasing at the back) as targets to keep me motivated to run (which worked, mind you).

Finished Run2 at 7:08/km which was outside my 6:30/km but still respectable in terms of previous duas (as earlier mentioned). 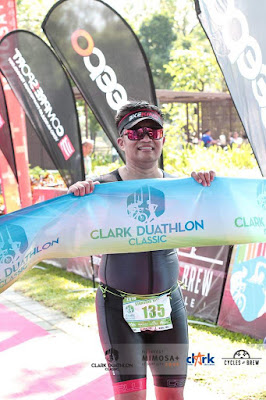 Total race time was 3:17 and change, which was a far cry from my 3:02 PR. To my defense, that PR was in Subic where the Bike leg was on Raceway which was mostly flat. No climbs such as "The Wall" to defer any PR chances.

Food for thought though is how I finished within my Age Group (45-49). I finished 19th out of 29 and ranked on the different segments as below:

You just have to admire at how fast these duathletes (at our age ha!) are in spite of all the training I did ---kulang pa pala!

Transition was not on the race results so I probably dropped considerably to 19th due to slow transition time. Need to improve on that one too, I guess.

Well, I will take this week lightly to recover (my Garmin 920XT said I need 4 DAYS to recover, hahaha) so I am DEFINITELY following that. Hehehe...

In closing, this was a great result considering the training I did. I guess the amount of training done is really commensurate to the race result so I will have to put in more (volume) coming into succeeding races, be it duas, bike races, or run races if I want a better result.

The "You've Got This" mantra really worked. Hmmm...maybe I should get a sticker for it to put on my bike's top tube for motivation. Hehehe... 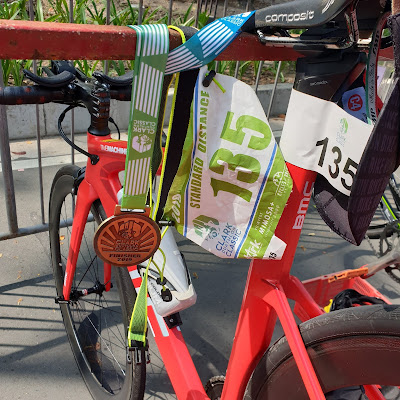