I was doing well for the first half of the race, keeping my pace at around 6:30-ish per km. I have set my GF305 to countdown from 2:20 ---my hopeful target time--- so I believed that I was in pace even though I was zig-zagging my way among the 3,300 other 21km runners who registered at the first few kms (2,100+ actually finished 21k as per the race result page).

The effect of lacking long runs (longest at 15k) was felt when I started to trudge Buendia Avenue just after the turn-around. It was a long crushing climb back as I was run-walking for some time. I managed to check my bearings and resisted to stop at the Buendia flyover return path, jogging my way at a slow 7:30+/km pace.

I reached the 2:20 mark just after The Fort (where Embassy used to be). The last climb at 32nd avenue before the last turn to the finish wouldn't come any sooner as I hoped to finish running. 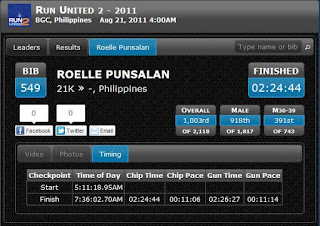 I'm happy with the 4-minute improvement (based on chip time) since my last half-mary last May (Goldilocks), but I've a lot of catching up to do in terms of my long runs. December's QCIM 42km is very tempting to register for, especially now that I've decided to resume my base-building via the Maffetone method. But without complying to doing the long run, another 42km via QCIM might turn out to be a waste of effort.

I'll probably go at it for 2 months of 143-max HR workouts as recommended. Going raceless will also be a consequence as I hope to prioritize building my aerobic engine before pursuing races. Or, I could still reg for races but will control myself from exceeding 143 HR. This would be good especially if I join half-marys just so I can follow my scheduled long run.

I just hope that this thing that I'm trying out will be rewarding in the end.