Rudy Biscocho's races are always something that I look forward to. He goes down to the very basics: reasonable registration fee, accurate distance, no chip (except for Milo Finals last year, but still reg was cheap at P150.00), no TV/radio ads, no celebrity endorsements, and timely/accurate race results. He's known to start races ahead of schedule (which I don't complain). Each and everytime, he's managed to pull through. If I may relay it to cooking, he always comes up with a perfect sinaing. Not burnt. Not watery. Not dry. Everything is just right ---even without pandan leaves.

Aside from Rudy, I registered for the Mizuno 2010 run to beat my 1:09 10k finish last year. That made the lure of this race irrestible for me. I know that I can finish a 10k less than 1:09 now but to cement it on this year's Mizuno Run would be special. If I took it easy, I know I'll finish around 1:05, a respectable margin of improvement. However, I wanted to see for myself if my 1:04:55 10k PR can be beaten.

The Monday before the race I did speedwork: 500m warmup, 2x1mile with 800m recoveries. Note that I've NEVER done speedwork before as I've been contented with tempo, easy short, and easy long runs only. Speedwork seems so complicated to do (even with a Garmin). Further, it was very (very!) tiring. I wouldn't run that fast on race day anyway, right? So why do speedwork?

I was probably influenced by this interval training video that I got from Banana Running's blog. Seeing those guys doing 2x1mile, 2x2mile, 2x1mile, 2x2mile left me aghast. Wow, that looks challenging!

Wait, a 5:57 mpk on a training run? Hmmm, interesting I thought. So I can run a mile on that pace? Hmmm, would it be possible that I can do sub-60 in the Mizuno Run?

Friday before the race was a National Holiday. Even though the race was 2 days away, the addicted runner in me managed to log 10 miles in 2hours 20mins easy pace. This would work either way for Sunday. That is, I might not recover in time or I'll be conditioned endurance-wise for the race.

Food intake before the race: 1 strawberry-filled Mister Donut bought from the Caltex convenience store along EDSA near Greenhills. Plus a few sips of Gatorade and a cup of water.

Starting corral position: about 10 meters behind the line next to the left sidewalk. I had to make my way through from the back though since I wound up running back to the car to get my sunglasses.

As the 10k race went off minutes before the 5:45am scheduled time, I was squeezing myself left and right to get my pace going. I can't help but notice this one guy in black wearing a white towel (not the Good Morning towel, hehe) wrapped around his neck. He was fast, mind you. He became my designated target for the race. Why? Wala lang. Probably because he was easy to find with that towel around his neck. Towards the end of km1 he was way way ahead of me so I've immediately forgotten about him and concentrated on my pace.

Is THIS possible?!?! Is this the fruit of the speedwork I did last Monday?? Naaah...hhhmmmm...it probably is! If I can sustain this pace until the finish, a sub-60 is very imminent. Yehehehessss!!!

The water station along Rizal Avenue was a good respite as I drank and doused myself with the cool water provided. As I turned left, the flat course will have a brief change in elevation as I expected.

The Kalayaan flyover. Yes, that THING. That looong climb to and fro just happened to sit there along Km3 of the route. I'm certain that I won't walk through it like what happened when I was first introduced to it early last year. The question was, will I be doing sub-6:00 mpk pace over it? Well, here's your answer:

That was just going to Makati. The climb on the way back will be harder as you'll see later on.

Amidst the irate drivers being stopped by the race marshals to let runners through, I was struggling to go back to sub-6:00 pace. As I neared the turn-around point, I opened my HammerGel and ate half of it. The turn-around point at N.Garcia was on the dot (5.01km on my Garmin) as I almost missed getting my loop-cord. I probably lost about 5secs there. Performance-wise, I was still ok. I felt like I was in one of my scheduled tempo runs wherein my running form (well, I would like to think) was doing alright. The first half of the race was over in 29mins and change.


Back to the Bridge

When everything was starting to fall in place, there it was again. The flyover. This time, the return route to The Fort comes with a vengeance because of the long incline passing over Buendia. Pace dropped considerably at this point, with km7 logging my slowest pace for the day. I really have to do more hill training!

Took the remaining half of my HammerGel at the Rizal avenue water station. As I neared the left-turn across McDo, lo and behold!

There he was with pace considerably slowing down.

He may have lost time going through the flyover, I thought. As I turned-left, I was able to easily pass him.

At that time along Rizal Avenue, I came into a realization that the possible cause of my left knee patellar tendinitis might have been caused by my gait. It was at this point that I observed the obvious: my left foot was outside heel-striking and heel-striking hard. As what I've read, heel-striking is actually disadvantageous since it acts as a brake and that secondly, and more importantly, it can be the cause of many knee injuries. That point has been well-saved on my mind as I will try to work it out consciously in my succeeding runs and races.

In my previous races in The Fort, particularly the half-marathons (except RunRio1), I'd often find myself considerably out of pace by the last 2 kilometers, i.e. from McDo to the BHS finish line. This time I was still giving my all but still comfortable. I calculated as early as km8 that 59mins is impossible at this point since it required me to make the last kilometer at a minimum 5:00 mpk. Ngeks!

Still, I ran as fast as I could as I reached the finish arc. My 305 registered 10.05km with its time and the finish arc time exactly the same as I pressed STOP:

Although I've yet to see the full race results, it was good for the organizers to email me of my own result hours later after the race:


Sub-60 just around the corner?

Yup, I'll surely aim for sub-60 on my next 10k race. The 1:00:57 finish time had improved my calculated full-marathon finish time to 4:40 and a half-marathon finish of sub-2:15. The latter I hope to achieve late next month during the 2nd leg of the RunRio trilogy. The 4:40? Hmmm....still unsure whether to join Milo Elims or another race later this year or Condura 2011.

For now, it's back to training. 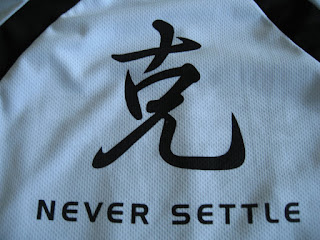