Analysis Paralysis (Or Why I Gained Weight)

You can analyze the past, but you have to design the future.
---Edward de Bono

I've been whacking my brain for a few days now trying to find out why I have gained weight since around late October this year. Prior to that, I was averaging around 167-168lbs but have gained around 3 lbs on average every time I weight most mornings ---despite continuous training.

I have a good idea that one major culprit is the weekend eating at restaurants and weekday lunch outs but I needed to get further info based on my training logs.

Good thing I use Trainingpeaks, which has kept a record of all my training logs since I first signed up (2014).

After a little Excel-ling, hehe, what I found confirmed my hunch.

Before I show you (7 or so faithful followers) the charts, take note that I have noticed the weight gain around early November.

Below shows my run and bike distance per week: 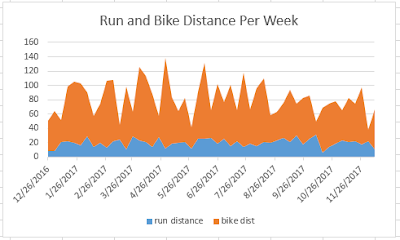 If you look closely, the bike distance (orange) started tapering off around August and has not gone back up to the 100km per week that I had on most weeks prior to that. The run distance (blue) remained constant up until mid-October which was a day after my first 21k race for the year. It hasn't come back up to pre Nutriasia 21k mileage after that.

Next up, we have the calories burned per week. It was hovering at around 3500-4000 calories per week up until that drop in mid October ---same time as mentioned above--- and has not recovered decently since then. 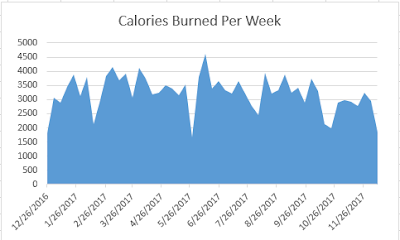 With that in mind, recall what I mentioned earlier that I noticed the weight gain around early November, gaining roughly 3-4 lbs (which I can't seem to bring down since then).

Next, I looked at the average for certain time frames for this year as I needed to get further proof of the drop. I was able to find the root cause (which only stated the obvious):

The decrease in run and bike volume per week since mid October to deprived me of about 613 calories that I could've burned. The run distance per week loss (-6.5%) was very minimal but the rides (-15.8%) may have done the damage.

I am able to back this bike distance per week deficiency due to Saturday am family obligations that I needed to attend to during that period ---which was the same sked as my weekly long ride (that contributes about 50% of my target ride distance).

What I needed for more analysis is the calories taken in per week (unfortunately I couldn't/wouldn't log my daily calorie intake) which could've made for a better study but the above will have to do for now. Of course, eating less would have to be a given due to the 80/20 diet/exercise theory but I guess I will have to be more conscious of it moving forward (bad timing now though due to the Holiday season, hehe) along with increasing my run and ride weekly volume back up again.

As family obligations will still be around and CANNOT be deprioritized, I will have to find my way around it to get my training done. Maybe wake up at an earlier time or work out during the evenings would be possible? Hmmmm....

As they say, knowing the problem is half the solution. Acting on it would be an entire thing on its own.