After taking up running last March and eating oatmeal-only weekday dinners, I've finally decided to have my blood tested for lipid profile yesterday. I've given it 4 months as recommended by my highschool batchmate who's a doctor to take the said test after all the hard work has been put in. Just to really see if there's any improvement.

Well, after 4 months, here's the result:

All have improved! WOW! Tenkyu LORD!!!!

As you can see, dramatic improvements in my cholesterol, LDL, and Triglycerides although the cholesterol still needs tweaking.

The only issue with this is that since my employer had to change health-companies this year, the interpretation of the normal range for these tests differ from one laboratory to another. Only the cholesterol normal-range is the same for both labs. Thus, I can't really say if my HDL had improved since if I use Medicard's normal-range, I'm still low on good cholesterol (pero 2 points lang) and high on bad cholesterol (7 points lang naman).

But still, it's a big improvement. Moreover that I've lost 11 lbs since January. The loss actually accelerated sometime March when I started running so I strongly believe that it has greatly helped (coupled with the missus' imposed oatmeal-only weekday dinners) in my weight loss goal. So thank you LA for coaxing/forcing me to sign-up for the Condura 5k last March. You have helped me find a sport that I've found to love (and get addicted to). 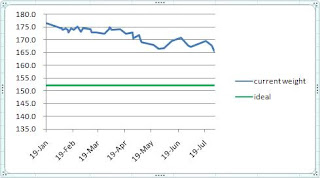 It's still a long way until I reach 152 lbs ---my ideal weight to reach normal BMI for my height. I hope to achieve it by the end of this year in time for EG's biggest-loser contest final weigh-in. Yup, I'm still gunning for that Zoom Kobe IV prize for the biggest loser.

So, from now until December (and maybe forever), I will continue running....