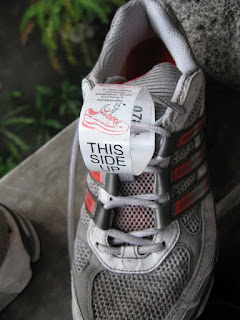 As mentioned previously, last Saturday's Company race was a chance for RunRio to road-test the paper-disposable timing chip or PDTC, if I may. Needless to say, my first 15k was over in 1:37. PR, of course. ;-)
The race results on the PDTC were very accurate. My 305 registered at 1:37:20 while the official race results timed me at 1:37:21 ---a mere 1-second difference.
Putting in the PDTC to your shoe might be a bother but not as difficult as the Championchip. For the latter, I would undo my shoe laces since I would like to have it firmly laced between eyelets. For the PDTC, all you need to do is loop it one eyelet below the actual place were you tie your shoe laces as below. 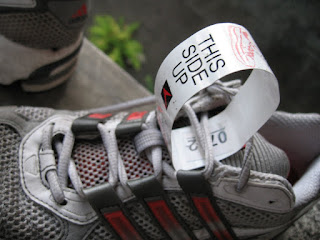 The sticky-tape is very secure so as long as you loop it as mentioned above, the PDTC won't fall off your shoe. Do take note as well to follow the "THIS SIDE UP" sign so that the circuitry is well-exposed.

Similar to the Championchip, you don't feel that it's there when you run so you can still run as you please. Regular Championchip users might become surprised with the PDTC when stepping on the timing mat since there'll be no "beep" sound heard. But don't worry, your time will be denifitely registered so long as you pass over the mat. The mat looks as below. It doesn't look like the Championchip's "mala red-carpet" mat, but it works. 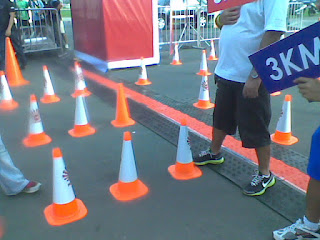 Of course the ECE/Macgyver in me wanted to pry open the PDTC to see what's inside since from the outside, all you can peek is the printed-circuit board (PCB). I didn't see any coil, resistor, or whatever so how does the PDTC get associated with my race number? The answer was less than a millimeter. 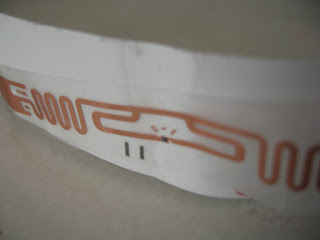 See that black spot in the middle? It's a micro integrated-circuit (IC) or simply, a micro chip! It's less than a millimeter as I've said, or, in colehiyala terms, it's teeny-weeny-my-gosh!-small!

Based on Rotas who manufactured the PDTC, the chip responds to high-frequency (or "HF" which is between 3 to 30MHz, common in two-way radios) and ultra-high frequency (or "UHF" which is between 300MHz to 3GHz common in mobile phones) waves that are emitted by the race mat that we step on. The chip has the runner's identification number (associated with the racebib number) so the info is accurately timed as the runner steps on the mat ---much like how Championchip works. Unfortunately the details of the chip-circuitry could be Rotas' proprietary since I didn't find any design detailing it on the 'net. But I'm pretty sure the circuitry is similar to the Championchip but micro-embedded to fit the IC.

So that's the PDTC in a nutshell. I do hope that reg-fees will go down once race-organizers use the PDTC in favor of the Championchip.