Arrived at the race venue with 30mins to spare. After placing my bike in the transition area I realized that I forgot to bring my bike shoes. This was a big bummer for me not just because my pace could slow down because of the reduced grip on the pedals, but also on the race photos (hihi). As things turn out later, this was not the only mishap that'll happen on the bike leg.

Race started promptly at 6am and the 6-30-3 duathlon was on its way. 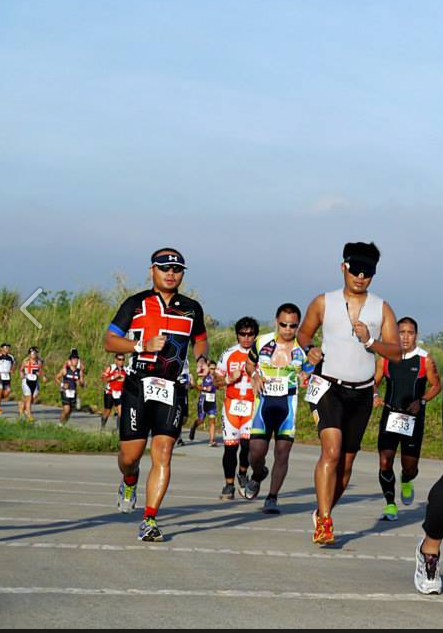 All that skipping of many of Coach's prescribed bike training workouts finally got back at me during the bike leg. I had a terrible (terrible!) time managing the long climbs up to the U-turn. I was pedaling but not on the pace and power that I wanted it to be. What added to the frustration was that I had to do this route twice to complete the prescribed 30kms (actual distance at 32km). I was regretting as well not focusing on tackling long low-grade climbs such as this one in Nuvali. To add further to my dismay, my chain fell off twice while was tackling two separate inclines. Had to stop and spend time to put the chain back on. It was a bike leg that I wanted to forget.

Things turned for the better when I started Run2 (3km). I found good pace and, IMHO, I was KILLING IT in Run2. Nobody, and I mean NOBODY was able to overtake me during that leg. Instead, I was overtaking left and right, even out-sprinting a fellow racer 10meters from the finish line. THAT was truly memorable. Total Run2 time = 18:34 (or 6:07/km average).

Next race will be on August and yes, I will concentrate on improving my cycling until then.