I started the race (Run1 = 10k) trying to zoom like everybody else. My Garmin showed 6:15/km lap-pace so I uttered the words above in order to calm me down from the excitement. I don't have the run training, I said to myself, so keep the pace down. I eventually slowed down to a little above 6:30/km.

As I was coming off a nasty groin injury which caused me little training on runs 2 weeks prior, I planned to take the run legs of this race at easy pace and just try to hammer it on the bike. The race adrenalin showed me another way, as I was able to pace between 6:30-6:40/km throughout the 10k ---even with my Brooks Pureflows on. Yes, I ditched my K-Swiss K-Ruuz2 racing flats as I was afraid that it's contributing to the groin pain that has been bugging me lately. It could be the deteriorating EVA-foam after approximately (just) 300km on that pair. Fortunately, I didn't have any issues during Run1 (including that groin pain) except for the heaviness of the shoe vs my racing flat.

I finished Run1 at 1:08 which was 4 minutes slower than last year. I needed to catch up.

The Remy Field to Raceway bike course is mostly flat, with long low climbs. This is the 3rd time I'm riding this course (1st was during the Dua C'ships last year, 2nd was when the family had a vacation during Q2 of this year so I practiced it) so I was pretty aware of what it holds for me.

As I passed Puregold on the way to Raceway, I started to feel a familiar cramp on both of my calves. I felt the same in last year's race so I gulped on water and Gatorade to hopefully appease it. After 10 or so minutes, it subsided. Whew!

The aero-wheels and clip-on aerobars did well to compensate for the additional 5lb weight that I now have vs last year. The result: a 7-minute improvement from last year's race. My only concern is that I was at 28kph average on the 1st loop but I got frustrated for not being able to sustain the pace during the 2nd loop. My lack of endurance training on the bike showed (my weekend rides would usually max at 40km only at pasyal pace).

Last year, I was blazing (IMO) in Run2 (5k). I was hoping to chase training buddy @lingerboy so I was running at sub-6:00/km pace on that 5k. I was still fresh at Run2 last year, and when I recall my post on that race I still feel proud that I was able to finish that race (my first duathlon, btw) strong and fast.

This year, I was totally different. This year, Run2 was where I found myself mentally in, but my body was just out of it. My thighs were heavy, like bricks, as I started off Run2. The heavy Pureflows didn't help my cause as it contributed to the heaviness (in hindsight, I should've brought my K-Ruuz to hopefully get me into better pace since I can use that pair for Run2 only). Resulting pace started at 7:15/km. I found myself doing walk breaks during km3-4. My lack of run training and 5lb excess weight really showed in Run2 as I was struggling to run at low HR. Well, I guess those last 2 Maffetone runs that I did during the week before may have saved me in keeping myself in to "just run" at whatever cost.

There'll be a lot of post-analysis after this non-performance. It'll be something that, like Manny Pacquiao's shocking loss to JMM last year, I hope to learn from and try to improve. Here's my tweet an hour after that race:

My preparations for next year's Dua Championships starts now. 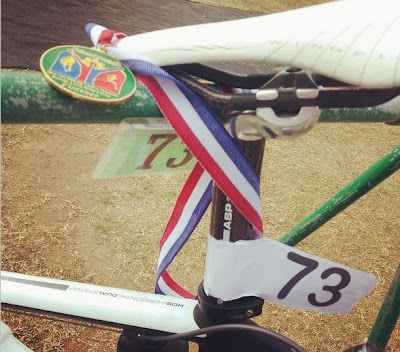