While on my long run last Saturday with @lingerboy, my Garmin 305 suddenly died. I couldn't press the up, down, and enter buttons after doing the recommended mode+lap reset that I saw over the Internet. It would power up for sometime (with no response from the buttons I mentioned above) and would die soon later. It was very frustrating as I had to ask @lingerboy what was our current distance and pace from time to time (although in retrospect I found it liberating not to depend on GPS and just run by feel ---something that I need to do to ease my dependency on GPS watches). I ended up with 14k that day and, with possibly a dead Garmin.

I scoured the 'net for 2 options: a possible repair solution and buying a new replacement. I was dead set on the Timex GPS watch or the GF405 since they were under my budget. If I sent the watch to the Garmin office for repair, it would be another PHP5,000.00 too. Tsk tsk, too much spending, I thought.

But then I saw this website. Being a techie, I just couldn't pass up the idea of opening my GF305 up. It's dead anyway, right?

After a few minutes, I was able to pull apart my Garmin with yes, just my fingernails. 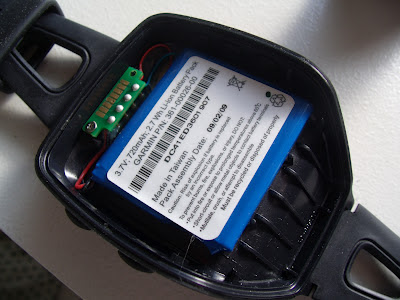 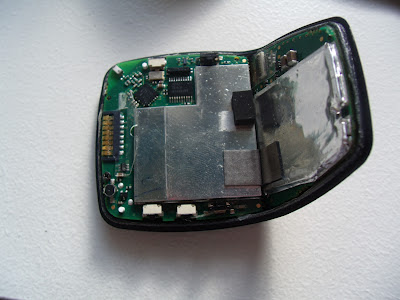 What I found out confirmed my initial thoughts: there was sweat that built-up inside the Garmin causing some of the circuitry to short. This was due to the hole that was covered by the serial number sticker at the back that peeled off over continous use. That could've been the entry point for all my sweat to get into the watch. I got a cotton eartip and scraped away all the liquid residue that I could see. For insurance, I sprayed contact cleaner on both parts, cleaned the excess with another ear tip, and let it dry for 24 hours.

After both parts dried completely (24 hours at least), I hoped for the best, put together the two parts, and tried it again.

Lo and behold, it's FIXED!!! The up, down, and enter buttons are now responding.

That saved me at least PHP5,000.00 in repair or even more if I bought that Timex GPS.

Now I haven't sealed the two parts yet since I need to buy a rubber sealant (which could be my only cost for all this self repair). So I'll probably stick 'em tonight and let it stay for a few more days to make sure it's air, water AND sweat tight.