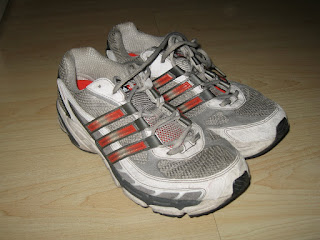 I've had these Adidas Response Stability pair for a year, making its race debut at QCIM 2009 10k and then wrapping up with the Milo Manila 42k Elims last July 04. The shoe has served me well, spanning 10k's to several half-marathons (2:18 PR from last Feb still stands) and of course my first full-mary. The wear on the outsole, especially at the heel, is fair evidence of the mileage that this shoe has gone through. I estimate that I've logged about 700-800kms with this shoe, races and training included. 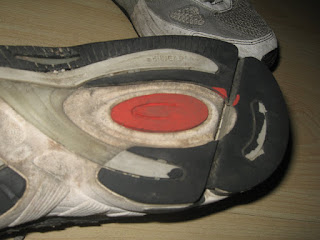 I'm a sucker for being sentimental towards things, but last weekend's supposedly 18k that turned 14.6k has prompted me to upgrade my gear. Specifically, I'm not really getting along well with my Asics Gel Foundation 8 during long runs, especially now that I'm slowly getting accustomed to midfoot strike. The Foundation 8 is just plain heavy midway into the long run. Maybe for 5-8km easy runs is ok, but any longer than that, it feels like running with ankle weights. The morning sun heating me up that day didn't help as well.
Secondly, I'm trying to save on the mileage of my Newton Distancia Racers. These babies are excellent as well as expensive, thus there should be an alternate shoe to complement it during tempo, speedwork, and races.
So I made my contribution to the Adidas Refresh Your Gear promo by saying goodbye to my Adidas Response Stabilities during lunchtime today at Adidas Trinoma.
Or, a more apt way of saying it was......
...........................Adios! 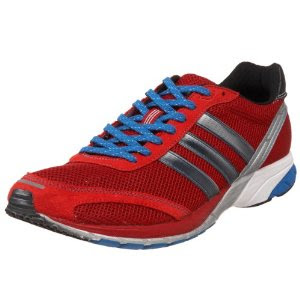