After Googling the 'net for a good running quote for my vanity bib, I ended up with the above the night before the race. This was going to be my 3rd 21k since EcoDash and Milo. As you may recall, after setting a 2:24 official time at EcoDash, I failed miserably at the Milo Finals, finishing at 2:41. Adidas KOTR was going to be a crossroad of sorts for me in terms of success or failure trending at the 21k distance.


How did I prepare for Adidas? After Milo, the two-week preparation ended up with the following:


Long runs were left wanting. Weekly mileage was low. If I could go back, I should've skipped QCIM in exchange for a long run (probably 16-18kms) to get my endurance and mileage up. But, unfortunately, whatever preparation I've made will have to do for Adidas.


Nutrition before and during the race was now considered as well. Recalling again Milo, I didn't eat anything prior to the race except for the Sport Beans. During the race it was 2 cups of banana from the aid station at around km16 but I think that was too late already. This may have been a contributing factor for a poor pace at km18-21. Hence, the 2:41.


Sunday, 4.15am. The phone alarm went off and I was up preparing my gear. I ate 1 banana and two Sport Beans before driving to BHS. I purposely left my headphones at home since I wanted to see how I'd perform without soundgear on a longer distance (QCIM 10k last week proved to be a good decision not to have soundz, finishing with a personal-best of 1:04).


5.15am. I ate a 2nd banana and a gulp of water just before leaving the car after parking at BHS parking lot.


5.22am. I distinctly recall the timer amidst a sea of yellow on the starting gate counting down from 8mins+ to gun time when I arrived for check-in. I said hello to some of the company bosses on their 21k debut and went on the right side near the back to do my stretches.


Km1-5. My Nokia GPS tracker went berzerk again no thanks to the tall buildings. Recorded pace, however, was at 6:00/km but I think I was settling at around 6:30-6:45/km. I felt good at this stage, passing by the dreaded Kalayaan-Buendia flyover towards Ayala. The first water station was filled with runners so I had to skip it and get hydration from the next. It was a sight to see the front-runner of the 21k, a Kenyan, by his lonesome going back to EDSA already. It really shows that we Filipinos have a lot of catching up to do in the sport (panalo ba naman sa QCIM, SIM, and now KOTR!). It was only after 2-3mins when the next two runners, Filipinos, passed by me side-by-side. A minute or so later, you won't fail to notice the 4th runner leading the pack with his patented Afro-hair freely bobbing up and down as he strided wearing a red TIMEX singlet: Coach Rio. Everyone was just clapping and cheering for him to catch up with the first 3 runners.

Km5-8. Noticed a water station complete with bananas and salt. Btw, what's the salt for? A DeLaSalle cheering squad was noticed as well distributed on most of the water stations. I would've liked it except for the cono cheers like "Let's go runners!" in that familiar college-cono twang. Anyway, I decided to grab a banana on my return trip.


By Km8 on the way back to EDSA, I was approaching the U-turn slot for the 10k runners. Seeing 10k runners left and right overtaking me on their (I assume) negative-split pace, it was mentally-challenging not to try racing with them. My pace, still between 6:30-6:45/km, was a 7/10 effort on my part to conserve energy once we approached the hills (Mckinley). My plan was to be at that pace up until km16 and just go for it at the last 5kms.


Km9-11. I made my ceremonial (i.e. mandatory) water-station gulp before trecking up the Kalayaan-Buendia flyover. It was easy this time since I may have gotten used to the incline, being my 4th race traversing through it. Runners who may have underestimated the return trip started walking on their way up. I was climbing it easily at a manageable, probably 7:00/km pace. I win. Flyover loses. Score: 4-1.


Km11-13. Took 2 Sport Beans at the Rizal Ave water station. I was hoping that my pace increased at this time before I slow down again in preparation for the hills of Mckinley and Bayani but I couldn't, or should I say wouldn't. I got scared that I might run out of gas again like in Milo so I just continued my 6:45/km pace. Passing by the km12 marker I did some calculations. Still below 7:00/km so I'm doing good. No need to rush. Running Fatboy, about 2mins behind me after the Buendia-QuirinoHway turnaround, had now passed me after the corner of 5th and Mckinley Parkway.


Km14. From my calculations I was 2mins ahead of the estimated total time of a 7:00/km pace. Still doing good. It was time to pullout my last chibog for the race: a bite-sized Hershey wafer rice crisp bar that I grabbed from my son's supply from the ref (hehe). I was able to consume it just before turning left at the hill-paved Bayani road, gulped a cup of water from the water-stop and off I went.


Km15-18. Bayani Road is hills hills hills going towards Heritage park ---and back. At this time I was frequently feeling pain just below my right rib which I initially thought was due to poor breathing. I recovered my breathing but still the slight pain was there. It may have been caused by the 3 bananas and the hershey bar that I ate so far. Ugh! It was more of irritating than painful. It took a while before the pain had subsided, probably by km19. I saw Bald Runner heading back to McKinley along km16.


Midway at km17, a male runner called me from the back and said, "Hey Peter! I'm going to be strong today!" and passed me. It's safe to say that he got that from reading my vanity bib. Nope, I didn't know the guy. I wanted to shout, "My name's not Peter! It's just a quote I got from the 'net!" He was probably at 6:30/km pace so I lost sight of him soon thereafter.


Km18. The water station that used to be there was now packed up. Balde-baldeng tubig na lang ang natira. Realizing that this could be my last water stop, I scooped a pitcher from one of the large containers and just poured it all on my face and my neck to refresh me for the final push. My calculations at this point were worrying since, apart from taking a long while to calculate due to fatigue, hehe, I realized that I was only 1minute ahead of the 7:00/km total race pace.


Km18-20. The last and final push. The Detroit Marathon mishap kept bothering me as I wanted to increase my pace. The thought of collapsing like those 3 unfortunate runners at the race got me worried. I know I won't collapse, but what if I overexerted myself and ended up with my face kissing the road? The thought was just too strong to bear. But I still managed to push, fighting each step, probably pacing already at 7:30/km. I was near breakpoint but not yet dead like in Milo. I was still relaxed and enjoying the run as I made a right turn at 26th street.


Km20-21. I was really really trying to push hard. Looking at my stopwatch as it read 2:24, EcoDash will not be beaten, but not for my Milo time. That "2:41" reading has plagued me for the past two weeks, seemingly teasing me on how poor I performed back then at Milo. Now, as early as Km20, I knew IT WAS SOUNDLY BEATEN. FINALLY this monkey was off my back!

I've decided at this point that I wanted nay, NEED, to finish below 2:30. The two 10-second walk-breaks before I turned left at Serendra had to be done probably due to fatigue and nahawa din ako dun sa kaharap ko. Plus, a rest before one last push.


Final turn towards the finish line, I could clearly see the timer from my vantage point that it was already at 2:29:00. DAMN! Mukhang di ako aabot! I decided to forget all my worries and just ran hard.


I looked above the timer as I crossed the finish line triumphantly, raising my right hand in a fist....


After the official took my racebib tag, I looked around if anyone was handing out medals for half-mary finishers. None. Oh well. I was still panting at this point from the last 100m "sprint" that I did, looking for the Gatorade station. Took a while to get a bottle (which I consumed in seconds). I then got my race certificate, got back in the car and headed home.


The drive home was a happier one compared to Milo. I felt better after this race because of my 2:29 finish. I'm back in the game to improve my time. I really learned a lot from my Milo experience and poured it all at KOTR (except for the need for long runs which I need to schedule in the weeks ahead). In a way, I feel that I'm still at the lower-end of the learning curve which challenges me more to train harder to beat my time(s).


Yesterday, I reviewed the actual race route on GoogleMaps. It turns out that the 19kms that I plotted weeks back based on the printed racemap the organizers gave was not the same as the actual route. When the actual route was plotted on Google Maps, it showed 21.28kms. The distance was accurate for a half-marathon. Wilson was right: RACE events usually don't have distance problems, including this one. It was just a misprint on the racemap on the registration form. 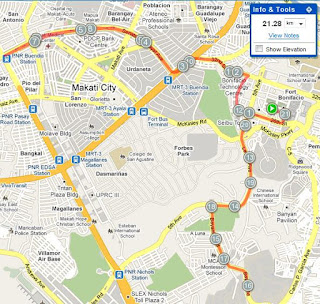 Congrats to RACE and Adidas for putting up a great race! I hope for another KOTR on 2010.


What's next for me?


I'm still undecided if I want to list for the Timex 21k or the 10k Run Against Climate Change in UP. The latter would have to include an extra 6km run to complete my half-marathon training that I made from Runner's World Smart Coach. After that, it's the Nov29 rescheduled NB 21k race.


For now, it's back to my regular training. Tempos and Short/long easy runs await.