...until I bumped into Obet (after meeting Elvis along km1).

Obet is my high-school batchmate whom I played regular Saturday football with during my alumni years. Having started racing last year as well with a string of 5 and 10k races (sub-30 and sub-60, mind you), Condura was going to be his maiden half-mary. Since he'd often see my FB status updated with my latest half-mary results last year, he always commented that he would like to debut in the half with me as his pacer.

So, with me on lead, I paced Obet and my group of virgins until reaching the foot of the Skyway. Except for km1 (we were all squeezed in due to the large 21k contingency coming out of the starting corral), the group was doing well ok.

Until everybody just zoomed out. Except me and Obet.

LA and PC, a duathlete and triathlete respectively, decided to move ahead as we climbed the Buendia off-ramp. MP left us around km 8. I knew that if I paced with MP (a 1:39 15k finisher in last year's Slimmerun) I would've finished around 2:23-2:24. But, call it stupidity or plain concern for Obet who was panting heavily as we made our way over Magallanes interchange, I stayed with him. This wasn't part of my 7-week plan but I knew I couldn't leave him alone. At first I thought I would still be able to chase LA, PC, and MP since I was certain that mauubusan sila by the last 5kms. By the turnaround point, strangely enough, I didn't care about my time anymore (I was at 1:12 when we reached km10) as I tried to keep his mind away from the onsetting fatigue by exchanging stories. Amazingly, I myself wasn't tired at all after km16. Siguro it really is true that running with a buddy can ease a run.

As we neared the end of the Skyway (which was a nice route btw. Thanks Concepcion brothers!), we were expecting his neighbor, a last-minute requested bike support, to join us. I thought that since Obet will have someone to be with him in the last 5km, I can start speeding up.

So, just after hopping on back to Buendia, I left Obet. I felt that he'll be able to finish and that finishing the last 5km by himself would make it more special on his debut.

By km16 my average was at 7:11/km. Veeeeery slow in my history of half-marys. A sub-2:30 could still be achieved I thought. It might still be possible to chase my officemate virgins before the finish. And so, I zoomed.

I couldn't keep up with the sub-7:00 pace by km19. Blame that on cheating on my speedwork/tempo runs during training. By km20 I overtook 3 people I knew (including our company CEO who was screaming, "ang sakit na ng tuhod ko!" as I passed him). But there was no sign of LA, PC, or MP.

They may have already finished. As I descended the Buendia flyover return-route (with no problems on the challenging incline) my 305 beeped 21km.

As I reached the finish arc, the timer above it signaled 2:36.

I was off target. I wasn't as fatigued as my previous races, but still off sub-2:30.

I can only blame myself as I decided to stay with Obet until km16. I could've left him around km10 and still managed to eek out a sub 2:30 but I didn't. Thoughts of "why? why? why?!" entered my head as I lined up for my medal.

The feeling was gloomy. 7-weeks of training, scrapped by a last-minute request by a virgin to be paced. Stupid right?

That feeling changed somewhat as I checked my FB. I was mentioned in Obet's post:

It truly was a great opportunity to be able to guide a newbie to his first half-mary. As I write this post, I feel better that I stayed with him most of the way. Runners are always in a race for a better finish-time, including myself pre-Condura. But I had to scrap the plan in favor of not letting my teammate down. Right now, as I write this post, I'm glad I did.

***
The Condura run is something I would like to join again next year (oh please you got to have one again next year, right?! Baka mag-full na ako nun! hehehe). Rudy B was at his best again. I've no complaints whatsoever (the racebib barcode issue? Come on! You know how to write numbers, right? So, stop whining. Hehe).

Thanks as well to the Takbo.ph-ReinierPacific Aid station (saw Jinoe and Sir Amado) as I tried to zoom off on my way back to BHS. You were all great!

***
Looking back at my km-splits (this Garmin Connect on the web-thingy is so helpful), I feel that I need to improve more on my tempo runs. If I did it longer, I would've managed to cruise to a sub-7:00 mpk pace from km16 to the finish line. Well, I *think* I could.

I'll revise the usual warmup-tempo-cooldown program of Runnersworld to a recommended tempo run for half-marathon as mentioned in another Runnersworld article. I hope (I hope!) to follow it this time.

Why? Well, Century Run is coming up. I've registered for the 21km event as early as two weeks ago. This time, I'll be begging-off from virgin-pacer duty. A sub-2:20 is a hopeful target come Feb21.

On a side note, I'm glad the missus encouraged (more on "sales talked") me on buying a condo along 5th avenue 2 years ago. We've been sleeping there during weekends recently so there's no need to wake up that early for races). Just a 1-km walk to BHS is a good warmup/cooldown in itself.

I'm not a fan of condos, but I just could not resist the need to wade my tired post-race body into that ice-cold swimming pool with my kid after I arrived from Condura. 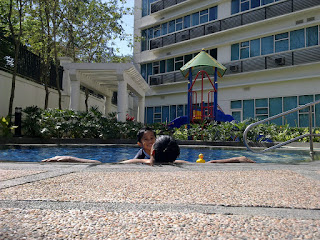