I was probably about 80% ready for this race since I've done this dua several times. The run1 and run2 legs were going to be flat, which was a great relief for me as I never got to pick up the weekly mileage leading up to this race. This was the same for the bike, wherein my longest was a sole 2.5hr chillax ride in Nuvali peppered with Trainerroad workouts here and there.

Run1 went smoothly as planned with an average pace of 6:36/km. It was then off to the bike leg where I will see how my Trainerroad sessions since Nov 2017 will pay off. I set my Garmin such that I only see the Ave 3s power, cadence, and speed. The power value took half of the screen which is what I wanted since I want to look at it to ensure that I am well below my FTP.

Went aero by grabbing the aerobars during the flat and downward sections whenever I can (which is probably the reason why my right lower back is aching since Monday night, hehe).

Average speed for the entire 55.4km bike leg was 26.5kmh ---a modest improvement from my 25.8kph recorded in the same race last year (though with a longer 62km distance). Take note: same bike, but different engine. ;-)

Run2 started off well in the 6:30s per km but drifted off from km2 to 4 in the near 7:00s. I'm not sure why this happens often (I experienced the same in the 2017 version of this race). I'm guessing that it's probably over fatigue from the whole race effort that the body starts complaining by that point. Run2 average speed ended at 6:56/km which is almost the same as my 2017 Run2 (6:58/km).

I'm thinking of ending my 2018 race season here but we'll see. There's a couple of good duas in the coming months but with current load in work and personal stuff, getting a good performance out of it will be tough. 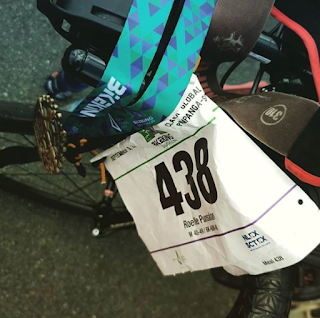