After my 3rd marathon (QCIM 2012) I got a long reply from my post-mortem log from a person who simply signed as "Running Conscience." His comment (I assume it was guy) was very constructive as he gave me several helpful pointers in finishing a 42k under 5 hours. One of his tips was this:

In my current training plan for marathon #4, nailing a 21k in 2:20 would become my checkpoint before my final test. If I can't accomplish it, then my hope of a sub5 42k would diminish rapidly.

Brooks Run Happy 2 will be checkpoint #1.

My race warmup took longer than usual since the gun time was moved from 4:30am to 5:00am. It was a 1km walk followed by a 800m jog around the BGC parking lot just near the starting gate. My right calf and foot seemed to be still asleep as it felt stiff throughout the warmup. I was even contemplating on not starting the race as I can't seem to "wake up" my muscles there.

As 5am neared I walked to the starting corral and was greeted by the race org staff handing out GU gel, Tri-berry flavor. I hesitated at first in taking one since I've already 2 Hammergels in my pocket, but eventually taking one. That would prove to be a wise decision later on in the race.

I was still finding my rhythm (and my right calf muscle and right foot) by km1 as the 21k crowd started to space out. I logged around 6:59/km here.

Even with the heavy Greenwich family dinner (7 slices of pizza maygad!) I felt hungry by km2. I took one my Hammergels since, anyway, I had an extra gel courtesy of the giveaway at the starting corral.

By km4 (I think) I found Dennis of Running Fatboy. We chatted for about less than a km about, what else, running! RU2, T2N, his last trail run. Those few minutes of respite made that uphill trudge just past the chapel seemed a bit easier. Just before the right-turn to British School (or was it Japanese school?), I bid Dennis goodbye as I had a task to do: a 2:20 finish.

I started to get my rhythm after that, logging around 6:20-6:30/km laps. The pace felt comfortably hard if I were ever to describe it, checking on my lean, the way I hold my fingers (not in a fist!), and a quick turnover of my feet.

I took the GU gel at around km8.

At Buendia Avenue, I managed to control my pace ( as it was downhill towards the train tracks) since I lost many of my races here. I learned to slow a little since it will be a long and gradual uphill from the turnaround back to the famous killer incline of the Buendia flyover. There were people going past me left and right but I didn't mind. "I'll catch you later," I thought.

My K-Swiss K-Ruuz still has a problem of getting in very small pebbles, a complaint that I've read in other shoe reviews as well. I had to go to the side of Buendia (in front of Caltex) to remove my right shoe to just get rid of that small pebble (around less than 1mm in diameter) that irritated my every step. I probably lost 30secs to 1 minute in that episode. Sigh. The K-Ruuz is a very good racing flat IMHO but the constant pebble-getting-in incident in most of my runs is just racking up the negatives.

True enough, I was able to keep my pace not going faster than 6:20/km by the turnaround point. As I began the long way back, I was able to maintain a comfortable rhythm as I began to pass many of the runners who started walking or slowing down. I wanted to walk or slow down too but I had a goal and I wanted to meet it. It was really a mental effort to control myself from giving in to rest, but I managed to do well.

By km15 my mind was telling me to take another gel. I fought the urge and took it (my last gel) a km later. Normally in 21k races I would take at most 2 gels. This was the first time I took 3 (along with 1 banana that I got from the aid stations). Fortunately there was no bloated feeling that happened and I was able to continue on with my race.

Buendia flyover return route a.k.a. killer incline was a mighty effort of a climb but I was still able to manage it. By the peak of the climb there is always a temptation to rest but I trudged on as I know that my breathing and heart rate would normalize since it was already near flat by then. I overtook a few more people at this point.

The other climbs of the race route were still many and became more challenging at every turn: Rizal Avenue, 5th Avenue, and that long climb at 26th street. But I managed to survive although pace started to slow down at the 6:40-6:50 range. I recovered on the last couple of turns around BHS towards the finish.

After a short sprint duel with a guy wearing a Greenhills Tri suit (in which I won on the line, hehehe), I glanced at the time:

By the skin of my teeth, I passed my first checkpoint. The day's result proved promising although I still need to log more long runs as I've only less than 8 weeks before marathon #4. 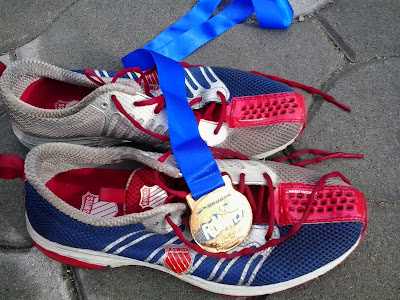 1. Nice singlet (although I wore my Milo singlet as a habit)
2. Great support on the aid stations. Water, 100plus, sponges, bananas.
3. GU gel giveaway at the starting corral.
4. Timely posting of official results.
5. Nice race route (as usual)

Cons:
1. No chip. For P750.00 reg fee it should've included a chip in the racekit.
2. Better info dissemination of the adjusted gun times. They should've sent out an SMS broadcast to all runners for this, not just email or web post. Sayang din yung extra 30mins na tulog. ;-)