The Kawauchi In You

It was several months ago on a lazy TV-surfing Saturday morning that I stopped the channel at Star Sports when I saw a recap of the 2011 Tokyo Marathon. Running events are rarely shown in ESPN or Star Sports, so seeing a big race such as this was a warm welcome to this running addict.

I was particularly amazed at this runner on the last 3-4kms of the race, a nobody named Yuki Kawauchi (wearing bib 16) of Saitama Prefecture, Japan. Months passed, and I got reminded of him again when I read an article of him from Running Times the other day. Watch the Youtube video below so you'll know what I'm talking about:

Amazing, right? His determination (as seen on his face) paid off. Coming from behind, he finished third overall (behind an Ethiopian and a Kenyan) with a stellar time of 2:08:37. 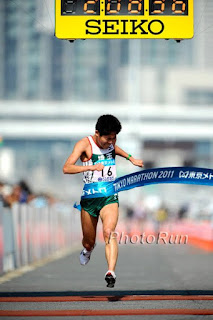 What makes him more amazing is that he's not corporate-sponsored, unlike many elite runners out there. He's an everyday office worker, like many of us are. It's really inspiring the way he manages his work and training to be able to run a race such as that in Tokyo. He's an example that if we just put our mind into logging the miles and train hard "because you love to run," then you'll get results.

Here's Yuki with his words of inspiration: