1. Great race venue (Nuvali)
2. Adequate and good race marshal work considering there were 1,500 duamans this year
3. Some improvement on the gun start time versus last year (6:15am this year vs 6:30am last 2016)

1. Inaccurate Run2 distance (it measured 2.1km instead of 3km)
2. Racekit claiming should've been via package delivery instead to avoid hassles on queuing up hours before race day

Coming off from the PhilDua Leg2 race 2 weeks ago, I arrived into the race losing a bit of fitness but was fresher due to the self-imposed (i.e. lazy) low volume days before. Target was to beat my 2016 PR of 1:56 for a 6k-20k-3k distance.

Run1 started off too fast (5:45/km on the 1st k) so I adjusted my pace to my target 6:20/km but to no avail. Being the competitive guy that I am, I wanted to finish faster than an old high school friend turned triathlete that I met on the starting line. Average pace for Run1 was at 6:08/km ---waaayyy too fast for my own good (HR maxed at 170!) which I know I will pay for dearly on the latter part of the race. Took a gel midway btw.

Onto the bike leg (after running thru the 250m(!) long transition area), where Nuvali's route has been all too familiar for me since I frequent riding there on weekends. It was somehow difficult for me to monitor my wattage, speed, cadence and HR as my 920xt wasn't mounted on the bike for easier view. I had to glance at it which was strapped to my wrist (naturally) to be able to see how I was doing. However, as this proved bothersome to do in the middle of the race I just rode by feel.

Nearing the turn around point, I was overtaken by Dingdong Dantes, a famous local actor, on his Cervelo P5 bike. Again, being competitive, I challenged myself to make him my target for this race. It was a game of cat and mouse from then on as I led on the climbs but he would come back strongly on the flats and descents (possibly having a more aero bike than mine). He arrived at the transition area about 10-20 seconds ahead of me. Gel taken midway in the ride.


He was able to rack his bike earlier than me since his was nearer to the bike exit. I had to run past him (with my bike) to my rack area to change to my running shoes. I was able to finish this quickly and glanced back where he was: about 10 meters from me but was caught in traffic by the other duathletes transitioning as well. I was able to exit to Run2 about 10 seconds before he did.

Run2 in duathlons are the hardest, and it makes you pay for all the overconfident speeding that you did on Run1 and Bike legs. I was running on full gas (and high HR!) from then to the finish, with Dingdong just meters behind. I was holding onto dear life and was fighting the urge to stop or walk. I kept my effort in check (6:26/km average for the entire 2.1km Run2. HR maxed at 170 yet gain).

An improvement by almost 10 minutes! :) 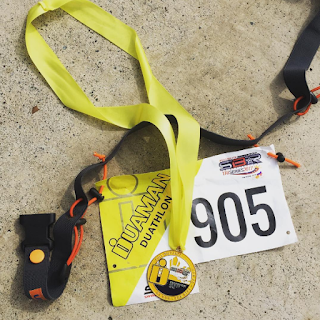 My race performance here just goes to show that if I want to race faster, I can really do it if I put my heart and soul into it. Heart rate though needs to be lowered at such paces, probably due to a lot of excess weight that I need to carry around while running and riding.

Hopefully I can find the solution to lose the extra 10 or so pounds before my next duathlon on August.

Yup, it's my A-race for the year: the BikeKing Duathlon. My revenge race from a woeful DNS from last year.

Now THAT will need a lot of work to get there in race ready (and PR beating) shape.